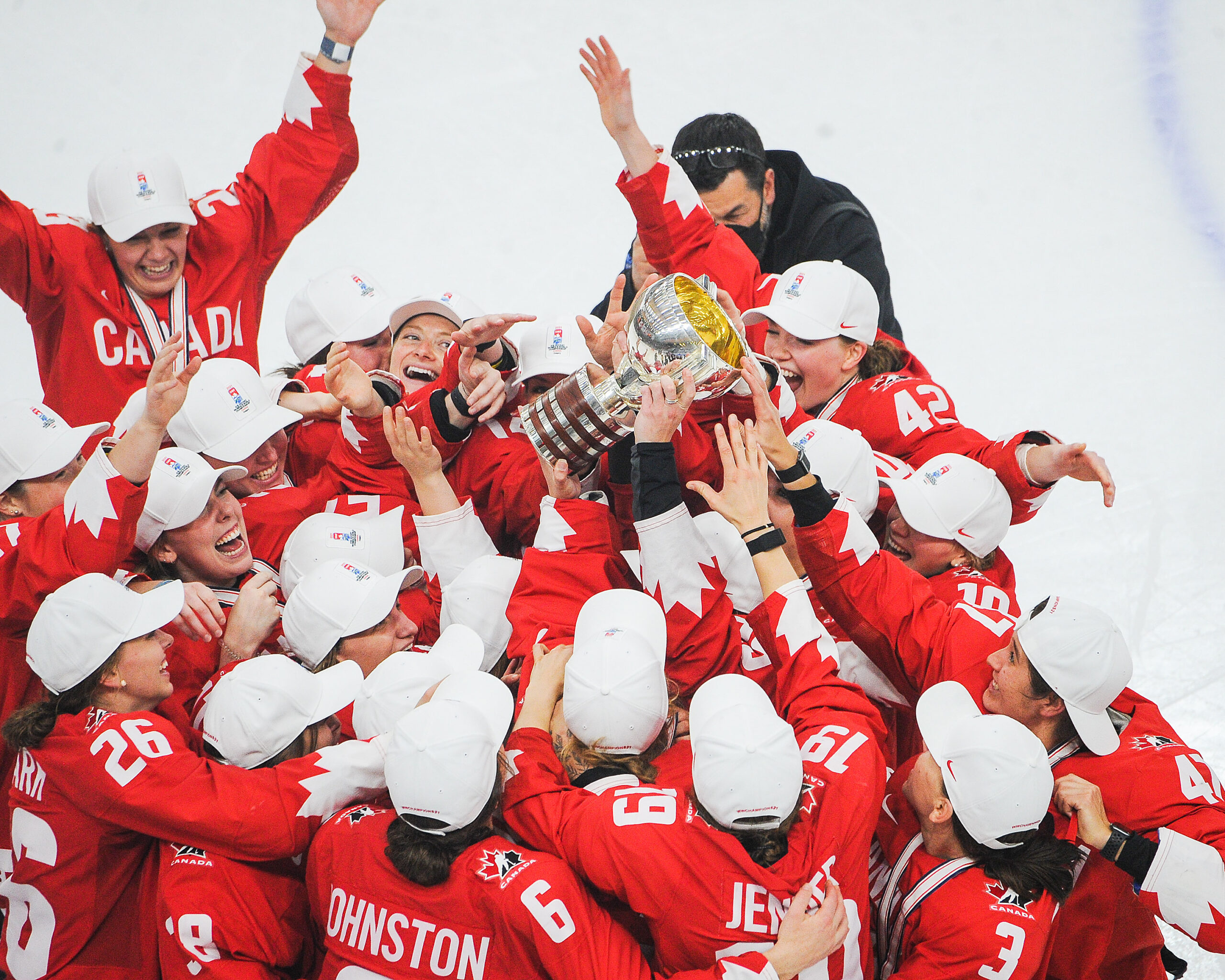 Although the lead up to the 2021 International Ice Hockey Federation (IIHF) Women’s World Hockey Championship was challenging and felt like a long time coming, the 11 days of the tournament flew by. The games are over, and the medals have been handed out, but it was a historic tournament on a number of fronts. Canada won their first gold since 2012, the all-time tournament scoring record was broken by Hilary Knight, and though Finland wasn’t able to return to the final to try and win the elusive gold, they won their all-time record 13th bronze medal at the championship. We also saw the debuts of Hungary and Denmark in the top tier and watched Hungary record their first win with a 5-1 victory over the Danes. Japan also had their best tournament ever (finishing sixth), and earned a spot in a quarterfinal matchup against the United States.

With so many notable and emotional moments to pick through, it’s hard to narrow down a top three. The greatest rivalry on ice is Canada against the U.S.A. in women’s hockey, and those matchups always provide a number of significant moments. But, you’re mistaken if you think women’s hockey is still only about two teams. Yes, this list includes moments from the top two teams of the tournament, but I encourage you to revisit Hungary’s historic win and Japan’s momentum-building play, and watch for these and other countries to continue to build their programs in the coming years. If hockey fans want to see the game grow, we need to support these moments and performances. With that, let’s get into the top three moments from the tournament.

The 2-0 lead proved to be the most dangerous lead in the tournament. Team Canada came back against a 2-0 deficit against Finland in their first seeding game (and did it again in the final) and Switzerland stunned the Russian Olympic Committee (ROC) in their quarterfinal matchup on Aug. 28. Switzerland had only scored one goal in the tournament heading into the game, and it just happened to be against ROC in seeding play earlier in the tournament. However, Alina Müller, who scored the goal and led the 2018 Olympics in scoring, suffered a tournament-ending injury in the same matchup. Offence had to come from elsewhere.

The top line of Lara Stadler (captain), Phoebe Staenz, and Alina Martia generated the most offensive chances for Switzerland throughout the second and third period, but it was the second line of Evelina Raselli, Noemi Ryhner, and Dominque Ruegg that got Switzerland on the scoreboard first near the midpoint of the third. A quick 2-on-1 was finished with a beautiful move by Raselli to boost Switzerland’s momentum. The top line followed suit with their net empty and just over two minutes to play in the third. A desperate ROC clearing attempt was blocked by Lara Christen at the blue line to keep the power play in the offensive zone. Christen passed the puck to Staenz who, hugging the boards high in the zone between the circle and the blue line, turned toward the goal and fired a slapshot passed the short side of the Russian goaltender.

The game felt over in that moment as the momentum had completely shifted in Switzerland’s favour. It didn’t take long — nearly five and a half minutes into overtime — for Switzerland to finish the game. A beautiful one-timer finish by Laura Zimmermann on a quick sauce pass over the defender’s stick from Sinja Leemann put the game away. Ultimately, the tide turned much earlier when goaltender Saskia Maurer entered the game in place of Andrea Braendli at the 8:32 mark of the first period. Maurer stopped all 28 shots she faced. As is often the case, the confidence seemed to go to the feet and hands of the team. Switzerland lost to Canada in the semifinal matchup, but the Swiss will head home with the experience and satisfaction of a great comeback to carry forward.

You could see this big moment coming, but that didn’t take any significance away from it when it happened. Knight only needed one goal to tie the all-time scoring record at the IIHF Women’s World Championships. She tied fellow American great Cammi Granato in the second game of the tournament for the U.S. Then, on Aug. 24 against ROC, she broke the record by scoring her 45th career goal at the worlds. She added two more goals in the quarterfinal game against Japan, who showed much respect to the newly anointed record holder despite also suffering a 10-2 defeat.

In that same match against Japan, Knight’s three points pushed her passed Granato to hold the all-time points record for an American player at the championship with 80 career points. She now sits third all-time in world championship points behind Canadians Hayley Wickenheiser (86 points) and Jayna Hefford (83 points). These records simply add to Knight’s incredibly storied career at the international and professional levels. Deservedly, there was a celebration of Knight happening throughout the tournament with each point and through the recognition from opponents. Despite what might feel like a tough loss in the moment, Knight took home her third silver medal to go along with eight gold from the world championships.

Despite a fairly lopsided seeding game where Canada beat the U.S. 5-1, the Americans put the pressure on Canada early in the final. Canada had come back from a 2-0 deficit against Finland early in the tournament, so they had the strength in them to battle back, leaving little chance that this game wouldn’t end in dramatic fashion. The teams traded dominant periods where the Americans scored two goals in the first (both from Alex Carpenter) and the Canadians tied it with two goals within two and a half minutes of each other in the second (on a beautiful move in tight from Brianne Jenner and a classic redirect in front from Jamie Lee Rattray). The third period was much more evenly matched as four stick infractions cut into the pace of play, including a tripping call on Canada’s young phenom Sarah Fillier late in the period, but the U.S. wasn’t able to capitalize on the power play.

If overtime didn’t already feel necessary at the end of the second, it became real after no scoring in the third, and the script seemed to be written for Canada’s captain Marie-Philip Poulin. She was on the 2012 gold medal-winning team and collected four silver medals and a bronze since, but had yet to win gold as captain of the national team at the championships. She battled injuries in the previous tournament and missed the seeding game against the U.S. after blocking a shot earlier in the tournament. But when overtime came around in the gold medal game, she stepped up.

On a 2-on-1 that materialized into a partial breakaway for Poulin coming down the left side, she leaned on her left hand, which sat low on the stick shaft and ripped a shot over the goaltender’s left shoulder. The puck hit the cross bar, the far post, and then bounced off of the ice and out. As one of the most confusing finishes, it was accurately captured in the voice and call of TSN play-by-play announcer Rod Black as he exclaimed, “She shoots… oh… she says she scored! They’re saying no! Poulin said it went in the net!” As play continued, a buzzer went off in the arena, signifying that the video goal judges had reviewed the play and determined that the puck did cross the goal line. That’s how Canada won the 2021 IIHF Women’s World Championship.

Of course, key players on the back end locked down multiple attacks from the U.S. while Canada fought their way back into the game. Veteran defenders Jocelyne Larocque and Renata Fast held their ground while providing an offensive push (Larocque assisted on Canada’s final two goals). Goaltender Ann-Renee Desbiens arguably had a shaky start, but she settled in after the two first-period goals against and stopped multiple high-quality chances from the Americans, particularly in the third period when Canada took four penalties, including two in the last 10 minutes. The game could have ended much earlier if not for the steadying play and presence of Desbiens.

The tournament came to a wildly dramatic finish after riding the waves of many emotional highs. Remember that many of these women play in the Professional Women’s Hockey Players Association (PWHPA) and in the National Women’s Hockey League (NWHL), so follow them and their teams between the World Championships and the Olympics so you’re ready when international play comes again.

Sports and music writer, covering the Ottawa Senators for The Hockey Writers. Lecturer at King’s University College. Loves a good day at the outdoor rink.