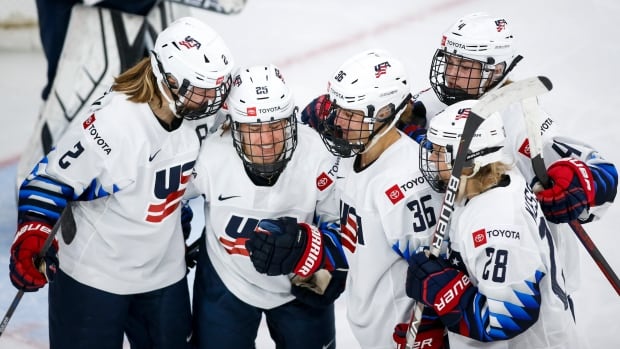 The United States is a win away from a sixth straight women’s world hockey championship.

Alex Carpenter, Abbey Murphy and Kendall Coyne Schofield, with an empty-net goal, scored for the U.S. in a 3-0 semifinal win Monday over Finland

The U.S. will face the winner of Monday’s later semifinal between Canada and Switzerland.

Abbey Murphy scored on a terrific individual effort as part of the United States’ 3-0 shutout victory over Finland in the semifinals of the IIHF women’s world championship in Calgary. 1:03

“This team is special,” Murphy said. “It’s been a heck of a road, but we’re here and we deserve it. It’s going to be a ton of fun.”

The U.S. has won eight of the last nine world titles. The Americans edged the host Finns 2-1 in a shootout in the 2019 final in Espoo.

The 2020 championship was cancelled because of COVID-19. This year’s tournament was rescheduled to August in Calgary when Nova Scotia called the championship off in May.

“This is what we have been working toward for the past two years now, to be able to get back to the gold-medal game and have an opportunity to win another gold medal,” U.S. defender Megan Keller said.

After falling 5-1 to Canada to conclude the preliminary round, the United States thumped Japan 10-2 in the quarter-finals.

The Finns, who will play for bronze Tuesday, got by the Czech Republic 1-0 in the quarter-finals.

With Keisala out of Finland’s net for an extra attacker, Coyne Schofield scored into the empty net at 17:08 of the third period.

Down two goals with just over seven minutes remaining in the game, Finland also pulled Keisala during a power-play for two extra attackers, but didn’t generate a goal from it.

“The key point is get the puck to the net. The U.S. was doing a really good job blocking every shot,” Finland captain Jenni Hiirikoski said. “We need to be a little smarter there to get those pucks to the net.”

Murphy drove in from the wing and tucked the puck under Keisala to score at 15:17 of the second. Carpenter re-directed a Lee Stecklein shot from the blue-line by Keisala at 10:55.

“The U.S. won the game in the second period,” Finland coach Pasi Mustonen said. “They were better there.

“This team needs time to play the second periods in the right way in order to be able to compete with the North Americans, but we are coming.”

Keisala held the Finns in the game, stopping all 15 shots she saw in the first period.

Her teammates didn’t get a shot on net during two minutes of a five-on-three early in the period, but generated a couple scoring chances later in the period.

“When get a five-on-three, we usually are extremely good. Nothing went right in that situation,” Mustonen said.

Susanna Tapani put the puck off the post with five minutes remaining. Elisa Holopainin shot her own rebound just wide of the far corner of the U.S. net during a power-play.

The Russian Olympic Committee (ROC) and Japan will play for fifth place Tuesday with a berth in Pool A in the next world championship at stake.