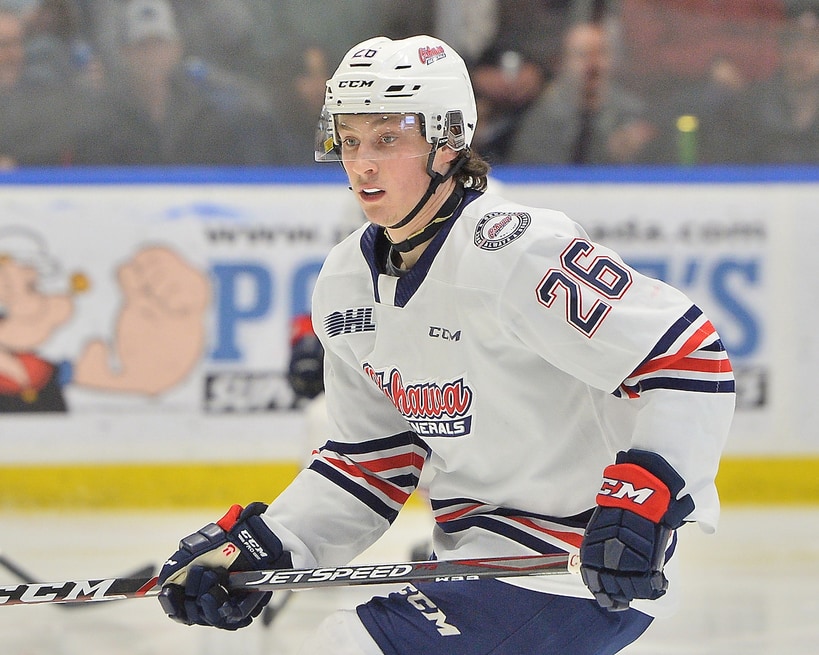 Writing about hockey during a long offseason can be hard to do. Luckily, that wasn’t the case this time. Due to the season starting late and ending late, along with the fact that commissioner Gary Bettman wants to start the 2021-22 season on time, we got only a few weeks of downtime. Most of the time has been filled with free-agent frenzy, the expansion draft, and the regular NHL Entry Draft. Now, we’re back in full swing of things with the Nashville Predators development camp ramping up. It was a week-long excursion bringing together most of the prospects in the team’s system. With the KHL preseason starting, Yaroslav Askarov, and the first selection in the first round of 2021 for the Predators, Fyodor Svechkov, couldn’t make the trip.

Even though that may be disappointing for some fans, the prospects there put on a show. Some of them are closer to making the NHL than others, but a good prospect showcase can elevate the status of some players in the minds of management and the scouting department.

I wrote an article about why Philip Tomasino would be a good addition to a Predators roster that is continuously getting younger, and development camp sealed the deal in my mind. He was clearly the best player there, and it’s been the same way against competition both his age and older. To give you a brief rundown of his accomplishments in the Ontario Hockey League (OHL) and American Hockey League (AHL) over the last two seasons, he scored 100 points in 62 games with the Niagara Ice Dogs and the Oshawa Generals. His season in the AHL with the Chicago Wolves was a success, scoring a team-leading 32 points in 29 games. His World Junior Championships were great too. He scored six points in seven games, including four goals. All of this points to the fact that he should be making the roster come opening night.

As for where he should be placed in the lineup, that’s a whole other topic. If I were coaching, I’d throw him into a middle-six role instantly. We saw it on the New York Rangers with Kaapo Kakko and Alexis Lafreniere; both didn’t succeed in their first seasons relative to their draft positions because they didn’t play a substantial amount of minutes. They were thrown into roles that weren’t suited for the grinder playstyle, and it was evident. Once they received good minutes with even better linemates, we saw a jump in their offensive production. Head coach John Hynes shouldn’t make the same mistake that now-former Rangers head coach David Quinn did and put Tomasino with players that can help him succeed. Playing on a line that features Cody Glass centring one of Mikael Granlund or Filip Forsberg on the wing would be an exciting project for the coaching staff to delve into.

We will all know more by the time training camp rolls around, and we get to see more of the chemistry between the NHL guys as well, but it would be beneficial for both parties if Tomasino got better minutes from the start. He’s clearly too good for the AHL, and his two-way game appears to be at an NHL level, so why not give it a shot?

Egor Afanasyev Is a Bull

If you’ve met Egor Afanasyev off the ice, you probably wouldn’t think he’s a hungry and aggressive hockey player. Sure enough, he is. His 6-foot-4 stature is enough to make you a bit more hesitant to go into the corners with him. Then, when you actually do it, you realize that he’s not easy to pry off the puck. His tenacity separates him from many prospects, and his skating for a player with his frame is truly impressive. Although he isn’t the fastest, he uses his strides effectively to play an excellent two-way game and create for both his team and himself. The best part about his defense is his forechecking. His wingspan allows him to cover a lot of ground, and it forces defenders to make passes that they otherwise wouldn’t.

Afansyev is somewhat of a genetic freak. He has the build for a fourth-line grinder that loves to put his dukes up with the best of them, but he has the skill set of a top-six winger with tons of potential. Arguably the best part about his game is the shot he possesses. With the Windsor Spitfires in the OHL, he scored over 30 goals in 2019-20. He was over a point per game as well, with 67 points in 62 games. In the winter of 2020-21, he was one of the best players in terms of points on the Russian World Junior team and scored an impressive five goals and six points in four games in the MHL – Russia’s junior hockey league. He did get 16 games of playing time in the Kontinental Hockey League (KHL), but he was given limited minutes and thrown into a depth role.

Unlike Tomasino, it’s doubtful that Afansyev makes the NHL roster for this upcoming season. However, depending on his output in lower-level leagues, he could make the team by 2022-23. There is no need to rush the young forward no matter how much the fans might want to see him in the gold and navy. Also, I think it would be beneficial for both him and Askarov to make the lineup simultaneously. They will be the first two big Russian names that the team drafted to make the lineup, now looking at their trajectory.

Gunnarwolfe Fontaine Is More Than Just a Cool Name

When the Predators selected Gunnarwolfe Fontaine 202nd overall in the 2020 NHL Draft, it wasn’t his play that stood out to fans. It was his name. Ever since that day, he has been marked into the “name Hall of Fame.” However, over the last two offseasons, he’s shown that he is more than that. Especially at this offseason’s development camp, he was all over the ice in practice and the future stars scrimmage. He pursued pucks with tons of speed and aggressiveness, and he found ways to cut through space to create time and open up other lanes for his teammates. It didn’t seem to matter who was on his team; he played his game.

He became the first star of the futures game because of his no-quit attitude and ability to pursue pucks in hard areas. He may not have been the most skilled on the ice, but he made up for it through his excellent work ethic. It’s the type of player that the Predators could certainly use on their roster. I highly doubt he gets elevated up past the third line if he makes the NHL roster one day. However, he could provide the same value as a Rem Pitlick or a Tanner Jeannot without blistering physicality.

David Farrance Should Get More Time in the NHL

Just like Tomasino, I wrote a big profile on David Farrance and why fans should get extremely excited to see him finally getting a shot in the lineup. He’s a high-tempo offensively inclined defenseman with excellent instincts on the rush and in the zone. On the man-advantage, he moves the puck gracefully and with a purpose, which is something that can certainly be utilized by a Predators team that has had a struggling powerplay for what seems like forever. The third pair lacks any killer instinct. With Roman Josi, Alexandre Carrier, Mattias Ekholm, and the newly acquired Philippe Myers taking up the first four spots, it appears as if that’s Farrance’s best shot. He may not get the most minutes, but it provides him enough shelter to let him do what he wants with the puck. With Matt Benning as his partner, the onus will be on him to create with the puck.

Farrance in the development camp practices and scrimmages showed exactly what I expected. He had some pretty incredible passes that require tons of skill to pull off. One that stuck with me and got a vocal reaction from the fans in attendance was a flip pass from the half wall in the defensive zone to a breaking forward who got a high-quality scoring chance.

One of the biggest traits that Farrance showcased was his patience. He consistently took the puck from high-danger areas in the defensive zone and moved to open space to settle the playdown. It’s an underrated part of his game, but the reason he’s able to find so many lanes with his excellent hockey instinct is because he understands that it requires patience. He was clearly one of the better players at the camp, and he put on a show in terms of offense. Of course, there is still stuff to work on in the defensive side of the game, but time in the NHL and possibly the AHL will aid that.

Zachary L’Heureux Stands by His Word

When Predators scout J-P Glaude interviewed with the media, he revealed what Zachary L’Heureux said to him when questioned whether or not the team should draft him.

“take anyone in the draft – if you put one puck in the corner, I’m going to get out with the puck. I’m going to win the battle.”

Zachary L’Heureux’s response to J-P Glaude when asked if the Predators should choose him in the NHL Entry Draft, July 24, 2021

He wasn’t lying. There were many times that I watched drills or pieces of the scrimmage where he went in with essentially no fear and took the puck away. He made it look effortless, and the grit he showed both ways in open ice was also extremely impressive. It’s not often that you trade up to draft a player like L’Heureux, but after watching him perform, I’m starting to understand why they did it. He’s going to take the puck from you, whether you’re Sidney Crosby or Patrick Maroon.

L’Heureaux showed more than tenacity in the corners. He showed excellent skill with the puck and was a menace in transition. It felt like his legs never stopped moving. Because he kept moving, he generated tons of chances for his team. In the drills that he participated in, it was more of the same. Both open ice drills and drills along the boards were a success for him. Sometimes, he put himself out of position because he was a little bit too aggressive in his puck pursuit. However, there’s a lot to love about what he showed in his first time against the other prospects. He established himself.

There was a lot to like from the Predators camp. From prospects showcasing their talents in smaller drills to being the best of their peers in the future stars scrimmage, there’s a reason why many scouts and prospect gurus have the pool moving up relative to other teams in the league. It’s only a matter of time before we see the roster injected with even more youth than there is right now.

Jeff is a consistent source for Predators and Red Wings content here at The Hockey Writers. He enjoys watching all sorts of hockey from juniors to the pros and playing for his high school and local teams in Nashville. He’s a big proponent of hockey analytics, and you’ll often see him using lots of statistics and data to back up his main talking points. You can find his work here, or check out his contributions on his own Substack, or at Last Word on Hockey and On the Forecheck. Lastly, you can listen to him on the Youth Movement Podcast presented by On the Forecheck or the Triple Shift Podcast. For any inquiries about interviews or questions about statistics, analytics, or just general hockey opinions you can message his Twitter, @jjmid04.