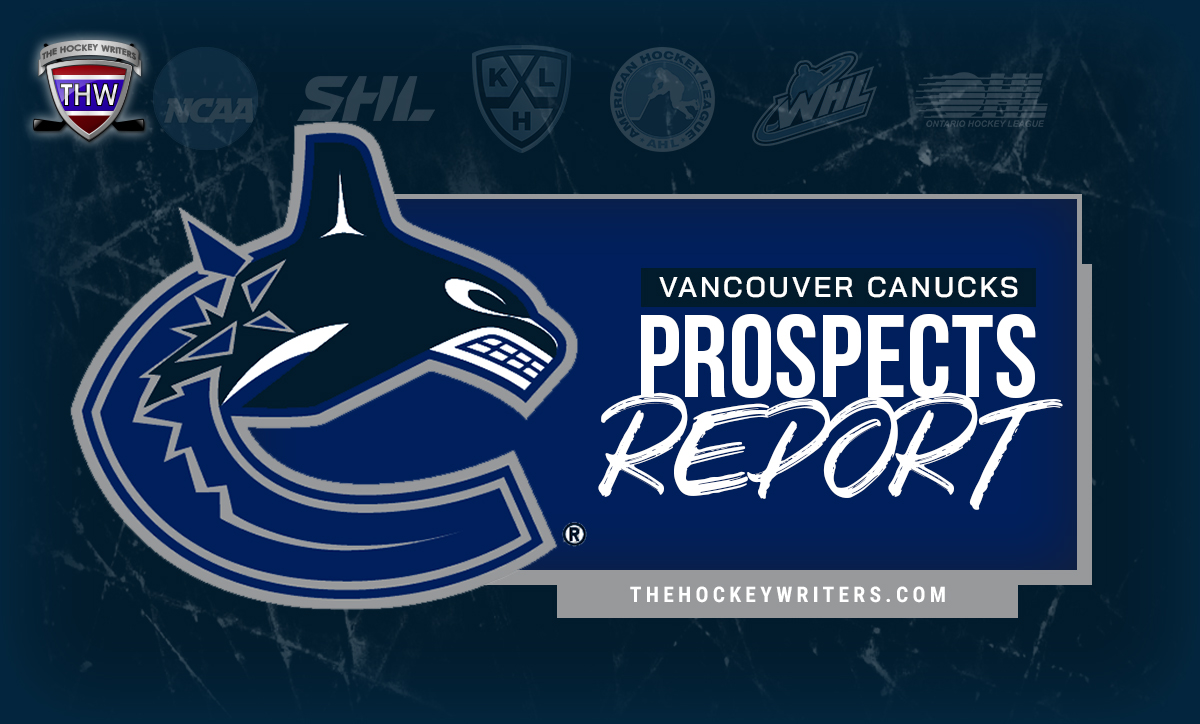 The last time I wrote a Vancouver Canucks prospects report, Jonah Gadjovich was just getting the call from the American Hockey League’s (AHL) Utica Comets, William Lockwood was on an insane run of goal scoring and Mikey DiPietro was just getting back into the crease after a long stint on the taxi squad. Now, here we are four months later and the Canucks have six new additions to their prospect pool from the 2021 NHL Draft and a brand new AHL team in the form of the Abbotsford Canucks. The excitement of training camp and the preseason is also only two and a half weeks away. Man, how time flies.

Highlights of this first edition of the prospects report include moving day for five prospects as Vasily Podkolzin, Danila Klimovich, and Viktor Persson make the trek overseas to continue their development in North America. The two Jacks, Jack Malone and Jackson Kunz also move from the United States Hockey League (USHL) to the NCAA as the former begins his sophomore campaign at Cornell University while the latter starts his freshman year at the University of North Dakota.

That and a whole lot more as we get you ready for a new season of recapping and analyzing the top performances of prospects throughout the Canucks pipeline.

Klimovich Ready To Compete For a Lineup Spot

The Vancouver Canucks will not only have Podkolzin to look forward to but also 2021 second-round pick Danila Klimovich as well. According to Canucks insider Rick Dhaliwal, the slick, hard-working Belarussian will indeed be coming over from the Kontinental Hockey League (KHL) to participate in training camp in a few weeks.

Sure, Klimovich is a long shot to make the Canucks’ opening night roster, but that doesn’t mean we shouldn’t be excited to watch him in training camp. He’s already shown tremendous skill and creativity playing against his peers during the U18 World Championship, so it should be interesting to see what he can do against tougher competition. With his motor and work ethic, I wouldn’t bet against him sticking around to the final roster cuts.

Where Klimovich will spend his 2021-22 season is still up in the air, as he could conceivably play in four different leagues. If he doesn’t make the NHL roster, he could be sent to the AHL’s version of the Canucks, the Quebec Major Junior League’s (QMJHL) Rouyn-Noranda Huskies, or back to the KHL where he’s already played in the preseason for Dynamo Minsk. It remains to be seen where the Canucks ultimately send him, but if I was general manager Jim Benning, I would try and keep him in North America where he will get a lot of ice time. As we’ve already discovered with Podkolzin, the KHL isn’t the best place to be developing prospects.

After over three months of waiting for paperwork and vaccinations, Podkolzin is finally in Vancouver. Stuck in Russia during the pandemic playing for the KHL’s SKA St. Petersburg, I’m sure he’s happy to be in North America and on the cusp of joining the Canucks. The fact that he and his agent didn’t include a KHL-out clause in his contract speaks volumes to where he wants to continue his hockey journey. In other words, he’s not leaving the confines of the Western Hemisphere any time soon.

That’s music to every Canucks fans’ ears, as they have been waiting over two years to watch this guy in the NHL. Podkolzin is probably the most NHL-ready prospect the Canucks have in their system, and he’s more than prepared to take his game to the next level. Possessing a maturity, motor, and competitive drive rarely seen in a young player, he could challenge for the Calder Trophy when all is said and done. Although, Cole Caufield and Trevor Zegras will probably have something to say about that too.

Projected to play in the top-nine and second-unit power play right out of training camp, Podkolzin won’t have the same expectations Elias Pettersson and Quinn Hughes had when they entered the league. He will be a complementary piece to the offence and potential x-factor throughout the season and potentially into the playoffs. Like his rookie cohorts before him, I think he’s going to surprise a lot of people this season.

Another player that was stuck overseas battling for ice time was 2020 seventh-round pick Viktor Persson. The Swedish defenceman was selected 56th overall by the Kamloops Blazers of the Western Hockey League (WHL) in the 2020 CHL Import Draft and has not stepped foot into North America yet. That’s about to change, as he’s expected to join the Blazers for the 2021-22 season when it begins on Oct. 2 against the Prince George Cougars.

We’ve had good discussions with Viktor and his representation and he’s committed to the organization. He was supposed to come over last season but couldn’t due to the pandemic…We believe he’ll be a good player. He likes to activate into the rush, likes to play an offensive game.  He also has a physical component. He’ll be an all-around two-way player for the team.

Persson was not given a lot of opportunities in the Swedish Hockey League (SHL) with Brynäs IF, as he only got into four games. In those games, he only got a grand total of 1:22 of ice time. He also bounced around two other leagues with Brynas IF’s J20 team and Stromsrbo IF of the HockeyEttan where he played 27 games and recorded six goals and 15 points.

With the Blazers, he will most certainly get more ice time. His mobility and two-way game should get him time on both the power play and penalty kill too. Canucks brass and fans alike will get to see him a lot as he will visit the Langley Events Center and the Save-On-Foods Memorial Arena six times. The first meetings against the Victoria Royals and Vancouver Giants will come on Oct. 12 and Oct. 23 respectively. He will also be in Canucks training camp with the rest of his fellow prospects in a few weeks too.

It’s always difficult to keep track of where all the prospects are playing especially after the offseason. Well, I’ve got you covered with the 2021-22 Canucks Prospect Tracker. Here is a list of all the prospects playing everywhere except for the AHL and NHL. As you may have already seen, the Abbotsford Canucks will be covered by the Canucks on the Farm column.

That does it for another edition of the Canucks prospects report. Stay tuned for more in the coming weeks as we count down the days to training camp and the start of the 2021-22 regular season!

Lifting the Stanley Cup was ‘everything I dreamed of and more,’ says Alex Newhook
Devils Have 9 RFA & UFA Decisions to Make This Offseason
Blue Jackets May Be Facing Most Important Draft in Franchise History
Flyers Free Agent Predictions for 2022 Offseason
Chicago is Calder City again