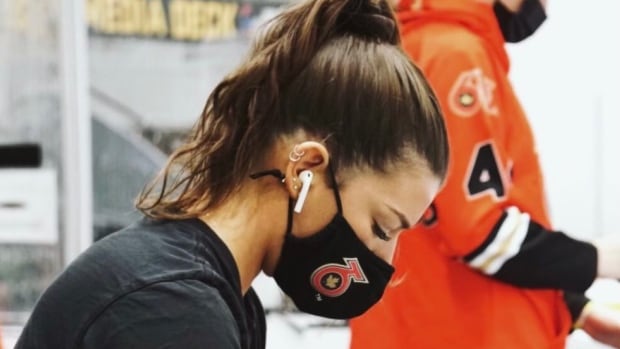 One year after becoming the first woman from P.E.I. to sign a contract with the National Women’s Hockey League — only to have the season cut short and the playoffs revamped because of COVID-19 — Stratford’s Sarah Steele is heading back to the Toronto Six for the 2021-22 season.

The 26-year-old defender signed another one-year contract with the team last week.

“I think it’s really special to be able to play a full season of hockey this upcoming year,” she said. “I think it’s going to look a lot different than it did last season.”

Instead of a regular season last winter, the six-team league set out on a two-week ”bubble” tournament in Lake Placid, N.Y., beginning in January. Excitement mounted as NBC announced it would televise the games.

Then two teams were forced to drop out when players tested positive for COVID-19.

The four remaining teams — with Toronto as the top seed — travelled to Boston to play for the Isobel Cup in late March. Toronto ended up losing in the semifinal and what began as a promising year ended in disappointment for Steele and her teammates.

“It was especially discouraging for our team, I think, just because we kind of had a full head of steam,” she said. “We were a huge contender to win it all.”

Steele will play pro hockey while taking an online class in hopes of some day working in the mental health sector. Last summer, she worked with the Alzheimer Society on P.E.I.

She’s not the only one in her family playing hockey at an elite level. Her brother, Ryan. plays NCAA Division 1 in Connecticut, where he was a finalist for the Hobey Baker Award last year.

Connecticut also has a team in the NWHL, and Steele said she’s hoping they can cheer each other on when the Six play there.

It’ll have special meaning for Steele, who played three years in Europe after her college career in Boston.

“I think it’s actually been like eight years since I’ve played an official game in Canada so I’m really excited for that to actually happen this season.”