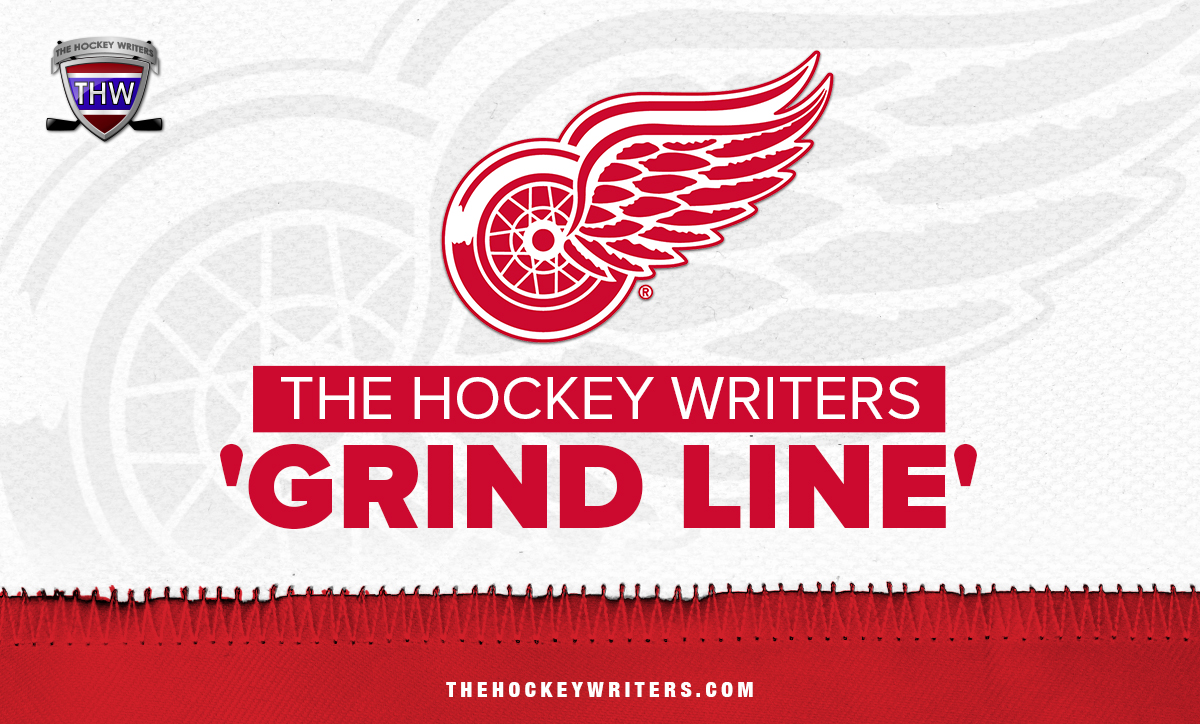 What’s The Grind Line? Apart from the once-famous line of Kris Draper, Kirk Maltby, and either Joe Kocur or Darren McCarty, The Grind Line is also The Hockey Writers’ weekly column about the Detroit Red Wings. This week Tony Wolak, Devin Little, Kyle Knopp, and Jeff Middleton are the muckers who make up THW’s forechecking unit and sound off on Red Wings topics.

With each new season comes a brand new batch of storylines for reporters and fans alike to follow. The Detroit Red Wings have had a lot to talk about since the turn of the calendar year. The team finished on a relative high note during the 2020-21 season, marked by improvement across the board. This offseason saw general manager Steve Yzerman shed more bodies from the Ken Holland era, and he brought in new blood to help push the youth movement forward. Hockeytown is buzzing, and there is a lot to talk about.

Which storyline intrigues our panel of writers the most? Check it out here, and be sure to share which ones you’ll be keeping an eye on in the comments section at the bottom of this page!

After coming over to the Red Wings from the Washington Capitals, Jakub Vrana posted eight goals and 11 points in 11 games – not too shabby for Anthony Mantha’s replacement. But how will Vrana fare over an 82-game season with the Red Wings?

It’s true he was a neglected talent in D.C., playing mostly third-line minutes on deep Capitals teams. Still Vrana was able to put up 24- and 25-goal seasons in 2018-19 and 2019-20, respectively. I’m curious to see how he handles a top-line role over the long term. Can he gel with Dylan Larkin and Filip Zadina to give the Red Wings a dangerous first line? Can he handle the pressure of being *the* go-to scoring threat?

This is a new role for Vrana; will he sink or swim? If it’s the latter, the Red Wings will be a much better team from an offensive standpoint this season.

Devin Little: Is Nedeljkovic the Answer in Goal?

A goaltender and their team’s success often go hand-in-hand. That being said, sometimes goalies are able to inflate the performance of their team – we just witnessed a Stanley Cup Final run by the Montreal Canadiens that was mostly led their stud goaltender Carey Price. Conversely, a mediocre goalie can be masked by a team with enough talent in front of them.

Coming into his first season with the Red Wings, 25-year-old goaltender Alex Nedeljkovic has just 29 games of NHL experience to his name. While he posted top-tier numbers with the Carolina Hurricanes last season, that Hurricanes team was supremely talented; it’s no coincidence that they kept winning regardless of whether “Ned”, James Reimer or Petr Mrazek was in the crease. Due to his lack of experience, Carolina was not willing to commit a ton of money to Nedeljkovic, and that led to the trade that sent him to Detroit.

The fact of the matter is that Nedeljkovic will have nowhere to hide this coming season. The Red Wings do not have the same quality of team that the Hurricanes did/do, and that should show early on as Ned gets acquainted with his new team. I’m not expecting him to announce himself as one of the top-tier goaltenders in the league next season, but I am excited to see whether or not he can prove that the 2020-21 season was no fluke. If all goes well, he should give the Red Wings solid goaltending more often than not. Even if the wins don’t come, his performance metrics (save percentage, quality-start percentage, etc.) should still show that he’s a starter-caliber goalie in the NHL.

By the end of the 2021-22 season, we should have a very good idea of whether or not Nedeljkovic is the real deal or not.

Yep, I’m jumping in to grab the low hanging fruit — an apple actually, one that will be turned into Seider…

Okay, all joking aside, I cannot wait for this kid to make his NHL debut. After a formidable season with the Grand Rapids Griffins, and his award-winning season in Sweden’s SHL, Seider’s next logical step is significant time with the Wings. This is his season to prove that he belongs at this level and is the backbone of the defensive core of the future.

Likely being paired alongside Danny DeKeyser or Nick Leddy will also allow ample opportunity for Seider to mature his leadership abilities. By now we have all seen the way Seider led his SHL teammates through adversity, so it will be fun to watch how that carries over throughout the course of the season.

We discussed potential alternate captains in our Grind Line column two weeks ago and I was the only one to give Seider a nod. If we have this same conversation next offseason, will that vote become unanimous?

I would go with Moritz Seider, but who wants to read the same regurgitated stuff? Kyle made some excellent points, so I’m not going to steal his thunder. Instead, I think combining both his and Tony’s points to make an ultimate one is the way to go. The biggest storyline to be looking out for this season is the team’s offense as a whole.

The Red Wings during their worst years have most notably been unable to score. Combine that with some pretty egregious team defense, and that makes for one of the worst teams in the entire NHL. However, with some of the upgrades they made over the offseason and even during the season, it’s very possible that they are able to get those goal numbers up and moving in the right direction. The aforementioned Vrana will be a key piece of the offense and producing strong rush chances by using his speed and agility with and without the puck. Seider creating chances from the backend along with support players like Filip Hronek, who was just signed to a deal on Sept. 3.

The fact is that a minus-216 goal differential over three seasons is unacceptable. At this stage of the rebuild, there is no excuse for not scoring goals. Obviously you shouldn’t be expecting playoff team-level scoring, but tangible improvement in that category is something that needs to happen.

Want more Red Wings content? Tune into The Hockey Writers’ Grind Line — a weekly show on YouTube and Facebook. We stream weekly on The Hockey Writers YouTube channel. Check out our most recent show below, and make sure you subscribe to the channel so you don’t miss any upcoming shows.

I am a Western Michigan University alum whose passion for hockey knows no limits. Dr. Pepper enthusiast. Catch me and my fellow Red Wings writers’ YouTube show “The Hockey Writers Grind Line” which drops every Saturday.