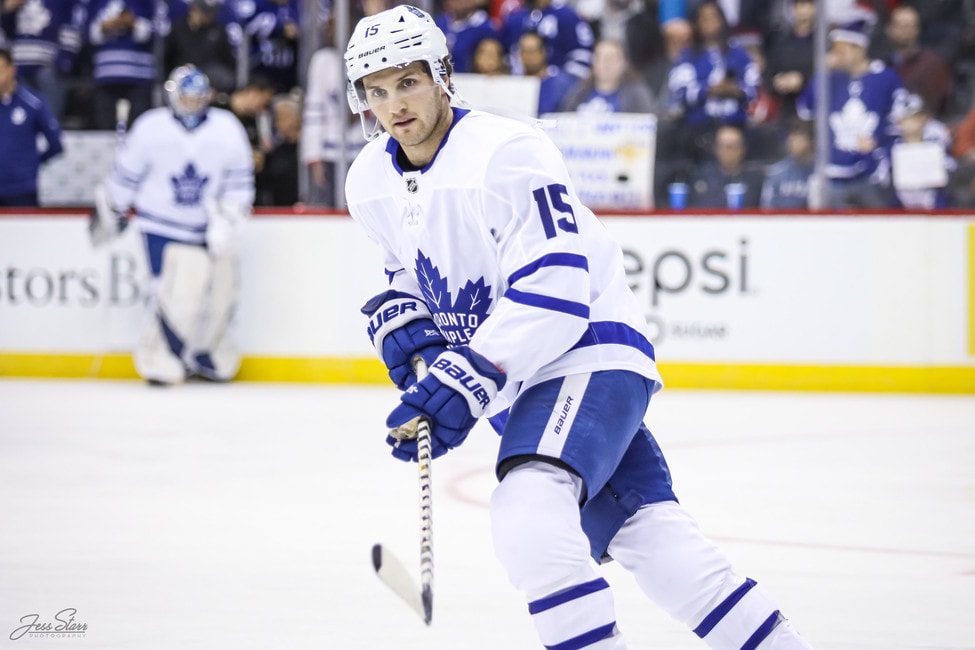 In recent articles we’ve discussed the Toronto Maple Leafs’ acquisitions of both Nick Ritchie and Michael Bunting. Specifically, we’ve suggested that the organization’s hope is that one of them might become a better-than-adequate replacement for the departed Zach Hyman.

As Maple Leafs’ fans know well, Hyman’s departure to the Edmonton Oilers leaves a gap on the left wing of the top line of Auston Matthews and Mitch Marner. Because Hyman had a unique (and great) skill set as a hockey player, replacing him one-for-one would be nearly impossible. However, there are different aspects of his game that could be – if not replaced – replicated, albeit a bit differently.

Both Top-Six Left-Wing Positions Need to Be Filled

Perhaps Maple Leafs’ general manager Kyle Dubas has done well by bringing in Ritchie and Bunting. Maple Leafs’ fans can hope. The best case scenario is that both players slot beautifully into one of the respective left-wing roles on the top two lines. Even an eternal optimist has to believe that’s unlikely to work perfectly.

However, if it doesn’t happen, the Maple Leafs also have options for a left-wing spot on either of the team’s two top lines other than Ritchie and Bunting. One option that has received some discussion is Alex Kerfoot. In fact, during a visit to TSN’s Overdrive in late July Kyle Dubas hinted that might be on his mind when he stated: “In signing David Kampf, it allows us to be more flexible. You could potentially put Kerfoot onto the wing as needed.”

The question we’ll engage in this post is whether Kerfoot might be a reasonable option to replace Hyman on the left-wing? Here’s what we know about Kerfoot. First, he’s a much different type of player than Hyman. Although Kerfoot’s reasonably good defensively, he’s neither as big nor as physical as Hyman.

The chart shows that Hyman has averaged five more goals and four more points per 82 games.

However, since he’s moved to Toronto from Colorado, Kerfoot has played in a much different role than he played with the Avalanche. And, that role might suggest why his scoring is down.

Was It Kerfoot’s Avalanche Limemates?

Obviously, things are contextual; however, can we find what might be an explanation for the difference?  If we look at Kerfoot’s most common line-mates for each team, we see the three most common forwards Kerfoot lined up with for the Avalanche were Tyson Jost (687 minutes), Colin Wilson (679 minutes), and J.T. Compher (628 minutes). With the Maple Leafs, his most common line-mates were Kasperi Kapanen (342 minutes), William Nylander (297 minutes), and Ilya Mikheyev (272 minutes).  If we compare his line-mates’ 82-game scoring pace while playing alongside Kerfoot, we see the following.

Was the Difference Kerfoot’s Zone Starts?

Looking at Kerfoot’s zone starts offers Maple Leafs’ fans one possible reason why Kerfoot seems to be less productive with the Maple Leafs than he was with the Avalanche. Assuming that starting in one’s own defensive zone is a disadvantage, Kerfoot was placed into more difficult assignments by the coaching staff.

Was the Difference Kerfoot’s Power-Play Usage?

As the chart shows, Kerfoot’s five-on-five production has actually been higher with the Maple Leafs than it was with the Avalanche. Comparing his play with both teams, the biggest difference in his overall production is that he played just over 1:30 more minutes of power-play time with the Avalanche.

Although it would be silly to say that Kerfoot’s the same type of player Hyman is, it would also ignore the evidence to suggest that he couldn’t become as productive offensively. It would just be in a different way.

Specifically, if Kerfoot were given more offensive opportunities and more power-play minutes, there’s a good chance his overall production could match and possibly even surpass Hyman’s.

By the way, Kerfoot’s playoff performance against the Montreal Canadiens also suggests how important he can be during the postseason. Given the total shutdown of the Maple Leafs’ first-line by the Canadiens, that Kerfoot scored a goal and five assists (for six points) is not insignificant.

Related: Was There a Chance Sidney Crosby Could Have Played in Toronto?

Such playoff production certainly doesn’t hurt an argument in favor of his being given more ice time with the top-six units.