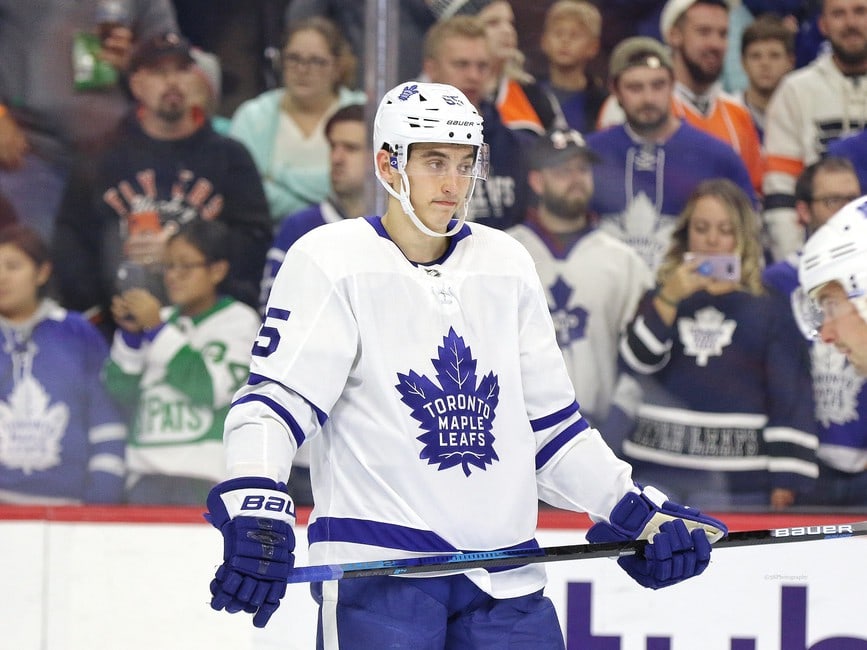 In today’s NHL rumors rundown, reports have surfaced that Ilya Mikheyev had requested a trade from the Toronto Maple Leafs, one the team isn’t willing to accommodate. Meanwhile, the Minnesota Wild are hiring Mikko Koivu in an executive role. Zach Parise is officially a member of the New York Islanders and there are updates on Jack Eichel trade talks, plus Elias Pettersson and Quinn Hughes contract negotiations. Finally, is Tyler Bozak headed to the Pittsburgh Penguins?

Mikheyev Wanted to be Traded by Maple Leafs

Elliotte Friedman reports that after the 2020-21 NHL season ended, Mikheyev requested a trade out of Toronto due to lack of ice time and role on the team. The NHL insider notes that the Leafs did/do not want to accommodate his request. There’s some backlash on social media following the news, many noting that Mikheyev had plenty of chances in the top nine and did nothing with them.

What’s interesting is that his situation or perspective might have changed based on the new look of the roster after players like Zach Hyman and Joe Thornton left the team and played the same position he did (left-wing). Friedman doesn’t note if Mikheyev asked only because he thought his future opportunities might be limited. Perhaps now, he realizes he’s got a chance to make the team if healthy and in a better mindset. The organization does consider Mikheyev a key part of their team and is “counting on him to have a big year”, says Friedman.

Canucks Talks With Pettersson and Hughes

As reported by Irfaan Gaffar the Canucks continue to have talks with Quinn Hughes and Elias Pettersson’s camp but as of the latest reports, there has not been much progress on new deals. The hope is to have them signed by the time training camp begins. He writes, “Hughes and Pettersson camps and the Canucks continue to go back and forth, but as of last report there is not too much going on. This is a process, and a negotiation, but the next weeks will be interesting.”

Friedman adds that he wonders if Pettersson is waiting to see where Kirill Kaprizov’s contract comes down in Minnesota.

Former Wild forward Zach Parise is now a confirmed member of the Islanders as he was speaking with the media on Friday about his deal. Parise said during his avail, “Without getting into too much detail, I thought I was (joining the Islanders) a couple of years ago at the deadline. Now it’s become real life and I’m excited about it.”

As for leaving Minnesota, he said he loved the team and the city. His family had just moved into a new house — which he called the kiss of death — and noted, “It kind of felt like the writing was on the wall. Parise said, “Just the way I was being used, it just felt like something was going to happen.

As reported by Michael Russo of The Athletic all signs point to former Wild Captain Mikko Koivu taking on a role within the Wild organization. Russo’s sources said Koivu will be around the Wild during next week’s prospect camp/showcase and training camp.

Koivu left the Wild briefly to try and continue his hockey career with the Columbus Blue Jackets. He suited up in only seven games during the 2020-21 season but has played the rest of his NHL career with the Wild organization.

Also as part of Friedman’s “quickie blog” this week, he reports the Sabres had an “introductory meeting” with Jack Eichel’s new representatives but, as of yet, the word is there’s no resolution. Friedman does note several teams picked back up interest in trading for the player after Labor Day.

Both sides are apparently trying to keep everything as quiet as possible, which means a deal could come out of left field.

Friedman also notes that the Penguins might be looking at free agent Tyler Bozak. He’s still making a decision on where to play this upcoming season and because of injuries to Sidney Crosby and Evgeni Malkin — both that could affect the start of the year — the team might look to acquire a center.