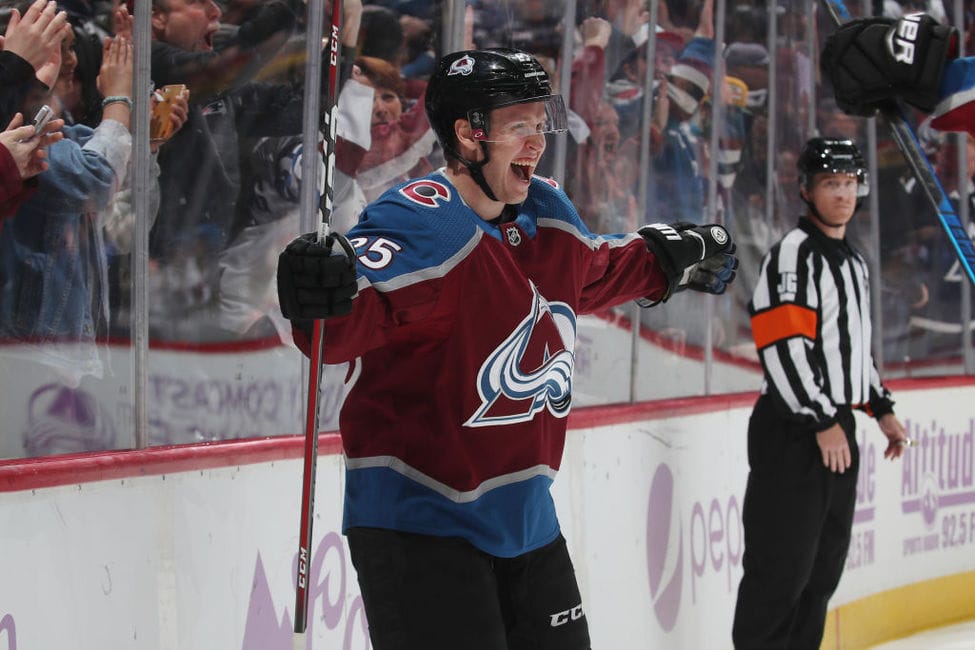 The task of projecting potential breakout candidates from teams within the NHL’s elite is always a much more arduous endeavor than having to sift through the scraps of the league’s metaphorical garbage bin. The basement-dwellers can offer the steady playing time and appetizing power play opportunities which often lead to increased production, things that perennial contenders with settled lineups, such as the Colorado Avalanche last season, cannot realistically promise with any certainty.

Unlike most of the league’s heavyweights however, the Avalanche were picked clean in the offseason, with NHL regulars in Pierre-Edouard Bellemare, Joonas Donskoi, Ryan Graves, and Brandon Saad departing for new opportunities elsewhere, leaving a bevy of alluring opportunities ripe for the taking. With that being said, there are three intriguing candidates raring to make the most of Colorado’s open auditions, and nestle into the nook of public consciousness.

Where do we start with Newhook? He toyed with the collegiate circuit as an 18-year-old, finishing seventh in the nation in scoring with 42 points for Boston College, and collected the Tim Taylor Award, an honour which is awarded annually to the NCAA’s most outstanding freshman. After an injury hobbled the majority of his sophomore season, Newhook signed an entry-level deal with the Avalanche, and made an immediate impact for their American Hockey League (AHL) affiliate, the Colorado Eagles, tallying nine points in eight games.

His rapid acclimatization to professional hockey garnered him a late call-up to the Avalanche, where he scored the first three points of his NHL career while playing just under 14 minutes a night beside Colorado’s more experienced middle-six forwards. Despite having his ice time significantly curtailed in the playoffs, as is common with wide-eyed freshmen still absorbing the intricacies of NHL competition, Newhook scored the first goal of his career against the St. Louis Blues to skewer the 2019 Stanley Cup Champions.

Take it with a grain of salt, but Newhook’s production in the AHL points to an engrossing talent poised to graduate to a full-time gig, with his 1.13 points per game in the minors ranking sixth among rookie skaters with at least five games played. It’s not much to go off of, but the promising early return indicates that Newhook has already outgrown the competition offered by the AHL.

Colorado’s depth in attack was battered with the departures of their sixth and seventh highest scorers from last season in Donskoi and Saad respectively, necessitating that their collective production be replaced internally. Although Newhook could potentially slot into a top-six role from the outset, it would benefit the Avalanche to continue sheltering him before promoting him to skate as a regular member of their legion of secondary scoring. While power play time on the top unit will be tough to come by, Newhook should be given the chance to flex his creative impetus while facilitating scoring chances for one or more of Andre Burakovsky, Nazem Kadri, or Samuel Girard on the auxiliary unit.

In any case, Newhook seamlessly integrates within Colorado’s style of play, with shot attempts off of the rush per 60 minutes the fourth highest rate on the team through his very brief stint to end off the regular season, according to Natural Stat Trick.

A quick contextual explanation for per 60 minute stats: They account for uneven playing time by standardizing production along a singular unit of measurement, and can highlight players who may thrive in expanded roles. That’s not to say every player will succeed with more minutes or against more difficult competition, but it’s a useful heuristic to scout for potential diamonds in the rough.

His speed and guile off of the rush only serves to add to the Avalanche’s overwhelming strength, with the reigning Presidents’ Trophy winners leading the league in shot and scoring chance generation last season. If anyone could step in and replace the offensive impact of the offseason émigrés, it’s Newhook.

As if the Avalanche needed another agile stalwart roaming the blueline. The combination of Byram’s draft pedigree and mouth-watering promise convinced general manager Joe Sakic that he could weather the loss of Conor Timmins, who was traded (banished) to the Arizona Coyotes for Darcy Kuemper in an attempt to resolve Colorado’s goaltending dilemma brought upon by Philip Grubauer’s abrupt departure. The initial drafting of Byram continued Sakic’s ardent quest to collect every notable marauding defensemen in the league, like a low-stakes version of Thanos.

Last season was a year of poignant lessons and frustration with inconsistent health, as a bizarre run of recurring injuries and a COVID-related absence limited Byram to appearing in only 19 of the Avalanche’s 56 regular season games. To make matters worse, his mature performances for Canada at the 2021 World Junior Ice Hockey Championships prior to the start of the NHL campaign only served to further frustrate fans and team executives, agonizingly aware of the immense talent shunted to the sidelines far too often last season.

Byram frequently demonstrated the offensive awareness that enticed the Avalanche to take him fourth overall in 2019 as he ended the tournament third in scoring among all defensemen, accruing five points in seven games on the way to a second successive appearance in the finals, failing to replicate Canada’s triumph in the 2020 edition.

When available for the Avalanche though, Byram has shown the potential to become the fourth member of Colorado’s quintessential quartet of quasi-rovers on the blueline, joining Girard, Cale Makar, and Devon Toews in the most forecheck-resistant defence core in the NHL.

Thanks to Corey Sznajder’s invaluable micro-stat tracking data, it’s possible to gauge just how effective Byram was in transitioning the puck up the ice and connecting with Colorado’s cadre of skilled forwards, even in a limited sample. Although he attempted the fewest zone exits per 60 minutes on the team, Byram ranked second only to Makar in how efficient he was in exiting the zone with possession. Colorado flies through the neutral zone with more vigour than a sugar-loaded toddler, a style which demands that their defensemen keep up.

He had less success with carrying the puck into enemy territory, but having a wealth of crafty forward options to dish the puck off to relieves most of that burden. Byram’s next step is to become more aggressively decisive in the neutral zone which will allow him to attack with speed and force teams to respect his tenacity, further opening up sumptuous opportunities for his teammates.

Micro-stats only tell part of the story, however, and wider context involving usage, the quality of one’s competition and teammates, and a comprehensive evaluation of a player’s toolbox is required before making unequivocal claims of a player’s ability. It is encouraging to see Byram grade out so well compared to his much older peers and with a stable partner willing to cover for any defensive misgivings, Byram could blossom into another sterling puck-transporter for the Avalanche.

Yes, you read that right. Logan O’Connor, he of 7 points in 43 career NHL games, is Colorado’s breakout candidate with the most to gain ahead of the 2021-22 season. The undrafted forward made good on whatever enticed the Avalanche to extend him a full contract offer, scoring a respectable 67 points in 104 AHL games across two seasons spent shuttling between the Avalanche and the Eagles.

Don’t let his unremarkable point totals fool you, there’s a versatile winger purring underneath the surface, screaming out for an extended look on a team that is perfectly suited for his tactical flexibility. With the franchise’s top-down emphasis on speed and tenacity in all three zones clearly a guiding factor in roster construction and drafting, O’Connor is an affordable, in-house candidate to stem the offseason haemorrhaging of Colorado’s offence.

Harkening back to Corey Sznajder’s tracking project, O’Connor’s strengths lie in his dogged determination on the forecheck, and the maniacal fervour with which he storms opposing goal creases. Over his first two NHL seasons, O’Connor has shown a particular affinity for the front of the net, creating the fourth most rebound chances per 60 minutes (1.65) among all NHL skaters with at least 300 minutes played at five on five. If that’s not impressive enough, the winger ranks 15th in individual scoring chances created over the same timeframe.

Not only does Sznajder’s data also illustrate that O’Connor paces the Avalanche in the rate at which he recovers dump-ins, but his efficiency in that department is the fifth best rate in the entire NHL. When he disrupts zone exit attempts and hems opponents in their own zone, the Avalanche’s swarm tactic leads to tormenting sequences of recycled chances.

His offensive impact extends beyond forechecking, as he posts intriguing results in the passing and shooting departments. O’Connor’s playmaking is an underrated aspect of his game, with the third-year pro completing just under 2.5 high-danger passes – those from behind the net or across the slot – per 60 minutes last season, second only behind Mikko Rantanen among Avalanche forwards. Since 2019, O’Connor has also scored the 72nd most goals per 60 minutes while potting chances at just under 10 percent of the time, not an unsustainable streak of finishing by any means.

Keeping in mind the earlier hesitation I expressed with micro-stat data across a small sample of games, O’Connor appears to posses the fearlessness and versatility that pairs well with the Avalanche’s murderers row of attacking options, and a breakout campaign would surprise me about as much as another first-round meltdown by the Maple Leafs. What, too soon?

Roster fluctuation over the course of an NHL season is inevitable, but whether the crisis is facilitated by injuries or a string of poor performances remains to be seen. In any case, the teams that are oriented towards immediate contention typically offer fewer opportunities for internal advancement and prospects often struggle to wrest meaningful playing time from entrenched veterans.

The Avalanche are in the unique position of being a legitimate contender who can advertise several job openings, and set less established players up for success by providing them with a strong support system. In Newhook, Byram, and O’Connor, Colorado can roll out a trifecta of ambitious tyros looking to cement their place in a competitive lineup, and 2021-22 is their coming out party.