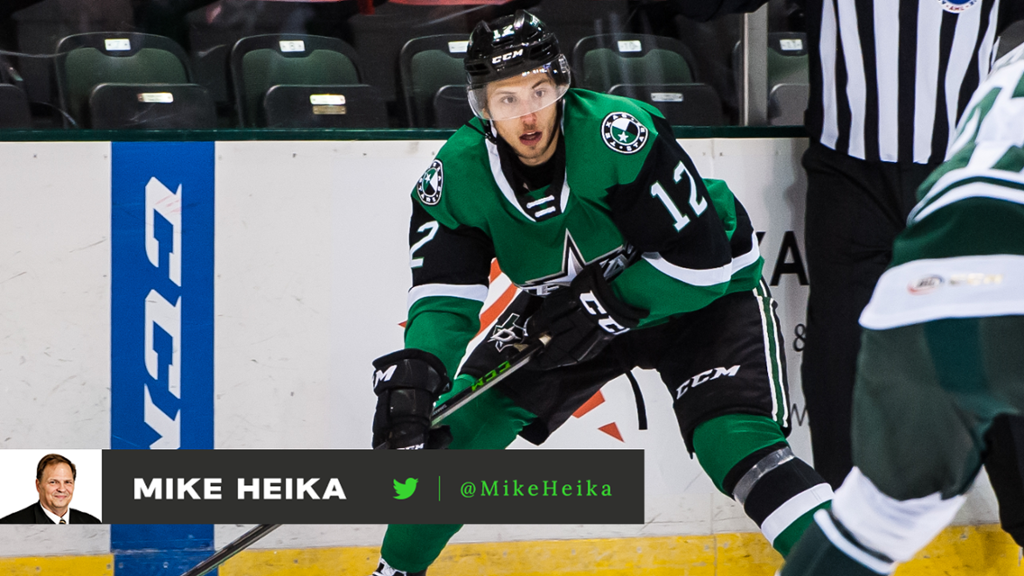 FRISCO, Texas — Making the jump from the AHL to the NHL is difficult for any player. Making it for a skilled forward might be the toughest job in the sport.

While a goalie, a defenseman or a checking line forward will get a similar assignment in trying to make the big team, a skilled forward could have to prove himself in limited minutes while playing a strange role just to gain the confidence of the organization.

The talented center, who earned rookie of the year in the AHL last season playing for the Texas Stars, already is being tried at right wing in development camp this week. What’s more, the powerplay specialist likely will get more penalty kill time to maybe show the parent club his versatility.

“We know what Damer can bring,” said Texas Stars coach Neil Graham, who is running development camp. “I coached him all last year. He did an incredible job as our first line center, but it’s about being versatile and giving yourself the best opportunity at the next level.”

Graham said Damiani will likely get some time at right wing in Traverse City, Michigan this week when the young Stars play against prospects from four other NHL teams. “If you can play multiple positions, if you can play multiple areas of special teams, if you’re good at faceoffs, it’s all about trying to find ways to add minutes,” Graham said. “So, for me, the more areas you can help the big club in, the better opportunity you have at sticking or getting a call-up and being a permanent fixture.”

Damiani said he’s on board. Drafted in the fifth round in 2018, the Mississauga, Ontario native had a great first season at the pro level, tallying 36 points (11 goals, 25 assists) in 36 games with Dallas’ top affiliate in the AHL. If Damiani is back as a top six forward in the AHL this season, he’ll try to build on a run of great offensive performances. He had 78 points (28 goals, 50 assists) in 61 games for Kitchener in 2019-20 and tallied 85 points (30 goals, 55 assists) in 58 games for the Rangers the year before.

Still, he understands that getting to the NHL requires a different kind of impact. He said Stars development gurus Rich Peverley and J.J. McQueen talked to him in the summer to prepare him for the possible changes he could face this week.

“J.J. and Pevs let me know that if you’re going to break through, it’s probably going to be on the wing first,” Damiani said. “You have to work to get to the middle of the ice at the next level, so I just have to play my game. I just have to try to find a role at the next level. I think can play in any role they want me to. I can adjust my game any which way. Whether it’s bottom six role or top six forward, power play, penalty kill, I think I can adjust to anything that they’re looking for. I just have to figure out that role and go from there.”

Graham said Damiani is a smart player with a lot of skill, so he’s going to try to help him find that role. While Damiani didn’t kill a lot of penalties last season, it was because Graham needed to save his top center’s energy for more offensive endeavors. This year, he’ll likely be used in a variety of roles.

“We talked to him in the summer about adding some right wing to his arsenal, and I think this tournament is a perfect time to try that,” Graham said. “It doesn’t mean he’s going to play right wing all tournament, but I think it’s a chance to figure some things out and grow through some mistakes in that area. He’s so smart. He could have penalty killed for us all year in Texas, but we needed him to produce every night, so it was more about managing his workload more than anything.”

Damiani is listed at 5-10, 170, so he’s not a big player, but he competes hard, and he welcomes the battles against the boards that he might encounter on the wing.

“Just the wall play,” Damiani said when asked what his biggest challenge might be. “I’m not a big guy, but I’ve been working on it. I knew there was a chance I’d be on the wing here, so I prepared for it and I’m ready for it, and I’m looking forward to it.”

Damiani is wearing No. 13, the same number his dad Rino wore, and said it was a nice moment for his dad and his mom Jennifer. He said he didn’t ask for the number, so he appreciates the fate that decided he should wear it. That said, the determined prospect doesn’t leave a lot to chance, so he seems in pretty good control of his destiny.

“He’s just got a knack for playing smart,” said Scott White, who serves as general manager of the Texas Stars. “He’s not a big man, but he’s smart, he has tenacity, vision and he anticipates plays well. He works hard, and I expect him to do the same thing this year. I expect him to just keep working and improving. I know he wants it, so we’ll see how it goes.”

The 2021 NHL Prospect Tournament in Traverse City begins on Thursday, Sept. 16. All games will be streamed live on DetroitRedWings.com.

Victory Club memberships are available now for 2021-22! Beyond season tickets, don’t miss your chance to secure the best seats for Stars home games, plus exclusive benefits, members-only experiences and much more. Click here to learn more!

This story was not subject to the approval of the National Hockey League or Dallas Stars Hockey Club.

Mike Heika is a Senior Staff Writer for DallasStars.com and has covered the Stars since 1994. Follow him on Twitter @MikeHeika, and listen to his podcast.