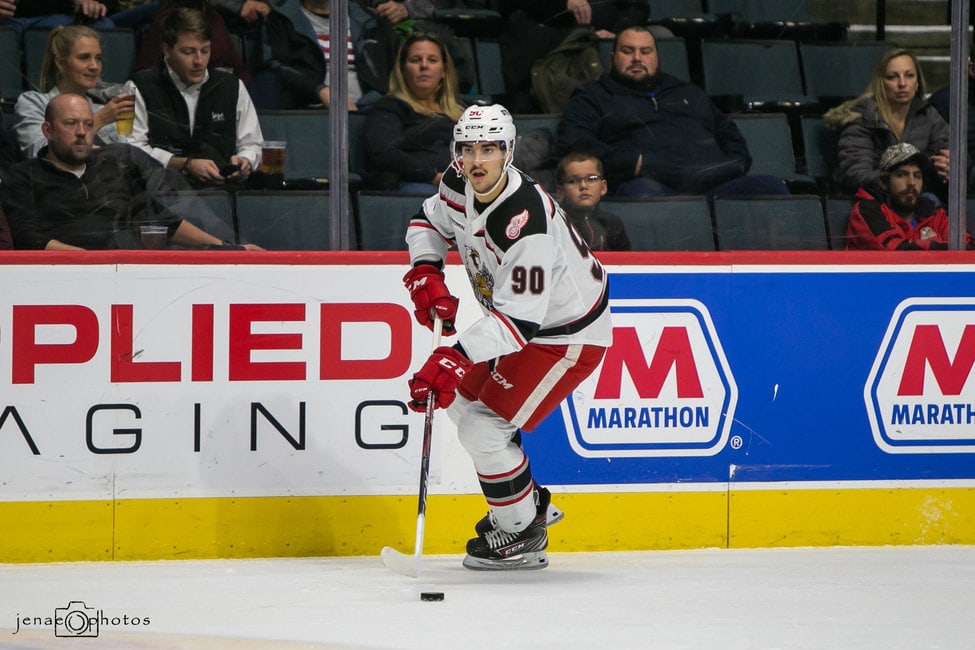 You can almost hear it: the sounds of blades scraping against a sheet of ice, snow flying off the edge of the blade like snow-blowers across the state of Michigan in January. That familiar smell of a hockey rink pours over you and embraces you like a long lost friend. It’s been a long offseason, and it’s been even longer since we’ve turned our eyes up north to Traverse City, Michigan, home of the annual Prospects Tournament hosted by the Detroit Red Wings.

Due to the pandemic, the event was not held prior to last season, so you have to go all the way back to 2019 to find the last time the Red Wings’ prospects took the ice at Centre Ice Arena in Traverse City. That tournament’s team was highlighted by four first round picks: Michael Rasmussen (2017), Filip Zadina (2018), Joe Veleno (2018) and Moritz Seider (2019). While this year’s team won’t have as many first rounders wearing the winged wheel (the roster features three, including the aforementioned Veleno), there are still plenty of players that not only have high upside, but have a chance to really put their names on the map going forward.

Here are just three of them:

Veleno may not be the oldest player slated to play for the Red Wings in this tournament, but he is the player that seems closest to the NHL (he appeared in five games with Detroit towards the end of last season.) The 30th pick of the 2018 draft should not only be the Red Wings’ top player in this year’s tournament, but there’s a fair argument to be made that he should be the top player among any team in this year’s group. After gaining “exceptional status”, allowing him to play in the Quebec Major Junior Hockey League (QMJHL) as a 15-year-old, Veleno knows a thing or two about dealing with outside pressure to perform.

Veleno spent the 2019-20 season with the Grand Rapids Griffins of the American Hockey League (AHL). There, he posted 23 points in 54 games in a season where he started slow, but gained some traction down the stretch as he adapted to life at the professional level. Last season, he spent the majority of the season in the Swedish Hockey League (SHL) where he posted 20 points in 46 games while playing for one of the weaker teams in the league. He finished out the year in Grand Rapids where he posted three points in four games.

As already stated, Veleno should have a very good shot at making the Red Wings’ opening night roster. He looked solid in his five-game audition, which included his first ever NHL goal. With that in mind, everybody watching him should expect that he stands out as one of the best players on the ice on a regular basis. If he has long stretches of being invisible, that does not bode well for his NHL chances to start this season. Performing well in this year’s Prospects Tournament won’t earn him a job outright, but a bad performance could seal his fate before training camp even gets started.

Though the Red Wings selected him 36th overall in 2018, Jared McIsaac was still just the fourth player the Red Wings drafted during that event. Let’s get a quick status report of the players selected before him:

Meanwhile, when you’re talking about the Red Wings’ best prospects, you usually have to go down the list a bit before anybody starts talking about McIsaac. So what gives? Well, when you’ve played just 46 games of note since the beginning of the 2019-20 season due to injuries, your stock is going to take a hit.

That being said, McIsaac has a real opportunity in front of him. As it stands, the Red Wings’ roster for this tournament is a little light on the blue line. With Seider sitting this one out, and many of Detroit’s top defensive prospects already doing their thing over in Europe, McIsaac stands out as potentially filling the role of the Red Wings’ top defenseman in this tournament, with Donovan Sebrango being the only other player that could get consideration for the role.

This means that not only will McIsaac play a big role for Detroit, but he’ll be playing big minutes in the process. The onus is on him not only to look good while playing in those minutes, but to also avoid getting injured and dispel the notion that he might have lost a step or two because of his injury history. He’s a long shot to make the Red Wings’ roster this season, but a solid performance in this tournament could put his name back on the map as one of Detroit’s top defensive prospects.

Drafted with the 160th pick of the 2018 draft, 24-year-old Victor Brattström has been looming in the background while fans were opining about the Red Wings’ lack of a “goalie of the future”. He posted a 18-12-7 record, a 2.20 goals-against average and a .903 save-percentage this season over in Finland in the months and weeks before Detroit moved up in the first round of the 2021 draft to select goaltender Sebastian Cossa with the 15th pick. It seems that people have kind of forgotten about the 6-foot-5 Swede.

Well, the plan for this season is that Brattström is going to join the Griffins in the AHL and battle with Calvin Pickard and Kaden Fulcher for playing time. A strong showing in this year’s Prospects Tournament should allow him to get a running start on his North American career as he aims to make sure that fans and pundits alike never forget about him again.

How much he’ll play in the tournament is anyone’s guess at this point. Surely the club will want to get a look at Cossa at some point, and Jan Bednar (107th overall, 2020) isn’t there just to sample Michigan’s lake life. It stands to reason that Brattström will get some time in the crease, with The Athletic‘s Max Bultman suggesting that maybe he’ll carry the bulk of the load due to his pending debut at the AHL level (From “Red Wings Traverse City prospect tournament: 5 prospect storylines to watch”, The Athletic, 9/14/21). Whether he plays a ton or not, this year’s tournament could offer hope that the future of the crease in Detroit is not entirely dependent on the development of Cossa. A good look for Brattström would be good not only for the Red Wings, but for the Griffins as well.

Due to restrictions brought on by the pandemic, this year’s tournament will not be as serious as years prior. There are fewer teams participating, and that means fewer games will be played. The stakes are as low as they have ever been, with Red Wings Director of Player Development Shawn Horcoff mentioning that it’s less of a tournament this year and more of a showcase (From “Previewing the Red Wings Prospect Tournament, 2021 draft pick early impressions: Shawn Horcoff Q&A”, The Athletic, 9/9/21).

That doesn’t mean that there isn’t still a lot on the line in Traverse City. Jobs can still be won and lost. Careers can be resurrected. The organization can still get a good look at some of its top young players. While there may be nothing more than bragging rights on the line, expect the Red Wings to come out with something prove as the tournament begins tomorrow because, well, a lot of the players out on the ice do have something to prove.

I am a Western Michigan University alum whose passion for hockey knows no limits. Dr. Pepper enthusiast. Catch me and my fellow Red Wings writers’ YouTube show “The Hockey Writers Grind Line” which drops every Saturday.

Grading Buffalo Sabres’ First-Round Picks in the Pegula Era
‘I would have done the same thing:’ Bowness OK with being Jets’ second choice
Calgary Flames: Revisiting the Jarome Iginla Trade
Lightning trade McDonagh to Predators in move to clear cap space
Dave Feschuk: Mike Grier is the NHL’s first Black GM, but not his family’s