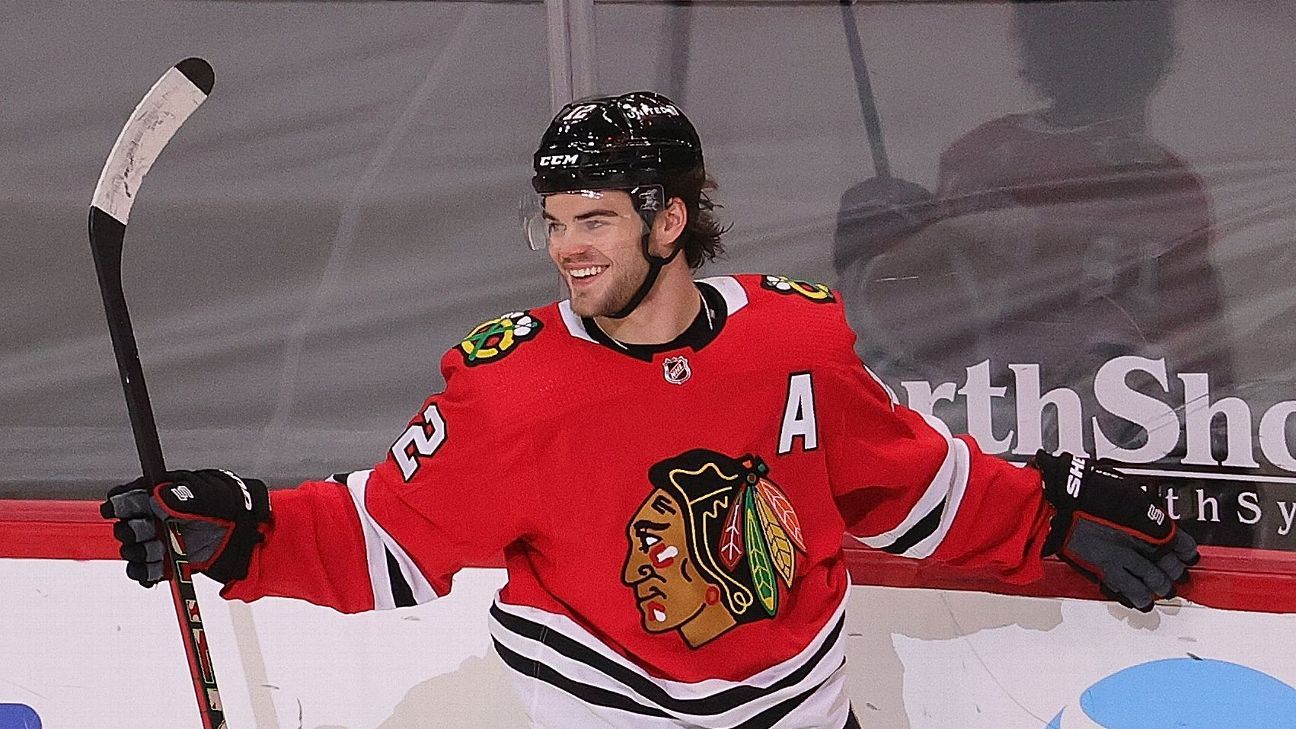 Last season was the strangest I’ve ever navigated in fantasy hockey.

On the one hand, there was the predictability of the league’s temporary realignment, as teams would face only opponents within their own divisions. Pick a weak division, reap the rewards — half of the league’s top scorers were preying on the North Division, for example. But that was counterbalanced by a 56-game sprint of a season and the utter unpredictability of the COVID pandemic on the NHL: from unexpected absences in games to the unexpected impact on otherwise consistent players.

This season — fingers crossed! — appears to bring a return to some semblance of normalcy, at least in fantasy land. So it’s with some confidence that I choose to plant my flag with these 10 players for the 2021-22 season, searching them out in my fantasy leagues based on how I expect they’ll perform this season. Some of it is historical. Some of it is contextual. Some of it is a hunch.

Nathan MacKinnon, C, Colorado Avalanche There are obvious reasons MacKinnon should be the primary target on your draft board. No NHL player has taken more shots on goal over the past three seasons than the Avalanche star: 889, or 58 more shots than the puck-spraying Alex Ovechkin. His 2.51 points per 60 minutes at 5-on-5 was tied for 14th in that span, and he was 11th in power-play production in that span. Barring injury, he’s as sure a thing as they come. But I especially like him in 2021-22 because of the way last season ended. You could smell the bile bubbling up inside of MacKinnon after the Vegas Golden Knights dispatched the Avalanche in six games, winning four straight. He’s going to take it out on someone this season, and that someone will be wearing goalie equipment in the opposing crease.

Aleksander Barkov, C, Florida Panthers As a team, the Panthers were fourth in expected goals last season, and there’s little reason to believe they won’t continue to trend up offensively under Joel Quenneville. Barkov is likely to gain offseason trade coup Sam Reinhart on his wing, with Carter Verhaeghe returning on the left side. His point pace last season would have put him around his career high of 96 points set in 2018-19. The better fantasy news is that his shots on goal per 60 minutes crested into double digits (10.1) for the first time in his career. Another 30-goal and 90-point campaign is in the cards for the pride of the Panthers.

Alex DeBrincat, LW, Chicago Blackhawks The stink cloud from DeBrincat’s 2019-20 regression — 18 goals and an 8.7 shooting percentage — might still obscure what an offensive dynamo the guy has been in the seasons that surrounded that campaign. He scored 41 goals in 2018-19; last season, he had 32 goals in 52 games. There’s still room for improvement here in shot generation and power-play points, and the latter could be helped by the addition of Seth Jones and the return of Jonathan Toews. As long as he’s lining up across from Patrick Kane, he’s going to be a fantasy boon.

Nikolaj Ehlers, RW, Winnipeg Jets The Jets winger hit another level last season and there’s no turning back. He had 46 points in 47 games, with only 13 of them coming on the power play. It marked the third time in four seasons that his shots per 60 minutes hit double digits (11.2). He’s a plus-19 over the past two seasons, if that sort of thing factors into your scoring. Part of this flag-planting is my hope that Pierre-Luc Dubois finds his stride after last season’s awkwardness and helps Ehlers hit an even higher level.

Conor Garland, F, Vancouver Canucks I mentioned this in my piece on 2021-22 breakout candidates, but Garland has a chance to be the next J.T. Miller for the Canucks. Please recall how Miller, a productive player in stops with the Rangers and Lightning, blossomed with Vancouver when placed on the wing of Elias Pettersson. Garland could eventually end up there too, but it’s expected he’ll line up with Bo Horvat initially, which is not a bad place to be either. His best offensive season was in 2019-20, when he scored 22 goals in 68 games. He had a 66-point pace last season on a lousy offensive team in Arizona. I bet he lingers deep into some drafts this season. Perhaps not next season.

Postgame analysis and highlight show airing each night throughout the season from Barry Melrose and Linda Cohn. Watch on ESPN+

Darnell Nurse, D, Edmonton Oilers The trick with the Edmonton Oilers and fantasy hockey? Drafting the beneficiaries from Connor McDavid and Leon Draisaitl, with the knowledge that those two players could be gone within the first two picks. Defenseman Tyson Barrie is an obvious one, as his 48 points in 56 games during his first season in Edmonton led all defensemen last season. Nurse was 12th in scoring (36 points), mainly because he didn’t generate the power-play points that Barrie did — and frankly never has in six full seasons in Edmonton. But his shot generation is better than Barrie’s and he’s not the defensive liability that his teammate is notorious for being, skating to a plus-27 last season. Depending on how your league is scored, he ticks a bunch of other ancillary fantasy boxes too such as hits, blocked shots and penalty minutes.

John Klingberg, D, Dallas Stars Miro Heiskanen might have market corrected Klingberg on the ice, but the 29-year-old Swede still has him beaten in the fantasy realm among Dallas defensemen. Klingberg has been a steady offensive player for Dallas, ranging between 1.5 and 1.8 points per 60 minutes over the past three seasons. He’s had exactly 15 power-play assists in each of the past three seasons, which is consistent to the point of superstition. But I especially like Klingberg here for one reason: the final year of his contract. I’m fond of drafting “signing for their supper” players in their walk years. Considering how much offensive defensemen are getting on the UFA market — and by that I mean Dougie Hamilton has twice the cap hit of Klingberg at the moment — he’s going to want to capitalize.

Mark Giordano, D, Seattle Kraken I want to have at least one Kraken on my team for the sheer novelty of it. The problem is the uncertainty. Who will Jordan Eberle and Jaden Schwartz flank on the wing? How much will Vince Dunn — a fantasy dark horse darling in some leagues this season — be given to do? The “Jonathan Marchessault” of the Kraken won’t reveal himself until the games begin. And while I like Philip Grubauer and Chris Driedger, I’m not sure how much I like the team in front of them. So I’ll go with one of the most known quantities on the expansion team in Giordano. The perception is that his production has fallen off, but the reality is that it regressed to the mean after his Norris-winning 2018-19 season. You can pencil him in for around 40 points and over 200 shots. He’ll get power-play reps. He’ll collect his PIMs as a top-pairing defenseman. He turns 38 the week before the season starts, but I think he’s still good for another productive campaign — especially if the Kraken essentially “pump and dump” a veteran in the last year of his contract ahead of the trade deadline.

More people play on ESPN than anywhere else. Join or create a league in the No. 1 Fantasy Football game! Sign up for free >>

Ilya Sorokin, G, New York Islanders It’s not exactly a feat of fantasy daring to draft a goalie on a Barry Trotz team, as the Islanders have the lowest goals-against average in the NHL over the past three seasons (2.46). It’s the reason Semyon Varlamov will be drafted in the top five or six goalies in your league. But my eyes are on Sorokin. He earned around 40% of the starts in his rookie year and posted impressive numbers (.918 save percentage, 2.17 goals-against average, 3 shutouts). I think that split creeps higher in favor of Sorokin in his second season for an Islanders team whose success is one of the more predictable things in an otherwise unpredictable division.

Calvin Petersen, G, Los Angeles Kings The Kings all but handed the crease to Petersen, 26, last season. He started 57% of their games and posted decent numbers (.911 save percentage, 2.89 GAA) for a team that finished with a .438 points percentage. I think the Kings circle back up the standings this season, and Petersen will benefit from a better team in front of him. (Although if you’re in a league where saves are important to scoring, hopefully not too much better as the Kings gave up the ninth-most shots per game last season at 31.2.) Los Angeles is expected to hand Petersen a vote-of-confidence contract before the season. That’s enough for me to plant my flag on thee.