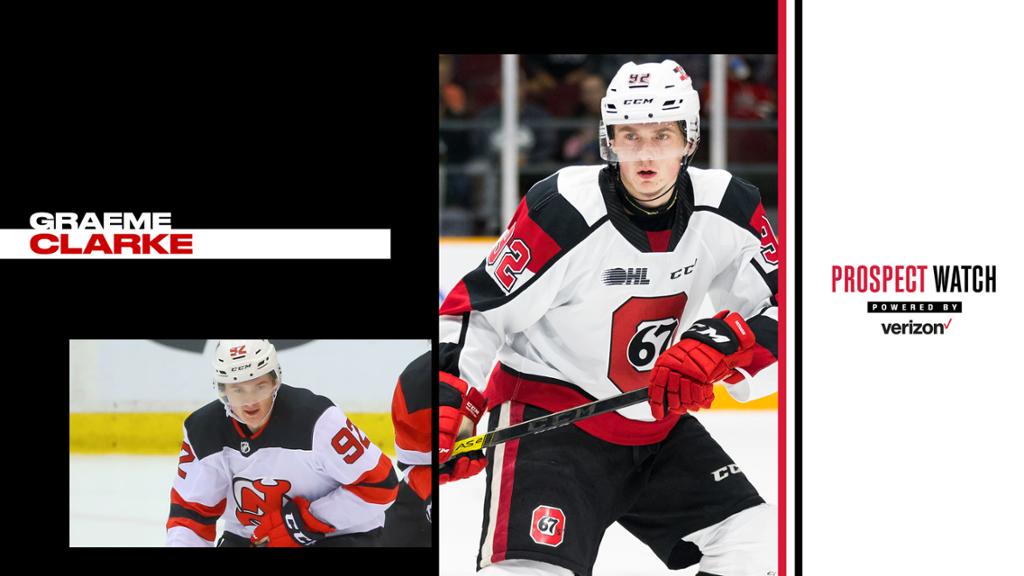 When Graeme Clarke prepared for the 2020-21 season, he expected to be back in the Ontario Hockey League once again. However, with the OHL cancelling the season due to the COVID-19 pandemic, Clarke shifted his plans and ended up getting his first year of professional hockey under his belt.

The right wing started the year in Slovakia with his younger brother, Brandt, while the duo were on loan to HC Nove Zamky. After six games, Graeme returned to North America and played 31 games with the Binghamton Devils of the American Hockey League. During his first full season representing the Devils franchise, Clarke scored eight goals and had 10 assists for 18 points in his rookie campaign. Although the year did not go the way he anticipated, the Devils 80th-overall pick in 2019 was happy with how things worked out.

“I think it almost worked out for the best,” Clarke said about playing in the AHL. “I really got my feet wet, first pro season, and got good ice time and I was able to run with that. It was fun.

“(My) all-around game really helped. Pro (hockey) is a lot different than junior. Junior you can get away with a lot more but in pro, if you make a mistake guys are going to put the puck in the back of your net and then you’re sitting on the bench. So I think that was a big learning curve, but by the end of the year, I think it really helped me a lot with my development.”

Clarke learned plenty of lessons from that first season, including what you can and can’t get away with in professional hockey. Another key difference was playing against older, stronger, veteran players in the AHL compared to his own age group in the OHL.

“They so much more mature in their body, their mind, the way they use their stick, feet, everything, is just to another level,” Clarke said. “To adjust to that, figure out the challenges with that … it’s a big adjustment but it’s still hockey and once you figure it out, everything kind of works out.”

‘Figuring it out’ in professional hockey can be harder than it seems. Clarke learned all about building confidence especially around scoring after a rut to start his season in the AHL.

“I think my first four games, I had zero points. That’s never fun, I was definitely in a little bit of a rut,” Clarke explained. “Talk about confidence, you just flip the switch. I was able to score in my fifth game and then went on a four-game point streak. I think that’s another thing about pro. Sometimes it can get streaky, especially as a young player. So that was just learning to manage the highs and lows in my first year, cause it was really unexpected to play the full season with them.”

Clarke used all the lessons he learned throughout the season to drive his offseason training both on and off the ice. In addition to working with his trainer in Ottawa, the forward had resources from the Devils to improve. As a result, Clarke spent the summer growing and gaining confidence as he looks to make a Devils roster spot out of camp this fall.

“Getting faster, stronger, to be able to try to make the team out of camp this year,” Clarke said. “Continuing to work on fast feet, quick feet stuff. Being able to get around defenders and then just building my body a little more. I’m still a young guy so just to put on a little muscle will help.

“I definitely think I had a good season, I left some things on the table that I really wanted to go into the offseason to improve and I think I really did. I’m coming in really confident this year.”