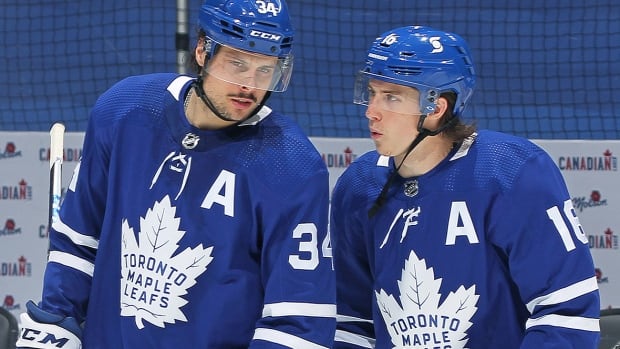 Unless, that is, the topic’s something other than his Maple Leafs.

Toronto’s star centre made waves in July when television cameras caught him and now-former teammate Joe Thornton in Justin Bieber’s entourage at UFC 264.

The Canadian pop icon —  a die-hard fan of the blue and white who’s become friends with Matthews in recent years — invited the players to visit Las Vegas for one of his shows as well as the mixed-martial arts card headlined by Connor McGregor and Dustin Poirier.

“We were just like, ‘Let’s make a little trip of it, and maybe we’ll just watch the fights and do the whole Vegas thing,”‘ Matthews recalled at the recent NHL/NHLPA media tour. “It was an incredible experience.”

Following the fisticuffs, Matthews and Thornton turned even more heads when they appeared in an Instagram story that included Bieber posted by model Kendall Jenner to her 190 million followers as the group hit the road at the end of the night.

“We went out to eat after,” Matthews continued with a grin. “How everybody was getting back to the hotel was in this big sprinter van.

“Just hopped in with everybody else, and off we go.”

But pivot the conversation to the Leafs’ latest playoff failure — a stunning first-round collapse in May against the Montreal Canadiens — and the tone is much different.

“It’s pretty self-explanatory,” Matthews replied when asked if that post-season setback hurt more than the previous four he’d endured with Toronto, a team still in search of its first series victory in the NHL’s salary cap era.

“It’s learning from what happened,” he added. “There’s nothing that we can change now.”

Habs advance to 2nd round with Game 7 victory over Leafs

Montreal eliminates Toronto with 3-1 win, faces Winnipeg in the 2nd round of the Stanley Cup playoffs. 1:08

The rear-view mirror is something both Matthews and Mitch Marner, the Leafs’ other key offensive catalyst, are doing their best to ignore in hockey’s biggest media market.

But questions about what’s already transpired, and what’s potentially to come for a team sitting under a microscope more intense than usual, will continue until the on-ice narrative changes.

“The past is the past,” Marner said. “There’s nothing we can do now.”

Led by their dynamic 24-year-old forwards, the Leafs open training camp Wednesday with the knowledge things need to be different, finally, this time around.

“The pressure is definitely on,” Marner added. “But we can’t let that get in our mind, we’ve got to realize that we are a great team, and that we do hold ourselves up to a high accountability.”

Toronto seemed to be making real, tangible gains during last season’s pandemic-shortened schedule. The Leafs topped the Canadian-based North Division, a circuit necessitated by COVID-19 border restrictions, with improved team defence and a commitment to structure.

Matthews led the NHL with an eye-popping 41 goals in just 52 games — he missed four with a nagging wrist injury that eventually required surgery last month — to capture his first Maurice (Rocket) Richard Trophy, while Marner was fourth in league scoring.

Toronto added leadership and grit with Thornton and Wayne Simmonds, while a leaky blue-line appeared to find its stride with the signings of T.J. Brodie and Zach Bogosian.

The Leafs were 18 points clear of Montreal in the standings and, despite losing captain John Tavares to injury, led the series 3-1 only see the Canadiens get off the mat with back-to-back overtime victories before Toronto laid a Game 7 egg at home.

“You can analyze and nitpick every little detail,” said Zach Hyman, who left the Leafs for the Edmonton Oilers in free agency this summer. “But if you play those three games over 100 times, I don’t know if they sweep us three in a row that many times.”

Matthews, who’s hoping his wrist will be healed by opening night on Oct. 13 against Montreal, kept up his end of the bargain in the playoffs, but Marner became a frustrated fan base’s lightning rod for criticism as his inability to score in the post-season reached 18 straight contests.

“Block out the outside noise,” Marner said of the key for his team as it returns to an ultra-competitive Atlantic Division. “Make sure that we’re not letting that outside noise and that doubt get into our mindset.”

“Sometimes change is good,” Matthews said. “Sometimes you bring in new guys, and maybe we’re missing something or maybe they just mesh differently.”

Like their team’s core of stars, head coach Sheldon Keefe, general manager Kyle Dubas and even president Brendan Shanahan are facing intense pressure to have Toronto break through and realize at least some of its potential.

But both Matthews and Marner skated around questions about whether or not it feels like this group’s last dance.

“I don’t want to look too far ahead,” Marner added.

‘I believe in this group’

Dubas has shown faith in Matthews, Marner, Tavares and William Nylander — the four high-priced forwards chew up nearly half the team’s salary cap — throughout his tenure.

That fact was reiterated once again in July.

“I believe that we’re going to see the best version of this group [in 2021-22] that we’ve seen yet, and I’m willing to bet everything on them.”

“Getting rid of the ego part and really buying into the team,” Matthews said. “The best teams, you just set aside your personal pride … and it’s all about whatever it takes. That’s not to say that we don’t have that.

Another part of it, surely, is trying to stay in the moment – a difficult task perhaps bordering on impossible in a city scarred by recent disappointment and 54 years without a Stanley Cup.

“You can get caught up pretty easily looking at the past or the future and trying to think of where your team should be,” Marner said. “It’s just trying to push each other to be better.

“Should be exciting times ahead.”

If there aren’t, more, even tougher questions are sure to follow.