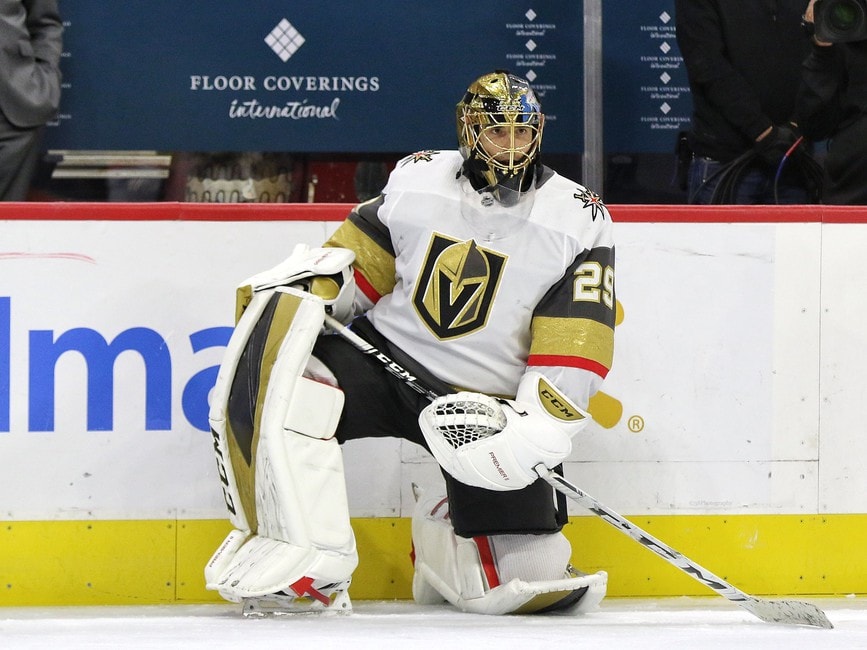 The time on the grandfather clock is starting to tick for Marc-Andre Fleury. In a recent recording of Sportsnet’s 31 Thoughts: The Podcast, with insiders Elliotte Friedman and Jeff Marek, Fleury considered the upcoming 2021-22 season with the Chicago Blackhawks, his 18th in the National Hockey League, as his potential final year stopping pucks in the crease.

Fleury has shown no signs of slowing down as a determined veteran netminder with a bucket load of prestigious milestones and accolades. After securing arguably his best career numbers with a 1.98 goals-against average (GAA) and .928 save percentage (SV%) in 36 games, the 36-year-old goaltender lifted the Vegas Golden Knights on his shoulders against offensive juggernauts during the postseason, just like he has done before.

Fleury ultimately shut down the likes of rookie sensation Kirill Kaprizov and the Minnesota Wild, and the top-six prowess of the Colorado Avalanche spearheaded by Nathan MacKinnon, but when it came to the surprise underdog Montreal Canadiens, Vegas’ offense vanished out of thin air, despite Fleury’s dominant display at home and at the Bell Centre.

In the end, Fleury’s 2.04 GAA in 16 games was the second lowest of his postseason performances, reducing his career playoff totals to 2.53 GAA and a .912 SV% in 162 games. Furthermore, he hasn’t missed the playoffs for the last 15 seasons. His playoff pedigree is one to not be dealt with lightly.

The Flower Moves to The Windy City

With the COVID-19 pandemic resulting in a frozen cap situation around the league, Golden Knights general manager Kelly McCrimmon made a surprise trade on July 28, trading Fleury to the Blackhawks for forward Mikael Hakkarainen.

Fleury admitted to the initial shock of the move, which brought up discussions with his family about their future outside of hockey because the three-time Stanley Cup champion saw Vegas as a place to hang up the pads and settle down.

“I’ve been lucky to do what I love for so long and my family was very comfortable in Vegas with the schools, the kids, their friends, our house. You start to think about retiring there and stuff. That’s why it was big news.”

The trade presents Fleury with a familiar challenge. When Vegas selected him as a prized piece in the 2017 NHL Expansion Draft, he didn’t have the depth that most experienced playoff teams contend with. In his first season with the newly minted 31st team in the league, Fleury carried the torch for a band of misfits that nearly amassed the Stanley Cup.

The Blackhawks are a team with a defined roster of core leaders and up-and-coming talent. Patrick Kane and Jonathan Toews, who is expected to be ready for the season after recovering from chronic immune response syndrome, are the bona fide vocal figureheads in the locker room. The young guys in Alex DeBrincat, Kirby Dach and Dominik Kubalik are bound for positive top-six minutes.

Sure, Chicago hasn’t made the playoffs in four years, but their offseason aside from Fleury was quite productive in shifting their tide from rebuilder to challenger. With a new No. 1 blue line chip in Seth Jones and an established veteran presence in Tyler Johnson, Fleury has in front of him the ingredients of a recipe that can create some noise when March and April roll in.

It won’t be easy, but a chance at staging in the big dance relies on how Fleury fares against the stacked Central Division. Based on how he handled the Wild and the Avalanche last postseason, there is a good chance he can rise to the occasion in what might be his last dance.

Michael Gutnick is a recent sports journalism graduate from the Walter Cronkite School of Journalism and Mass Communication at Arizona State University. Michael has covered professional and collegiate hockey over the last four years.