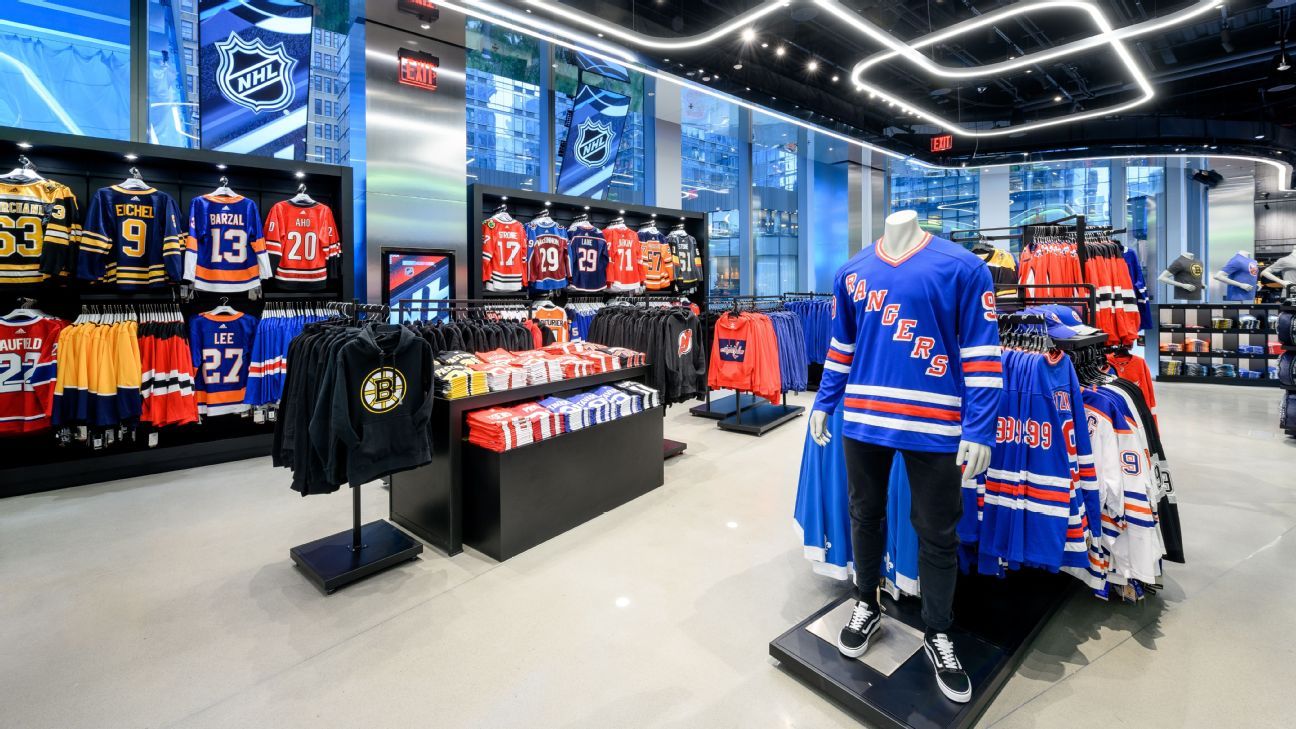 NEW YORK — Getting a photo with an NHL star would be on the short list of life goals for many hockey fans. At the league’s new retail space at One Manhattan West, that dream can become a reality.

Well, an augmented reality, at least.

When the NHL moved its corporate headquarters from 47th and Sixth avenues in midtown Manhattan to One Manhattan West, its flagship store went along with it. Reopening on Oct. 1, the NHL Shop is a 9,000-square-foot space located two blocks from Madison Square Garden. The two-floor store is like nothing the NHL has created before.

One innovation was borrowed from the NFL’s Dallas Cowboys. In 2019, they introduced a “pose with the pros” feature at AT&T Stadium. Fans stood in front of a video screen, selected five players from a menu, then watched as those players entered the frame and “posed” for a photo with them. Fans then received a digital copy of the image.

“We had seen it when the Cowboys did it and became social media darlings,” Brian Jennings, the NHL’s chief brand officer, told ESPN this week.

The NHL’s version of “pose with the pros” will feature players who were filmed in front of green screens during the players media tour in Chicago last week. The plan is to capture more current players as the season progresses, and incorporate some former players into the mix as well.

The screen is one of 29 high-definition video walls in the store that will show everything from live games to live tweets and Instagram posts from shoppers.

“Themed is dated. You do something that’s themed, and it’s immediately dated. But experiential is timeless. That’s what I love about the store,” Jennings said. “We live in an age where the younger generation expects a personalized experience, so a lot of customization went into it.”

The store will feature the expected assortment of merchandise, with jerseys, hats and trinkets from all 32 NHL teams, with an emphasis on the local clubs. It will feature new items such as clothing from WEAR by Erin Andrews and figures by Funko later this year. But it’s the technology and other innovations that separate this store from the original retail space in midtown. Among the highlights are:

Ice rink: Manhattan West has a two-acre public plaza located next to the store, and the NHL intends to place a 60-foot by 80-foot ice rink on it during the winter months, reminiscent of the rink in Manhattan’s Bryant Park. It can be viewed from the second story of the store. The rink will offer outdoor public skating and NHL-hosted events.

“It’s only 60-by-80 and it doesn’t have the glass. We’re not going to be able to have a proper hockey game, but if a team wants to come in and have a skating clinic, we can do that,” Jennings said.

Customization: Like the previous retail store and most NHL arenas, the new NHL Shop will have the ability to create customized jerseys on demand, with heat-pressed numbers and nameplates.

“But jerseys are expensive. I’m not going to sit here and say that’s an opening price-point item,” Jennings said. “So the ability to get a name and number T-shirt or a personalized hat, it just makes it more accessible.”

This is where the NHL Shop has taken customization to another level. Buy a hat, or bring in a team hat of your own, and for a fee, the shop can add a player’s signature, jersey number or even a captain’s “C” to the chapeau. For example, a Montreal Canadiens toque could have Carey Price‘s autograph and number added to it, or a Pittsburgh Penguins hat could have Sidney Crosby‘s signature added to the side.

For years, fans would debate which players were worthy of being featured on officially licensed name and number T-shirts. That debate is moot at the NHL Store: Walk in, pick out a blank shirt and you can get any team logo, and player’s name and number printed on it.

“One of the biggest challenges we have is that with manufacturers, there are these minimum orders that we have of 288 pieces of something, and sometimes you have that player on a second or third line that might be a fan favorite but they may not be able to have the popularity to necessitate a size range,” Jennings said. “With these kits, it opens up our ability to promote our players.”

Whether it’s an unexpected breakout player, a recent trade acquisition or an emergency goaltender, the store can create an official T-shirt that features any of them in an instant.

Hockey Hall of Fame: Hockey history is on display in the new store, with replicas of Original Six jerseys “frozen” in plastic as one ascends to the second floor. But Jennings didn’t want to turn the place into a museum. “Our history is important to us. But we didn’t want to make the store feel dated or too nostalgic,” he said.

There was a risk of that in allowing the Hockey Hall of Fame to carve out a place on the second floor, but Jennings said the plan is to make those display cases something vibrant, with rotating collections throughout the year, essentially a teaser for what’s on display at the Hall in Toronto.

The first installation will showcase the evolution of the hockey stick and helmet, the history of the NHL All-Star Game, and celebrate hockey in the Winter Olympics.

Goalie mask art: The store will feature a display of custom goalie masks created by the art form’s most notable names, including David Arrigo and David Gunnarsson. While some of the masks are themed to NHL teams — including a striking one in honor of the expansion Seattle Kraken — others are inspired by New York City itself. That includes one mask that features iconography from the Rangers, Islanders and Devils all together. The intention is to occasionally auction off the masks, and to have the artists come into the store to create pieces in the future.

There’s a soft opening of NHL Shop this week, ahead of the Oct. 1 official opening. The skating rink is expected to be open to the public in November.