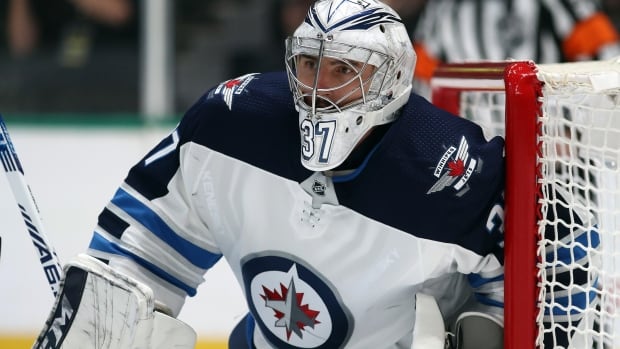 All Winnipeg Jets players are now vaccinated against COVID-19, including the one between the pipes, who revealed his own brush with the illness on Thursday.

Team captain Blake Wheeler said during a news conference the team is 100 per cent vaccinated, and goaltender Connor Hellebuyck also disclosed details of his recent experience with the coronavirus.

The illness caused by the virus was scary, he said.

“I stayed as mobile as I could and I got in a sauna, and that helped a lot. And then it took, I don’t know, about a week, week and a half … for the fog to fade, and I … started feeling like myself again.”

Hellebuyck got sick in late August, at which point he was unvaccinated. Due to the fast-approaching season, and league rules, he got vaccinated as soon as he recovered earlier this month.

Hellebuyck said he wished he could’ve had more time to get over symptoms first.

“I’m not anti-vax by any means, but I’d like to have that decision for myself,” he said.

“It felt very forced on me. And, you know, just where I am with my health, I had just gotten COVID and gotten over it, and then I had to get the vaccine, which made me feel like I had COVID all over again.”

It’s unclear based on the timelines provided by Hellebuyck which vaccine he received.

A minimum of 28 days is recommended between the two required doses for the mRNA-based vaccines, including those from Pfizer-BioNTech and Moderna. The Johnson & Johnson vaccine requires only one shot.

Asked which shot he received, Hellebuyck declined to say.

“That’s personal,” he said. “I am fully vaccinated.”

Though the league and NHL Players’ Association have not imposed a vaccine mandate on players, the NHL intends to crack down on those who are unvaccinated.

Teams will have the ability to suspend unvaccinated players without pay if they get COVID-19. Those who are vaccinated and test positive will sit out, with pay.

NHL deputy commissioner Bill Daly said this month he estimates about 98 per cent of players will be vaccinated by the time the season begins Oct. 12.

Some of the coming restrictions motivated Hellebuyck to get immunized immediately after recovering.

“It is what they have to do, and you know, I know they’re trying to make it best for everyone,” said Hellebuyck, but added “it would have been nice to have that option.”

“My body is healthy and I am ready to go.”