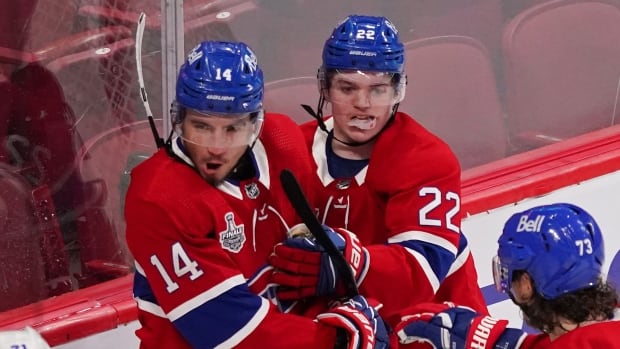 Then things changed, if only a little. But it certainly meant more than Suzuki could have ever imagined.

The Quebec government lifted some of its COVID-19 restrictions — among them a province-wide curfew — in late May, allowing the Canadiens to welcome 2,500 fans into the Bell Centre for Game 6 of their first-round series against the Toronto Maple Leafs.

“I felt unbelievable,” Suzuki said of playing in front of just 12 per cent capacity. “The energy that they created for us was amazing.

“I don’t know how we played without them, to be honest.”

It was a long winter and spring of 2021 for NHL players and fans in Canada. While arenas in the U.S. gradually opened as coronavirus vaccine rates ramped up, venues stayed almost entirely shut north of the border thanks to a slower rollout and more stringent regulations.

Montreal beat Toronto in overtime in that first NHL game in Canada with paying fans since March 2020, and after winning Game 7 on the road two nights later to complete the comeback from a 3-1 series deficit, would again suit up in front of 2,500 supporters twice in the Canadiens’ equally surprising second-round sweep of the Winnipeg Jets.

Attendance was boosted to 3,500 fans for both the third round against the Vegas Golden Knights and the Stanley Cup final with the Tampa Bay Lightning, who downed Montreal in five games for their second straight title.

“I kind of felt numb because we didn’t have fans for such a long period,” Suzuki said looking back on that first night when faces returned to the crowd. “I was like, ‘Maybe it’s the same.’

“Then all of a sudden we had them back … it changes the whole atmosphere.”

What could Canada’s Olympic men’s hockey team look like in Beijing?

Canadian NHL teams are set for fans to return this season as the league resumes an 82-game schedule and its regular division setup.

The seven franchises only played against each other until the semifinals last season because of border restrictions, meaning blaring music and artificial noise took the place of 20,000 voices inside arenas.

“Definitely excited to have the fans back in the building,” Calgary Flames winger Andrew Mangipane said.

“And not hearing the fake crowd noise.”

Leafs-Habs exhibition at 50 per cent capacity

Toronto welcomes Montreal to Scotiabank Arena in exhibition play Saturday — Maple Leaf Sports and Entertainment announced Friday capacity will be 50 per cent after Ontario loosened restrictions — for the venue’s first event with paying customers since March 10, 2020.

“Oh my God, we missed it so much,” Toronto winger William Nylander said. “You know how much the team loves the fans, what the fans mean to us, and what we mean to the fans.

“It’ll be so nice to have them back.”

The Leafs and Ottawa Senators hope to host capacity crowds for their regular-season openers, while the Jets also expect to play in front of full houses this season.

The Flames and Edmonton Oilers are currently allowed to fill their arenas despite Alberta being under a state of public health emergency due to a COVID-19 surge.

The Vancouver Canucks are limited to 50 per cent capacity, but the team has said it hopes restrictions will be eased. Montreal is permitted to play in front of 33 per cent capacity as things stand.

Each NHL rink in Canada will require proof of vaccination for fans to attend, save for Edmonton’s Rogers Place, which is also accepting a negative COVID-19 test.

‘Hardest year of my entire career’

Players were asked repeatedly before the pandemic-shortened season how they would deal with the empty buildings. Most put on a brave face and talked about being professionals with the ability to self-motivate, but it was more difficult than expected in a jam-packed season with little downtime.

“[Picture] a Monday night [in Vancouver], and no fans and you’re tired,” Canadiens winger Tyler Toffoli said. “You know that you have to fly six hours after the game. You’re just dreading that. You need that extra little motivation … it was definitely tough.

“Mentally, it was the hardest year of my entire career.”

Canucks goalie Thatcher Demko said some NHLers might have taken what the boisterous crowds bring for granted before the pandemic.

“It put a lot of perspective in the minds of the players as far as what the fans mean to the game,” he said.

Winnipeg centre Mark Scheifele found the lack of crowd-influenced momentum swings noticeable both at home and on the road.

“A big save or a blocked shot or a big goal … there’s only a goal horn,” he said. “You don’t get the full appreciation.”

“It can be a little hit on the boards and people are going nuts,” Oilers defenceman Darnell Nurse added. “You don’t know how much you miss it until you don’t have fans.”

Jets head coach Paul Maurice said the situation even impacted the people standing behind the bench.

“We were truly segregated,” he said of last season. “And what did we learn? We learned that we need our fans to enjoy our job — we truly do.

“I didn’t enjoy parts of my job that I always used to love, and that’s games. I love going to the rink. And there’s nobody in the building and you’re going kind of like, ‘What are we doing? This is no fun.’

Winnipeg centre Pierre-Luc Dubois does his best to ignore the crowd, but noticed a difference as last season ground on.

“That’s definitely something I missed.”

He finally got to experience it again at the Bell Centre during the playoffs.

“I was in the penalty box and the fans are chanting my name to mock me,” Dubois recalled. “But little did they know, I had a smile on my face.

And that was just the start.