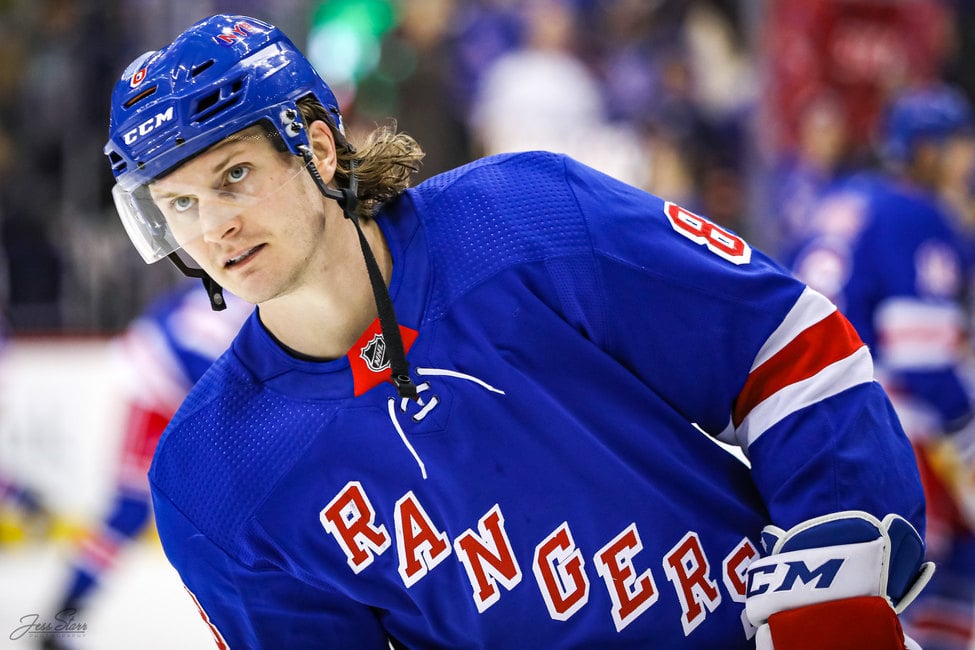 The New York Rangers are loaded with talented young defensemen this season, including Norris Trophy winner Adam Fox. The team also got strong play from Ryan Lindgren and K’Andre Miller last season, and skilled prospects Zac Jones and Nils Lundkvist will have a shot at making the opening day lineup this season. However, veteran Jacob Trouba will still be a key player, and the Rangers need him to stay healthy and thrive in a shutdown role.

Trouba’s Play With the Rangers

The Rangers acquired Trouba from the Winnipeg Jets during the 2019 offseason and then signed him to a seven-year, $56 million contract. He was coming off the best season of his career, as he finished 2018-19 with eight goals and 42 assists while playing in all 82 games for the Jets.

Expectations were high for Trouba, but he got off to a slow start in his first season in New York as then-head coach David Quinn struggled to find a good defense partner for him. Though he was a physical presence and strong on the penalty kill, he had an inconsistent season with too many giveaways.

Trouba finished the season with seven goals and 20 assists in 70 games before the coronavirus pandemic abruptly halted the season. He provided the Rangers with a heavy slap shot from the point on their second power-play unit, and he scored four of his goals on the power play. Last season, he finally developed chemistry with his defense partner Miller, who had a strong rookie season. The two became a reliable pair and they excelled defensively.

Unfortunately, Trouba broke his thumb blocking a shot, but he showed toughness, returning to the lineup earlier than expected. He played well in his return, and though he didn’t produce big numbers offensively, he was dependable and made good decisions with the puck. He finished the season with two goals and 10 assists in 38 games.

Late in the season, he suffered a concussion and missed the final few games of the season. Miller struggled with Trouba out of the lineup, and the Rangers missed his toughness as Tom Wilson took a cheap shot on Artemi Panarin, which prematurely ended the star winger’s season.

Expectations for Trouba This Season

Though Trouba is still only 27 years old, he has played 516 NHL games, which is far more than any other defenseman on the Rangers’ roster. It’s likely that many of the young blueliners will go through some growing pains and struggle at times, which makes it crucial that he consistently plays well.

The Rangers will certainly rely on Fox and likely either Lundkvist or Jones for their power play, so Trouba can focus on playing in a shutdown role. He still has a powerful shot and can contribute offensively by making good passes to start the rush and by making smart pinches in the offensive zone.

This offseason, the Rangers signed veteran blueliner Patrik Nemeth to help the team defensively and on their penalty kill, but they will also depend on Trouba while shorthanded. He’s never been afraid to play physically to clear the net and block shots. The team will also need him to be effective while holding onto leads late in games.

The 2021-22 season will be an important one for Trouba. He hasn’t been able to play as well with the Rangers as he did for the Jets in the 2018-19 season, but he has proven to be a warrior during his time with the Blueshirts. He took on a leadership role and is one of the candidates to become the team’s next captain. If he can stay healthy, play well defensively, and chip in offensively, it would go a long way towards helping the Rangers make the playoffs, as they will rely heavily on him this season.

I grew up in Brooklyn, New York, rooting for the Rangers, Yankees, Giants, and Knicks. When my dream of playing shortstop for the Yankees fell short, I started writing about sports instead. I’m a proud graduate of the Philip Merrill College of Journalism at the University of Maryland.