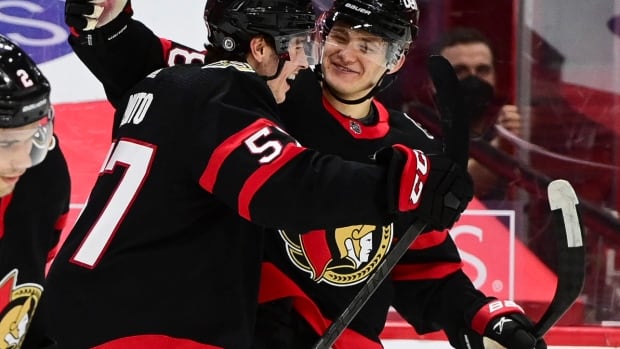 Tim Stutzle feels like a rookie all over again.

And in a lot of ways, he still is.

The Ottawa Senators forward got a taste of NHL life during the league’s pandemic-shortened season after being selected third overall at the 2020 draft.

Stutzle went through his first training camp, got used to playing on the smaller North American ice, learned some of the rigours of competing in the best league in the world and registered a respectable 12 goals and 29 points in 53 games.

There’s also a lot he didn’t get to do, including team dinners, exploring new cities, road trips to the U.S. and playing in front of fans because of COVID-19 restrictions that kept Canada’s seven franchises north of the border in a self-contained division.

“Everything is going to be new again,” said the 19-year-old German.

Despite the bizarre experience of being basically walled off from the rest of the world in a new country far from family and friends, all while playing inside cavernous, empty arenas, Stutzle is convinced dipping his toes in NHL waters helped him prepare for what’s to come.

“It was really strange,” he said. “It was, mentally, really, really hard. But I’m really thankful that we were able to play last season. That’s something really special. Not everybody could play. I saw it over in Germany, there were so many young kids who couldn’t play hockey that full year.

Stutzle’s teammates opened their exhibition schedule with Sunday’s 3-2 overtime road victory against the Winnipeg Jets before 14,625 fully vaccinated and masked fans at Canada Life Centre, but he stayed behind in the nation’s capital, meaning his NHL debut with a live crowd could come Wednesday when Ottawa hosts the Toronto Maple Leafs.

“Without fans it’s just totally different,” he said. “I couldn’t be more happy and excited that there will be fans in the building cheering for us.

A key component of a young group looking to take big strides this season — Senators general manager Pierre Dorion has declared his club’s rebuild over — Stutzle knows the mistakes of 2020-21 can’t be repeated when Ottawa opens its 82-game schedule back in the ultracompetitive Atlantic Division on Oct. 14.

“We have a really, really young core,” said Stutzle, whose team began last season with an ugly 2-12-1 record before finishing a respectable 21-16-4. “We had a lot of rookies … we’re going to be really young again.

“But we want to be way, way better, especially in the start of the season.”

He’s so talented … great personality and fun to be around.— Senators defenceman Thomas Chabot on teammate Tim Stutzle

“[A] more confident, bigger, stronger kid that has the real ability to score goals,” said Smith, set to begin his third season in charge of a franchise that hasn’t made the playoffs since 2017. “I don’t want to put a number on him — then he feels he’s got to live up to that — but I could see him scoring 25.

Senators defenceman Thomas Chabot is convinced Stutzle has just scratched the surface heading into a fourth professional season after two in Germany prior to being picked by Ottawa.

“I don’t think we’ve seen it all, that’s for sure,” Chabot said. “He’s so talented … great personality and fun to be around.

“Really happy to have him on my side.”

Another side Stutzle will almost surely be part of this winter is Germany’s entry at the 2022 Olympics in Beijing on a roster led by Edmonton Oilers star Leon Draisaitl.

The road, however, is going to be difficult for the Germans — silver medallists at the 2018 Games in Pyeongchang when NHL players didn’t take part — in a group with Canada and the U.S.

“I hope we can battle hard against those teams,” said Stutzle, who leads his country’s next generation of high-end talent. “If you work hard, skate a lot, I think everything can happen.

“Everyone works for each other.”

Stutzle didn’t experience fans inside rinks last season, but he was part of a special moment that went viral on social media.

A group of kids and parents in his Ottawa neighbourhood celebrated the teenager’s first three-goal NHL game by throwing dozens of hats over the backyard fence of the house he shares with teammates Brady Tkachuk — who remains unsigned ahead of the 2021-22 campaign — and Josh Norris.

“I’m not a guy who loves to be in the middle of everything,” Stutzle recalled with a smile. “In the beginning it was a little bit awkward for me to stand there, and everybody’s looking at me, but still something I will never forget. I’m really thankful. It’s been great time in Ottawa.

“Everybody is really, really pumped [about] the team we have. I couldn’t be more excited to be part of that and be part of the group.”

Stutzle’s also pumped and excited to experience NHL life – for real this time.