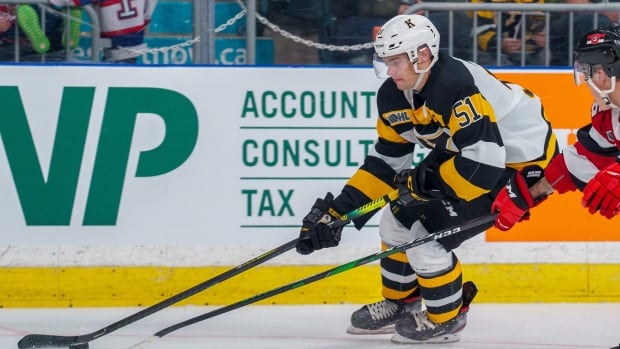 This is an excerpt from The Buzzer, which is CBC Sports’ daily email newsletter. Stay up to speed on what’s happening in sports by subscribing here.

Quick note before we get started: No newsletter tomorrow as we observe the National Day for Truth and Reconciliation. Back Friday.

Junior hockey is finally getting back to normal

When the pandemic hit back in March 2020, it seemed like a potentially devastating event for the NHL. But the league bounced back pretty quickly, all things considered, returning from a 4½-month hiatus to complete a full Stanley Cup playoff tournament by the end of September. The late ending resulted in a shortened 2021 season, but it didn’t really impact the subsequent playoffs either, apart from pushing them back a few weeks. As for the millions in revenue missed along the way, owners appear well on their way to recouping a big chunk of it by slapping ads on helmets, jerseys and seemingly any other piece of real estate your eyeballs might fall upon. Sure, these new “revenue streams” are eroding the aesthetics of the sport and we’re probably about 18 months away from seeing a Škoda parked in the stands at every arena. But, hey, at least we weren’t deprived of any playoff games.

Not so in junior hockey. The pandemic wiped out the 2020 post-season for all three major-junior loops under the Canadian Hockey League umbrella, and damn near cost them their 2020-21 seasons too. The Ontario Hockey League, in fact, never dropped the puck. The Western Hockey League limped through a 24-game, divisional-matchup-only schedule before cancelling its playoffs again. The Quebec Major Junior Hockey League closed its eyes and plowed through a turbulent regular season marred by outbreaks, quarantines and shutdowns that resulted in teams playing anywhere from 26 to 43 games. The Q managed to get to the playoffs and even crown a champion (Victoriaville) in early June. But that was it. The Memorial Cup tournament — junior hockey’s crown jewel — was cancelled for the second straight year, leaving the CHL without an overall champ since the QMJHL’s Rouyn-Noranda Huskies won it in May 2019.

Junior hockey is hoping to return to normalcy starting Thursday night, when the QMJHL drops the puck on what it expects to be a full 68-game season for each team. The WHL will try to do the same starting Friday night, though there will be no interconference play this season. Also, teams in the B.C. and U.S. divisions will be limited to intradivisonal play for the first month as bus travel is still not allowed across the Canada-U.S. border. It’s a similar deal in the OHL, which opens its own 68-game season Oct. 7. The three U.S.-based teams will only face each other until at least the end of October, and everyone else will mostly play within their own conference. Each league wraps up its regular season in the first week of April and is expecting a full playoff tournament to follow. The Memorial Cup is scheduled to begin June 3 in Saint John.

Will it all play out as planned? Who knows. But the WHL, OHL and QMJHL gave themselves a better chance by making COVID-19 vaccination mandatory for players, coaches, staff and other team personnel. Each league is also aiming to return to full-capacity crowds at some point, but that’ll depend on the myriad health departments and governments whose jurisdictions they play in. The OHL has teams in Ontario, Pennsylvania and Michigan. The WHL spans B.C., Alberta, Saskatchewan, Manitoba, Oregon and Washington. The QMJHL doesn’t cross the border, but it’s in four different provinces: Quebec, Nova Scotia, New Brunswick and P.E.I. A decision to lock down again in any of these places could impact the entire league.

If things go smoothly enough, we should finally get a good look at super prospect Shane Wright. The potential No. 1 pick in the 2022 NHL draft plays for the OHL’s Kingston Frontenacs, whose last meaningful game was nearly 19 months ago. Wright was only 15 at the start of the 2019-20 season, but he put up big numbers: 39 goals in 58 games and, as Sportsnet’s Mike Shulman points out in this story, more points per game than Connor McDavid posted as an OHL rookie at the same age. Wright also dominated the under-18 world championships last season, scoring nine goals in five games to lead Canada to gold. Wright was cut from the Canadian world-junior team last year as a 16-year-old, but he should be one of the stars of the upcoming tournament in Edmonton and Red Deer, Alta.

Another guy to watch is Connor Bedard of the WHL’s Regina Pats. He matched Wright with 14 points at the U-18 worlds and racked up 28 points (including 12 goals) in 15 games for Regina last season. The 16-year-old isn’t eligible for the NHL draft until 2023.

Read more about some of the rising stars hoping to make their mark as the CHL returns to normal in this story by CBC Sports’ Myles Dichter. Learn more about the players and teams to watch in the video below with CBC Sports’ Rob Pizzo and CHL play-by-play man Victor Findlay. And, if you haven’t heard, six CHL games will be broadcast live on the CBC TV network this season — starting with this Saturday’s matchup between the Prince Albert Raiders and Bedard’s Regina Pats at 3 p.m. ET / 1 p.m. CT. The games can also be streamed for free on CBCSports.ca, the CBC Sports app and the CBC Gem streaming service. See the full slate here.

Previewing the CHL season has never been more difficult

All three leagues in the CHL had very different “COVID seasons”, which makes this campaign very tough to predict. 9:47

Andrew Wiggins’ and Kyrie Irving’s vaccine hesitancy might cost them. The NBA announced today that players who miss games because of new mandates in New York City and San Francisco requiring pro athletes to be vaccinated against COVID-19 to play indoors will not be paid for those games. The league’s policy could mean a lot of lost dollars for Irving and the Canadian Wiggins, who play for Brooklyn and Golden State, respectively, and have made it known that they’re opposed to getting the vaccine. Based on his 2021-22 salary of about $35 million US, Irving earns around $427,000 per game. Wiggins, who somehow is making almost $32 million this season, gets paid about $385,000 a game. Read more about his anti-vaccine stance in this piece by CBC Sports contributor Morgan Campbell.

The Beijing Olympics are also putting pressure on unvaccinated athletes. They’ll be required to spend 21 days in quarantine ahead of the Games as part of organizers’ plan to deliver “safe and successful Olympic and Paralympic Winter Games as scheduled,” the International Olympic Committee said today. Like at this summer’s Games in Tokyo, no foreign fans will be allowed to attend events. But the plan right now is to permit fully vaccinated spectators who live in mainland China. Read more about the policies revealed today here.

The Blue Jays fell to fourth place in the American League wild-card race. Last night’s 7-2 loss to the Yankees in the opener of a critical series dropped Toronto three games behind New York for the top wild card. The Jays are still one game behind Boston for the second and final spot after the slumping Red Sox lost to awful Baltimore. But Seattle, despite a minus-50 run differential (217 runs worse than Toronto’s!) is now half a game up on the Jays after winning its third straight. Toronto will try to bounce back tonight at 7 p.m. ET as Jose Berrios takes the mound against Yanks ace Gerrit Cole.

Manny Pacquiao retired. Boxing retirements should always be taken with a grain of salt, but this one might actually stick. Pacquiao is 42, suffered a deflating loss last month in his first bout in two years, has a side gig as a senator in the Philippines and is planning to run for president next year. Pacquiao will go down as one of the best and most beloved fighters in history, with a classic rags-to-riches story that saw him punch his way out of extreme poverty to win titles in a record eight different weight classes. He thrilled fans with spectacular knockouts powered by his blazing speed and unorthodox punching angles. Pacquiao’s memorable fights include his superstar-making 2008 TKO of Oscar De La Hoya, his four showdowns with archrival Juan Manuel Marquez, and his 2015 megabout vs. Floyd Mayweather Jr., which came a few years too late to live up to the hype and ended in a loss by decision for Pacquiao but still earned both fighters a fortune. Read more about Pacquiao’s career here.

You’re up to speed. Talk to you Friday.