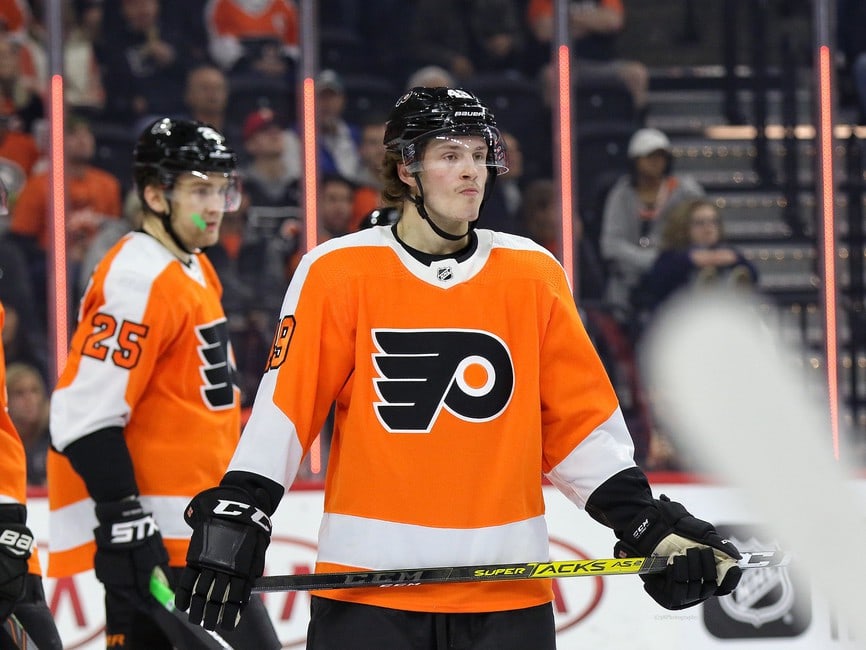 There are some great options from the Philadelphia Flyers that will be available late in fantasy hockey drafts. Between a breakout campaign, a resurgence, and a bright future, these options shouldn’t disappoint, especially at the spots they will be selected at.

Certain players lose a ton of value from not covering all the stats used in some league. But then again, some stats can be overvalued. Maybe you just want a player that will be consistent in putting up points because you already have a couple of guys covering hits and penalty minutes for example. These players won’t give you the best all-around results, but they should be great sleeper picks late in your draft.

Joel Farabee had himself a great breakout campaign on a team that struggled to do anything. A 20-goal scorer in his second season in the league, also enjoying a 38-point campaign in 55 games. He is ranked in Yahoo Fantasy Hockey as projected to go after the 200th pick. There is real value here if he continues his upward trajectory and the rest of the team bounces back. Last season he finished in the top 125 at the end of the season. It’s a no-brainer to select him in a later round and even worth it to reach on him before he is snatched up by someone else with the same strategy.

Farabee is the seventh-ranked Flyers’ player after finishing No. 2 on the team last season. If Kevin Hayes was healthy, it would probably push Farabee even further down the list too. As far as overall value goes on the Flyers, he can add to the grittier categories your team may be lacking and looking for in the late rounds. Not the most physical player, but for a skill guy he can provide more penalty minutes and hits than almost any other player ranked above him on the team.

A not-so-bold prediction is that Farabee finishes the season in the top-3 on the Flyers’ roster. 60 points is a reachable mark for him, as he was on a 56-point pace over 82 games and is only going to get better at age 21. It is much harder to find players that can contribute to the goals category for you. Hopefully, he proves to be a very efficient point getter again this season for the team, and he is given more time on the power play to rack up the category where he is lacking in the most. As you will find here, NHL.com ranks Farabee in the top-10 for sleeper picks in the entire NHL. Generally, it’s very hard to find players on the top power-play unit late in drafts, but if you can predict trends, it will benefit you immensely.

The last four seasons that James van Riemsdyk played, he amassed in the mid-200s for shots. That will be near the very top of the league in any given year. With a full season hopefully on the horizon for this player, we could see the shot totals jump up again and give him a dominant category that you will want to target.

He ranked first on this Flyers’ team at the end of last season in fantasy, just shy of the top-100. This year his projection plummeted to a preseason rank of 240. That is massive for anyone willing to ride the season that van Riemsdyk just came off of. He finished the 2020-21 season tied as the leading scorer on the team. I feel like I may be repeating myself, but the Flyers are ready for a strong bounce-back season. What comes with that is a spread of wealth, especially on a balanced team like this.

He lead the team in power-play points last year, and most of the traffic goes through him, as he is always parked net-front and is very good around there. He will provide your team with goals and assists while giving you average physical play. As a projected late-round selection, count on van Riemsdyk to add good value for the offensive production he brings to the lineup.

We got a look early at where Morgan Frost was slotted in. In Hayes’ absence, Frost was playing in the middle of the Flyers’ second line. It seems as though Alain Vigneault wants to spread out the scoring threat a little. If he is able to stay in the top-six for the first couple of months while Hayes is sidelined, he should at least provide some nice value early.

As a player that you will have to go off the board to select, he is a sneaky option that could give your team a boost as a last-round pick or top free-agent pickup. Don’t wait too long on Frost, his value will likely drop as the season progresses unless his play is fantastic and the coach keeps the lines spread out. He has the possibility of playing with players with higher fantasy value such as Claude Giroux, Cam Atkinson, Travis Konecny, and the aforementioned Farabee and van Riemsdyk.

Due to a down year, the Flyers keep being underestimated. They have a deep lineup that can generate scoring chances throughout. The top-ranked fantasy points producers happen to be the ones left off the lists of who to draft. These players should be taken, and you may as well be the one reaping the rewards that come from it. Hop on the Flyers’ fantasy bandwagon and ride it all the way to the playoffs.

Rob Couch is a THW freelance writer covering the Edmonton Oilers and Philadelphia Flyers. As a fantasy hockey veteran, he will be informing you on the best weekly options to scoop up for your matchups. He doesn’t mind turning back the clock for throwback articles into hockey history too.