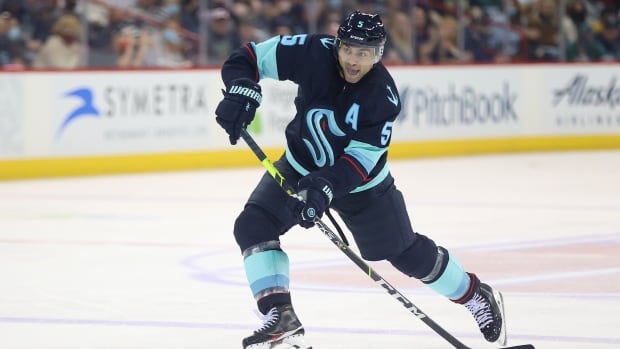 Mark Giordano didn’t wait until the NHL regular season to return to the Saddledome.

The former Flames captain feels it’s important to get pre-season games in with the Seattle Kraken, who plucked the defenceman from Calgary in the July 22 expansion draft.

Giordano, who turns 38 on Sunday, was a Flame for 14 years and captain for eight.

He won a Norris Trophy in 2019 when Calgary posted the best regular-season record in the Western Conference, and earned the Mark Messier Leadership Trophy in 2020.

Giordano faced his former club for the first time Wednesday in a game meaningless in the standings, but meaningful to him.

“I grew up as an adult here,” Giordano said before the game. “The thing that I would want [fans] to remember me as is, playing well or playing poorly, I gave my all every shift and every night and I’ll continue to do that.

“I have so many different memories of the city, good times on and off the ice. It’s a special place obviously for my family and I.”

Giordano still owns a home in the city. He predicted the former teammate most likely to chirp him on the ice this season is Rasmus Andersson.

“If there was one guy, I’d probably pick him to be the guy to give it to me no matter what,” Giordano said.

Barring injury, he’ll reach his 1,000-game mark in the NHL in early 2022. Any player approaching a thousand career games isn’t expected to play much in the pre-season.

Giordano feels preparation time is short with an expansion club, however.

“Being a new team, we’ve got to get familiar with each other and play games,” Giordano said. “As far as the team goes, just a lot of new faces. It’s a really important camp to get used to each other, get used to how we’re going to play.”

He has a year remaining on the six-year contract extension he signed with Calgary back in 2015. At $6.75 million US, it’s the largest cap hit of anyone on the Kraken’s roster.

Undrafted by any team throughout his hockey career, the six-foot-one, 200-pound rearguard thanked the Kraken for finally giving him that distinction when Seattle announced his name.

“There’s some shock there for the first few days,” Giordano admitted. “I went out to Seattle for the expansion draft and got home and a few days later, you start planning to get to the city and then the excitement came.

“I know I’ve played a long time. It’s a new start for me too. It’s a fresh start. It’s a new set of eyes watching you every night. Just looking forward to having a good year and playing well.”

When Seattle didn’t flip Giordano in a trade, he became the prime candidate to be the Kraken’s first captain.

“Everybody knows the quality of player he is,” head coach David Hakstol said Wednesday.

“Anybody that spent any time around him knows and understands the quality of person that he is. Tremendous to have in our dressing room, not only in his role that he plays for us on the ice but in a leadership role, so very important.”

Giordano inherited the ‘C” in Calgary after 16 years of Jarome Iginla wearing it. For the first time in almost a quarter-century, the Flames opened training camp without a captain.

Giordano’s former teammates were still grappling with his departure in training camp.

“He’s the type of player I want to become one day,” Calgary defenceman Juuso Valimaki said. “Now, we’ve got to learn how to live without him and play against him.”

Centre Mikael Backlund is now the longest-serving Flame in his 13th season.

“It was weird coming back here and Gio wasn’t here,” Backlund said. “He’s been here the whole time I’ve been here. We definitely miss him in the room.”

“I was thinking of buying a house in Toronto and he was saying, ‘Yeah, you know, maybe get some land,”‘ the Flames winger recalled during the NHL/NHLPA media tour earlier this month.

“Showed him some pictures to see what he liked and what he didn’t like. You could honestly talk to him about anything. He was there for me. I can’t thank him enough.

Seattle makes its first regular-season stop in Calgary on Dec. 23.

“I’m actually glad to get one under my belt here early in my time here [with] Seattle,” Giordano said. “The regular season one, I’m sure it will be a full building. It’s going to be a divisional game in December. It’ll be a pretty big game.”