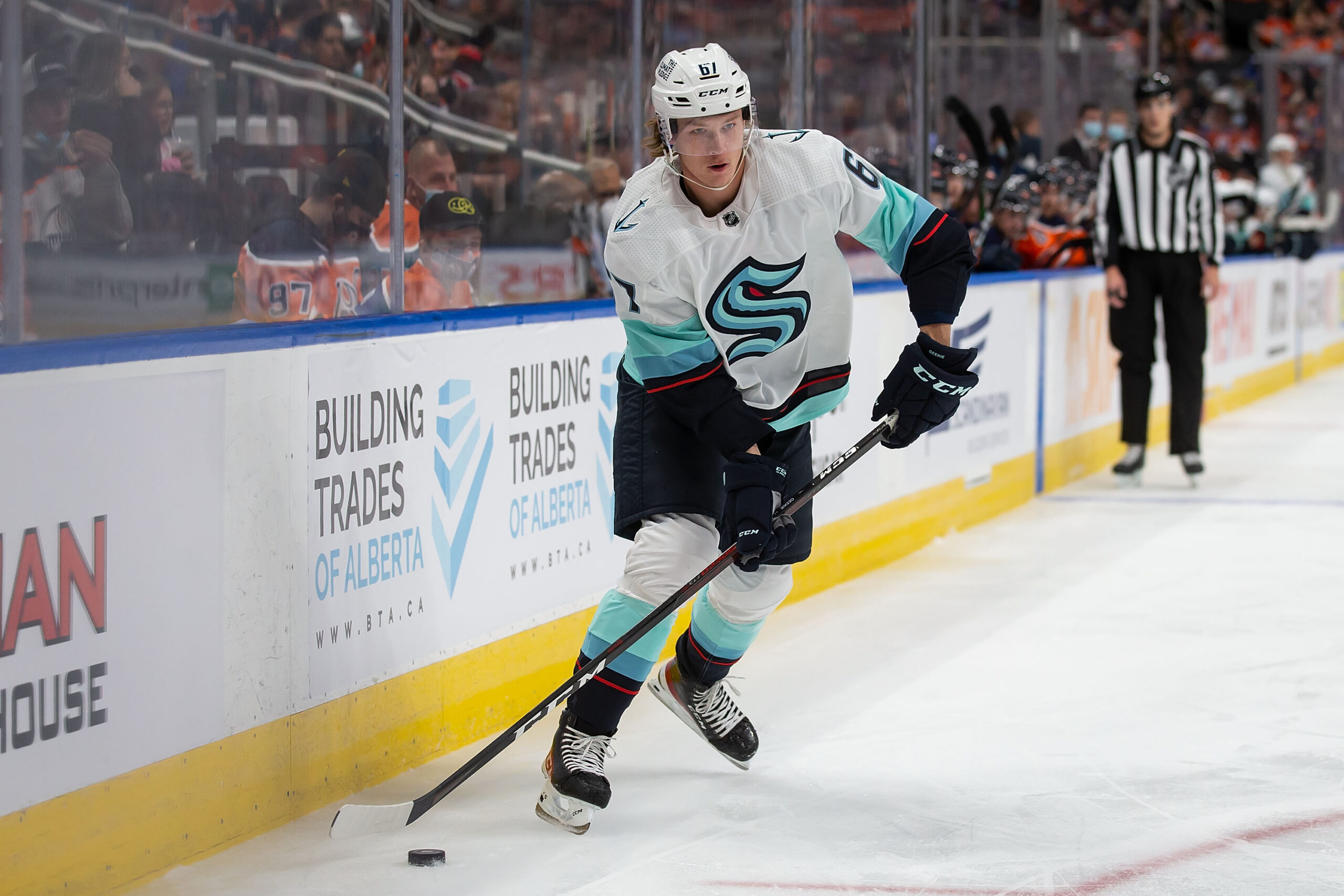 One player that has stood out over the Seattle Kraken’s first three pre-season games is Morgan Geekie. The former Carolina Hurricane is leaving his mark and showing why he deserves to be in the opening night lineup. Here is how he has done so far this pre-season.

Game One versus Vancouver

Unfortunately, the stat tracking is not available for this game, but Geekie looked great based on the eye test in the second half (from “Morgan Geekie makes sure first-ever Kraken game is a victory as it beats the Canucks in Spokane, The Seattle Times, 9/26/21.) He scored the game-winning goal in the third period and a power-play marker to put the game out of reach. As the game went on, he found his stride and was getting more and more opportunities late in the game. He stood out and was by far one of the best players on the ice.

Geekie’s return to a familiar barn was worth the price of admission. The Spokane faithful know him well as he was a pain to play against while with the Tri-City American’s of the Western Hockey League from 2014-2017. Although the crowd usually cheered against him, they put the past behind them as a former villain became a hero at the Spokane Memorial Arena.

Although the Kraken were hammered 6-0 by the Oilers, Geekie had a strong game all around. He found some chemistry with Kole Lind and Marcus Johansson and was one of the few players not on the ice for a goal against. He led all forwards in ice-time with 19:04 and had a positive Corsi rating of 51.52% by the end of the game.

It is evident that coach Dave Hakstol liked Geekie’s game despite the lack of production. No player on the Kraken had more time on the power play than he did, and the team was able to generate shots on the goal while he was on the ice. He was also tasked with the tough job of shutting down Connor McDavid.

In 5:40 minutes against McDavid at five-on-five, his line outshot last year’s Hart Trophy winner four to one, had more scoring chances, and high danger scoring chances. If Geekie can continue to show he can shut down the opposition’s top players, there may be room for him as a checking center on this roster.

For game three, Geekie did not have his best game but was still noticeable. He finished with one shot on goal as well as three individual chances created in 17:09 time on ice. The Kraken did not get as many power play’s as they did in the first two games, but he still was given 55 seconds of ice time on the man advantage.

This game saw Geekie partnered with Joonas Donskoi and Ryan Donato. The trio played as the team’s second line based on ice time but were not able to generate much offensively. The line did have some success during the intrasquad game back in Training Camp but were not able to find that groove against the Flames. There were mostly tasked with shutting down Calgary’s top line of Johnny Gaudreau, Mikael Backlund and Andrew Mangiapane. It did not go great for the trio as they were outscored two to zero while on the ice and registered a Corsi percentage of 30.77% as a line.

Although the line did not work, there were positives in Geekie’s game. He was able to block a shot showed he can move the puck around on the power play. Not his best game as a Kraken so far, but it is the preseason and was his third game in four nights. He still seems to have the coach’s trust, which should go a long way when deciding who makes the team and who does not.

The Kraken should give Geekie some time on the penalty kill. He has had limited opportunities in the past, but giving him a chance during the preseason could help improve his defensive structure and get him ready if needed during the regular season. Seattle is deep when it comes to penalty-killing forwards, but having an extra one can’t hurt and could pay dividends in the future.

Geekie has been the most impressive Kraken over the first three games. It was not set in stone at the beginning of the preseason that he was going to be part of the opening night lineup, but he has shown he can be an everyday NHLer through the first three games. If he continues to play like he has the past few games, he could even be elevated in the lineup as Seattle waits for Yanni Gourde to get back from injured reserve.