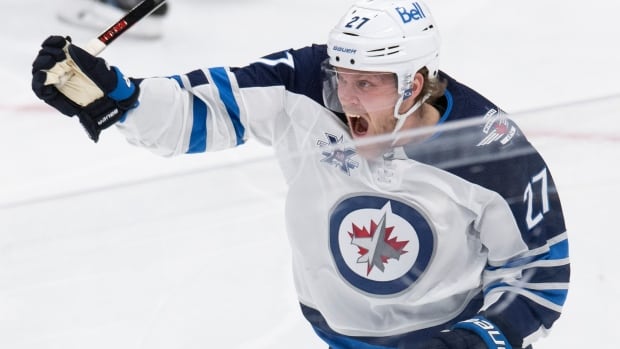 Winnipeg Jets fans might miss the speedy winger’s flight path if they blink this season. Ehlers worked on boosting his takeoff during the summer.

“You do sprints, you do all kinds of things like jumps, weighted jumps, everything to kind of build on that first few steps to get going,” Ehlers said earlier this week at training camp.

“I think that’s where I’ve been the slowest. I think I’m fine, I’m fast when I get going, but I’ve always wanted to get faster off the first three steps.”

Slow isn’t a word usually associated with Ehlers, whose flash and dash has been wowing fans since he entered the NHL as Winnipeg’s first-round draft pick (ninth overall) in 2014.

The 25-year-old forward from Denmark has also been quick to establish himself as a goal-scorer. He’s surpassed the 20-goal mark in the past five of six seasons, pumping in 21 goals and 46 points in 47 games last season.

While Ehlers said he also worked on “everything” to improve his game, head coach Paul Maurice wouldn’t be disappointed if the winger duplicates what he viewed as a “pretty special” 2020-21 season.

“If he has the same year he had last year, then he’s going to have a hell of a year,” Maurice said.

“So he starts there. If he can add to that, great. We think he can. It’s not even so much if you score five more or five less, you can still have a better year. I just want him to start there.”

What impressed Maurice the most about Ehlers last season was his intensity and consistency, which he attributes to the “maturation process.”

“He became a driver,” the coach said. “Some of his back checking and some of his defensive plays he made, and the intensity he played on the puck, was very inspiring.

“If your smallest guy is playing that hard, it really gets the bench wired up. That’s what I’m hopeful for. If he’s going to score 40, we’ll take it.”

The six-foot, 172-pound Ehlers also spent some time in the summer inspiring Denmark’s hockey community. He and the national team qualified for next year’s Winter Olympics in Beijing, a first for the country.

Ehlers had five goals and nine points in the qualifying tournament, including scoring the extra marker in the clinching 2-0 victory over Norway. His father, Heinz, shared the rare accomplishment with him as head coach of the Danish squad.

Ehlers was proud to raise the profile of the sport at home.

“Everyone interested in hockey in Denmark was watching those games,” he said. “The team that I practised with during the summer were very excited and some family and some friends.

“It was mostly in the hockey rink, but that’s also what we’re trying to change with the national team. We’re trying to get hockey a little more out there, so it’s very exciting.”

Ehlers also has a lot to look forward to in his seventh season with the Jets, in particular meshing with second-line centre Pierre-Luc Dubois, who was traded to Winnipeg from Columbus last season. Andrew Copp filled the spot on the other wing in Monday’s exhibition loss to Ottawa, but the trio didn’t play in Wednesday’s victory over Edmonton.

“We played some games last year, obviously, and we’re going to try and build off of that and continue creating that chemistry,” Ehlers said.

“I think there’s some things we need to clean up, of course. There always will be. But I like what we’ve been able to do and we’re creating chances and we’re playing the right way. It’s good.”