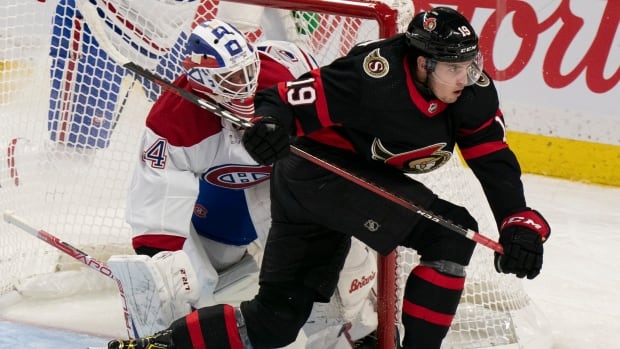 Ottawa’s youth movement paced the Senators to a 7-2 win over the Montreal Canadiens in pre-season hockey Friday.

Alex Formenton, 22, led the way with two goals and an assist. Drake Batherson, 23, and Josh Norris, 22, each produced a three-point night of a goal and two assists.

Shane Pinto, who wants to prove he can be a second-line centre, helped his cause as the 20-year-old picked up two assists.

“He’s been as good as anyone throughout camp. Just continues to make plays and plays the centre ice position so well; strong stick, good on faceoffs, plays on both sides of the powerplay and the penalty kill, so we think we’ve got a good player there.”

Formenton scores two of the seven Ottawa goals in a blowout of Montreal 1:53

Austin Watson and Egor Sokolov also scored for the Sens, while Matt Murray was solid in his first game since April 24 with 25 saves.

Alex Belzile and Christian Dvorak countered for the Canadians. Jake Allen allowed six goals on 29 shots over two periods before Kevin Poulin turned away four shots in the third.

Ottawa’s offensive output Friday was in stark contrast to getting shut out 4-0 by Toronto on Wednesday.

“We just made a lot more plays,” Smith said.

“We were fast. Norris and Batherson made a big difference. They make plays at a high level, but as a whole we worked pretty hard I thought.”

Formenton played alongside with Batherson and Norris in place of Brady Tkachuk, who remains unsigned and absent from training camp.

“With the situation we’re in, we’re looking to fill that spot at this point and [Formenton] did a real nice job,” said Smith.

“Obviously, his speed backs people off.”

With opening night less than two weeks away, Smith needs to have a backup plan should Tkachuk and the Senators remain at odds over a contract.

Chris Wideman, who is looking for a job on Montreal’s blueline, had two assists in the loss.

Poulin gave up a goal just 14 seconds into the third when Formenton scored his second of the night.

Four goals in the second period boosted the Senators’ confidence in their offence as the regular season approaches.

Ottawa led 2-1 after the opening period thanks to a couple of key saves by a steady Murray.

“It felt good to get those saves in early,” Murray said.

“[Montreal] came out pretty hot I thought and then throughout the game, I thought we just got better and better and our skill showed through.”

Johnny Gaudreau scored his first goal of the pre-season and added an assist Friday to lead the Calgary Flames to a 4-1 victory over the Vancouver Canucks,

Matthew Tkachuk also had a goal and an assist in Calgary’s first pre-season victory. Mikael Backlund and Brett Ritchie, into an empty net, also scored. The Flames started the pre-season 0-2-1

Jonah Gadjovich scored the lone goal for the Canucks, who dropped to 1-2-0.

Flames goaltender Jacob Markstrom got his first pre-season start and turned aside 14 of 15 shots over two periods. Dustin Wolf made seven saves in the third.

Calgary picked up nice goals by Johnny Gaudreau and Matthew Tkachuk on their way to a convincing win over Vancouver. 1:48

Gaudreau took advantage of a late line-up change which dropped Blake Coleman from the game roster. The vacancy resulted in Gaudreau shifting to a line alongside Elias Lindholm and Tkachuk.

Gaudreau scored the game’s first goal at 15:18 completing a slick tic-tac-toe cross-ice passing sequence with Lindholm and Tkachuk. Gaudreau capped it off neatly by firing a shot under the cross bar as Demko lunged across the crease.

Calgary led 2-0 at 3:30 of the second period on Backlund’s second pre-season goal.

The sequence began with a heavy hit by Flames defenceman Nikita Zadorov who lowered the shoulder on Jason Dickinson as he tried to skate the puck out of the Canucks’ end.

While Luke Schenn and Zack MacEwen immediately came to over to defend Dickenson, play continued and Backlund made the most of the open ice by getting the loose puck and firing a shot past Demko.

Gadjovich’s deflection two minutes later cut the lead in half, but Tkachuk restored the two-goal cushion 6:54 into the third. He neatly deflected Connor Mackey’s centering pass over Demko’s shoulder. Gaudreau had the second assist.

Winnipeg Jets announce Rick Bowness as new head coach
After a Stanley Cup, Conn Smythe and Norris Trophy, what’s next for Cale Makar?
NHL draft prospect understands pressure-packed situations in the crease, off the ice
3 Potential Landing Spots for Evander Kane in Free Agency
Ranking the Oilers’ First-Round Picks of the Past 10 Years