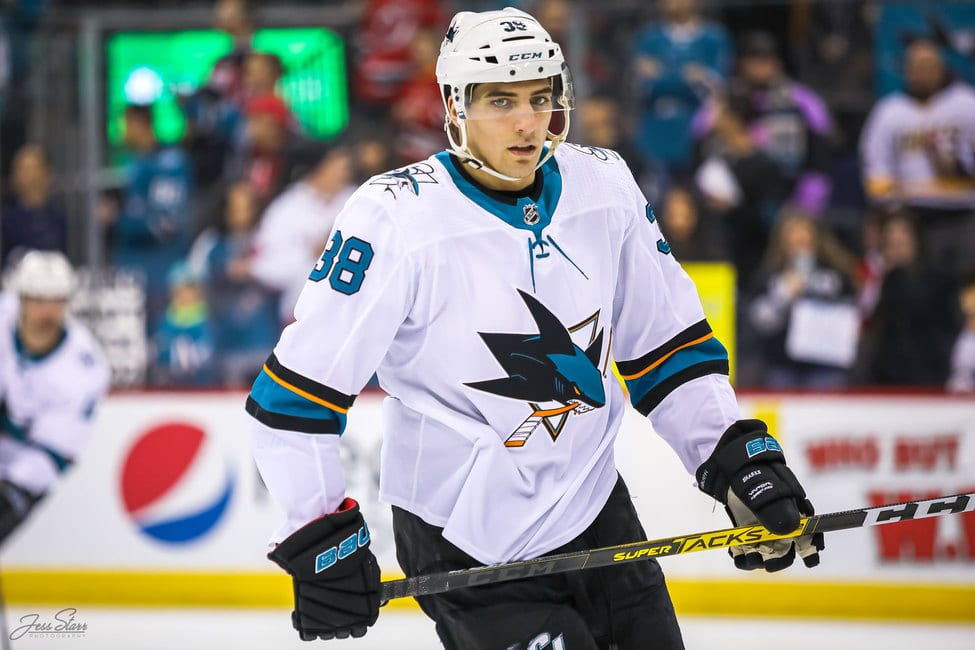 The San Jose Sharks have missed the playoffs for the last two seasons. The last time that happened was in 1995-96 and 1996-97. The silver lining then was that they selected Patrick Marleau second-overall in the 1997 NHL Draft, which helped change the direction of the franchise. This time, they selected seventh overall, but they may have picked the best player in the draft: William Eklund.

Eklund and the Sharks’ young players are worth getting excited about. Management has refused to use the word “rebuild” to describe what is happening, but regardless of what it’s called, the last couple of drafts have yielded some high-end players who may start contributing as early as this season. Here are three bold predictions for the Sharks in 2021-22.

Since Mario Ferraro first suited up for the Sharks in the 2019-20 season, his game has grown in leaps and bounds. It was a surprise when he made the team out of camp that season, and he has yet to look back. He has endeared himself to the fans with his positive attitude, his hustle, and his willingness to stick up for his teammates. He recently dropped the gloves in his very first fight in a preseason tilt against the Los Angeles Kings. Ferraro scrapped with Jacob Doty, who took a run at Eklund.

The coaching staff seems to like him too. In 2020-21, he ranked third in average ice time (TOI) behind Brent Burns and Erik Karlsson. Burns and Karlsson play a hefty amount on the power play, something Ferraro rarely gets. Looking at their even-strength TOI, it is roughly equal between the three, and according to PuckIQ, Burns and Ferraro played against a similar quality of competition in 2020-21, while Karlsson played against less skilled opponents.

To optimize the skills of their three best rearguards, the coaches need to let them do what they do best. According to Dobber’s Frozen Tools, Burns and Karlsson had one of the lowest offensive zone start percentages in their careers last season. While the defensive acumen of each former Norris Trophy winner can be debated, they are at their best in the offensive zone. The Sharks need to give each of them closer to 60% offensive zone starts and let Ferraro and the rest of the defensemen start in their own zone.

If the Sharks deploy their new big three (Karlsson, Burns, and Ferraro) appropriately, Ferraro should see the most even-strength TOI. Coupled with his steadying presence on the penalty kill and occasional cameo on the man advantage, he could easily lead the team in ice time, and the team will be better for it. At 36 years old, Burns continues to lose a step, and Karlsson doesn’t look like the same player, so they would likely play better without the added burden of heavy even-strength minutes.

2. Sharks Have a Calder Trophy Finalist

The Sharks have several candidates for a Calder nomination. However, I believe the frontrunners to be Jonathan Dahlen, William Eklund, and Ryan Merkley, though Alexander Barabanov, Lane Pederson, Adam Raska, Jasper Weatherby, and Santeri Hatakka have a shot as well, assuming they all play enough NHL games. It’s an exciting time, as the last time the team in teal had a Calder finalist was in 2011 when Logan Couture placed second to winner Jeff Skinner. Of course, Evgeni Nabokov won the award in 2000-01, but no Shark skater has ever won. Adin Hill is not eligible, and I doubt Alexei Melnichuk will play enough games or well enough, so if this happens, it will be a skater.

Several things will have to go right for this to happen. First, the Sharks have to score more goals. They finished the 2020-21 season 25th in goals per game. I imagine they need to at least be closer to the middle of the pack. They will also need bounce-back seasons from their best forwards, namely Logan Couture, Tomas Hertl, and Timo Meier. If those things happen, the opportunity is there to boost a Calder Trophy winner. Some of the best young players didn’t have the right opportunity to show what they could do last season.

Merkley has improved defensively from his first American Hockey League (AHL) season and throughout camp, but that remains a hurdle for him to play enough games to showcase his talent. It also hurts Merkley that the Sharks have six experienced NHL defenders in Burns, Karlsson, Ferraro, Marc-Edouard Vlasic, Radim Simek, and Nikolai Knyzhov. Merkley would need an injury or one of these players to be moved to make an impact. Knyzhov is injured and may not be ready for the season opener, and the Sharks have been trying to trade Simek for months, so Merkley may get a chance. Aside from Burns and Karlsson, the Sharks don’t have an NHL-ready right-handed defender.

Eklund has a ton of skill and a bright future, but it might be a lot to expect him to be a Calder finalist, even if he plays most of the season with the Sharks. He was impressive throughout development camp, then during the Rookie Face-Off Tournament in Arizona, and now at training camp. Eklund will be 19 on Oct. 12, so he would play this entire season at that age, which might help him a bit.

Only three 18-year-olds have won the Calder in the last 40 years, Nathan MacKinnon, Tom Barrasso, and Dale Hawechuck. During that time, ten 19-year-olds have won, but the rest were older. Being older and having played an entire season in the SHL will help Eklund. According to Sheng Peng of San Jose Hockey Now, Eklund is a “top-nine forward in San Jose” (‘Roster Cuts: Path for Eklund, Raska, Merkley to Make Sharks?’ San Jose Hockey Now, 10/01/21).

Dahlen would be my choice to win it. He is one of the few Calder-eligible skaters who are not waiver exempt. The others are Barabanov and Pederson, who I don’t think have a good chance of getting Calder votes. Dahlen has been phenomenal in the Allsvenskan the last two seasons, where he helped his hometown team Timra IK get promoted to the SHL for the second time. His 71 points in 45 games in 2020-21 have an NHL equivalent of about 45 points in an 82-game season. That probably isn’t enough to win the Calder, but it might be enough to get votes.

It’s also reasonable to think that with a healthy dose of power-play time and better quality teammates, Dahlen could exceed a 50-point pace, which is what I think he needs to finish in the top three of voting. He has never had this kind of opportunity before and has played consistently with the best players the Sharks have to offer in training camp. These are big assumptions, but if he plays most of the season, the Sharks score more goals, he gets top-six minutes, and plays on the top power-play unit, he should have a very productive season and earn legitimate Calder consideration.

This prediction has more to do with the lack of talent in the Pacific Division than anything else. After the Vegas Golden Knights, who should walk away with the division title, every other team has major question marks. The Edmonton Oilers have the second-best odds to win the division according to Sports Betting Dime, and I expect them to finish second. After those two, the Seattle Kraken are an expansion team, so no one knows. The two other Canadian teams (Calgary Flames and Vancouver Canucks) had underwhelming seasons in the North Division in 2020-21 and are looking to bounce back.

The California teams, once the class of the division, are predicted to finish as the bottom three. However, I think the Los Angeles Kings and Sharks have a shot at that third spot. Most likely, only three Pacific teams will make the playoffs as the Central has the better overall quality teams, so the Sharks would have to finish third in order to make it.

In order for this to happen, most of the rookies mentioned above will have to have an immediate impact. It seems like some of them will, though it’s hard to say which ones. Unlike the young players from last season, who were not ready, many of the young Sharks in 2021-22 have professional experience and that should help them make a bigger impact. Adin Hill and James Reimer will have to be close to league average if not better. It’s hard to imagine they will be worse than Martin Jones and Josef Korenar. According to Evolving Hockey, Hill and Reimer saved two goals above average in 2020-21, while Jones and Korenar were negative 14. It seems unlikely Hill and Reimer will be worse.

A Season of Hope

More than anything, the Sharks want to be more competitive this season. Of course, that means making the playoffs, but even if they don’t, their youth needs to take a step forward if they have any hope of being competitive in the next few seasons. The excitement about the prospects and young players will wane if they don’t start to take meaningful steps toward being competitive.

Victor Nuño is a physician in private practice in Santa Cruz and an associate professor of osteopathic manipulative medicine at Touro University in California. He is an avid hockey fan ever since the San Jose Sharks joined the NHL in 1991. He plays, watches, and consumes everything related to hockey, but especially the Sharks and AHL affiliate Barracuda. In addition, he is a father to two beautiful young girls and husband to a wonderful wife. Follow me @VictorNuno12