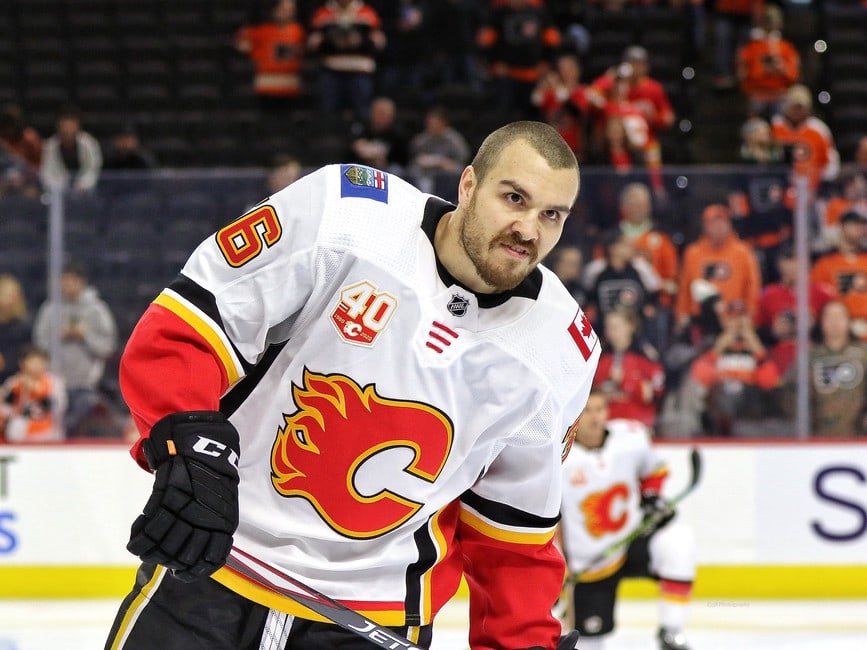 This week on Blue Jackets News & Rumors, it turns out more than one player was not welcome at Training Camp. We’ll review each situation. Then we talk about the other top prospect not named Yegor Chinakhov or Cole Sillinger whose season is ramping up. Finally we preview the Monday night game in Buffalo and tell you what to watch for.

We found out on Media Day that Zac Rinaldo was unvaccinated and not welcomed at Blue Jackets’ training camp. That day, GM Jarmo Kekalainen said the ball was in Rinaldo’s court as to what happened next. We found out this past week what that next step was.

Rinaldo was not welcomed in Cleveland either.

The Blue Jackets announced that Rinaldo would not be welcomed with the Cleveland Monsters given his unvaccinated status. Two important things to note in this announcement. First, the team will honor Rinaldo’s contract and pay him. Second, if another opportunity comes up, they will not stop him from pursuing it.

Here is what Kekalainen had to say about the decision to exclude Rinaldo from Cleveland.

“Our position has been very clear that our organization is committed to doing everything we can to ensure the health and safety of our players, coaches, staff and fans. Given the impact COVID-19 continues to have in our communities, we believe the best course of action given Zac’s vaccination status is to not have him report to Cleveland at this time.  While we respect an individual’s right to make a personal choice with regards to being vaccinated or not, we have a responsibility to do what we believe is best for our organization.  We will honor Zac’s contract, but if he wants to pursue any other opportunities to play this season we will allow him to do so.”

Let’s keep one thing in mind here. The Blue Jackets had an interest in bringing Rinaldo on board before this became an issue. They did sign him. They clearly wanted him around because of the type of game he’s known for. Tom Wilson, anyone?

The question that will work itself out now is who can step up when needed in a physical sense? Unlike past seasons, the Blue Jackets come in with a more skilled team. But those power forwards such as Josh Anderson and Pierre-Luc Dubois are gone. We’ll see how things go when the situation arises. But it is fair to wonder which players will answer the call.

Regardless of the above, the Blue Jackets handled this situation as good as anyone can ask given the circumstances. They are acting in the best interest of the club while still honoring the contract.

It turns out that Rinaldo was not the only player waived by the Blue Jackets last week. Goaltender Cam Johnson joined Rinaldo on waivers. It was curious because he wasn’t at camp nor did he appear in any preseason games. Recall he was signed by the Blue Jackets in order to fulfill the necessary requirements of exposure to Seattle in the expansion draft.

Head coach Brad Larsen was asked about Johnson. “He didn’t meet the fitness standards,” Larsen told the media on Friday. As it stands, he’s far on the outside and not welcome at camp.

The Blue Jackets also signed goaltender Jean-Francois Berube to a one-year, two-way deal for this season. This was a combination of Berube’s play in the preseason and Johnson’s fitness situation. Expect Berube and Daniil Tarasov to share time in net. Also Jet Greaves will be part of the rotation in Cleveland as well.

The Blue Jackets are making a stand this preseason. If you are not vaccinated like Rinaldo, you are not welcome. If you came into camp out of shape like Johnson did, you are not welcome at camp either. Johnson has been assigned to the Cleveland Monsters but it will be interesting to see if he can do anything to get back into the rotation. As of now, that doesn’t look very good.

All the early chatter around the younger Blue Jackets has centered around Chinakhov and Sillinger after their performances in Traverse City and in the preseason. But the third member of their top-end prospect pool had a preseason game on Saturday night. He scored less than two minutes into the game. Enter Kent Johnson.

Johnson received a pass at center and had a clean-cut breakaway that he buried. The general belief amongst the experts is that Johnson is the Blue Jackets’ top prospect. It’s easy to see why given the skill he has.

The Wolverines won the game 7-1 against Bowling Green. Johnson finished with a goal and three assists on the night. That’s a decent way to start a season.

Johnson’s Wolverines will be must-see TV all season long given the immense talent they have on the roster. He will play a huge role in where this team goes eventually. Anything short of a National Championship will be seen as a disappointment.

The Blue Jackets play their fifth of eight preseason games Monday night in Buffalo. This game perhaps is the most telling to date of what the potential opening night roster could look like. Here is the roster for the game in numerical order.

What To Watch For

On Monday afternoon, the Blue Jackets cut down to 30 players remaining at training camp. Here is a list of those players who were cut.

There are no real big surprises on this list. One could perhaps argue Josh Dunne could have had a shot at making a bottom-six spot but with competition already fierce as it is, those on the outside had to blow the door down. Dunne should have success in Cleveland while continuing his development.

Tyler Angle and Carson Meyer will be worth watching in Cleveland as impact players. The Monsters open their season on Oct 15 at home against Syracuse. Expect big things from this duo.

After these cuts, there are 18 forwards, nine defensemen and three goalies remaining. There is opportunity especially in that bottom-six with four preseason games remaining. There’s no better time than now to stand out. It starts Monday in Buffalo.