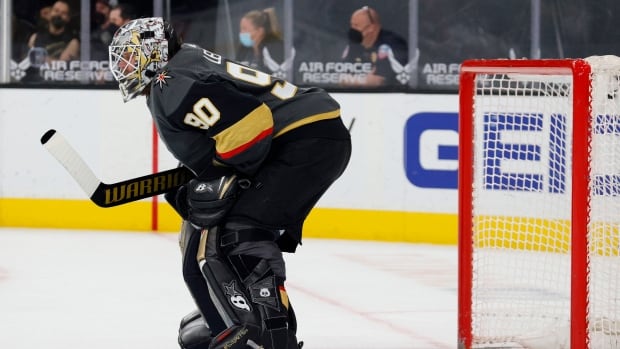 Vegas goaltender Robin Lehner said Tuesday he is encouraged about inciting change in hockey after having conversations with the NHL and NHL Players’ Association about concerns he voiced on social media over the weekend.

The NHL reached out to Lehner to set up an interview after he made several accusations Saturday night on Twitter, including that “many teams” give players drugs without a doctor’s consent. He also accused the Buffalo Sabres of botching ankle surgery he had while playing for the the team and brought up Philadelphia Flyers coach Alain Vigneault in a series of tweets about the state of the league.

Lehner, a longtime mental health advocate who has been open about his bipolar disorder and own struggles off the ice, hopes to continue the dialogue in a more private fashion from now on.

“This weekend was a cry for help from this league, the league that I love, that has given me so much,” Lehner said. “I’m just looking to protect the younger players, and the only way to affect change in my mind is to do it in a non-public fashion. I feel very encouraged about the talks that we might have and we are going to have moving forward.”

Lehner said former teammate Jack Eichel’s stalemate with the Sabres over how to best treat an injury was not the only reason behind his comments on social media.

“It was definitely part of it, but it doesn’t take away what I’ve been fighting for for a long time, which is mental health and problems I’ve gone through, what I’ve seen personal friends suffer from and friends outside the league,” Lehner said. “We all worry about his neck and whatnot, but what about his mental health? It’s a part of life — my whole journey.”

Vigneault on Monday denied accusations that he ever gave players drugs without a doctor’s consent. He has never coached Lehner, a 30-year-old Swede now in his 12th NHL season, at any level.

Asked about Vigneault, Lehner said he understands there will be backlash and believes it’s worth it to try to implement change.

“I’m fine with that because this is a huge step in the right direction,” said Lehner, who added he did not tweet to seek attention. “If it can help 1 per cent, I’m really happy about that.”

Wranglers’ Phillips named AHL Player of the Week
How lessons from 2019 have impacted the Blues’ strategy this season
Blues complete wild comeback in overtime!
Draisaitl caps Oilers comeback against Panthers after Bouchard forces OT
Islanders Should Target 3 Sharks in Trades