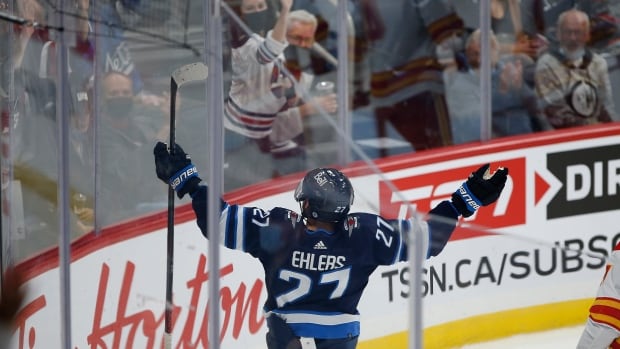 Speed can make all the difference in hockey and one of the Winnipeg Jets’ fastest forwards continues to prove that.

Using his impressive speed, Nikolaj Ehlers scored two goals, including the game-winner, to lead the Jets to a 3-2 victory over the Calgary Flames on Wednesday in a pre-season NHL game before 14,937 fully-vaccinated fans at the Canada Life Centre.

“I knew that I would have my chances, but I like that they went in tonight.”

When Ehlers is flying, it is contagious, said Jets defenceman Josh Morrissey.

“We talked tonight about playing fast and obviously, I’ll give my opinion, when Nikky is playing fast, he’s at his best and shooting the puck kind of coincides with that,” said Morrissey, who scored the first goal of the game. “I thought our first period was really good and overall, we were trying to play fast and shoot the puck, and I think it just turns our pace up a little bit.

Nikolaj Ehlers scores two goals, including the game-winner to lead Winnipeg to a 3-2 victory over Calgary. 0:59

With Flames defenceman Nikita Zadorov off for interference, Ehlers took a pass from rearguard Nate Schmidt near the blue line and quickly fired a wrister that beat Calgary goalie Dan Vladar. In the first period, Ehlers scored on an end-to-end run, slapping a shot over Vladar’s left shoulder from the top of the face-off circle.

“When Fly is doing that, it’s dangerous every time,” said Morrissey. “When you’re watching him, whenever he shoots, especially when he’s in full stride, there’s a chance that it’s going in.

“We talk about Schmidty [Nate Schmidt], his energy, Fly’s energy, the energy we have there as a group, it’s infectious. It makes you want to be a shooter and try to have that excitement to score as well.”

Ehlers had several chances to get the hat trick but missed on a breakaway and lost his stick after his teammates tried to set him up for an empty-net goal.

WATCH | Question to answer for each Canadian NHL team this season:

Vladar stopped 37 shots for the Flames.

Although it looked like Calgary had tied it with Vladar pulled from the net, it was called off due to a high stick after a video review.

Forward Andrew Mangiapane, on the power play, and forward Glenn Gawdin both scored in the second period for Calgary (2-4-1).

“It didn’t go our way tonight, but I don’t think we should be putting ourselves in those positions, starting off behind early on,” Mangiapane said. “They’re a good team. They were fast on us. We weren’t really breaking the puck out too well at the start.”

The Jets, who had just lost back-to-back games on the road to Edmonton and Vancouver, snapped their two-game losing streak.

It was the first of a home-and-home series, with the Jets facing the Flames in Calgary on Friday. It was also Winnipeg’s last home pre-season game.