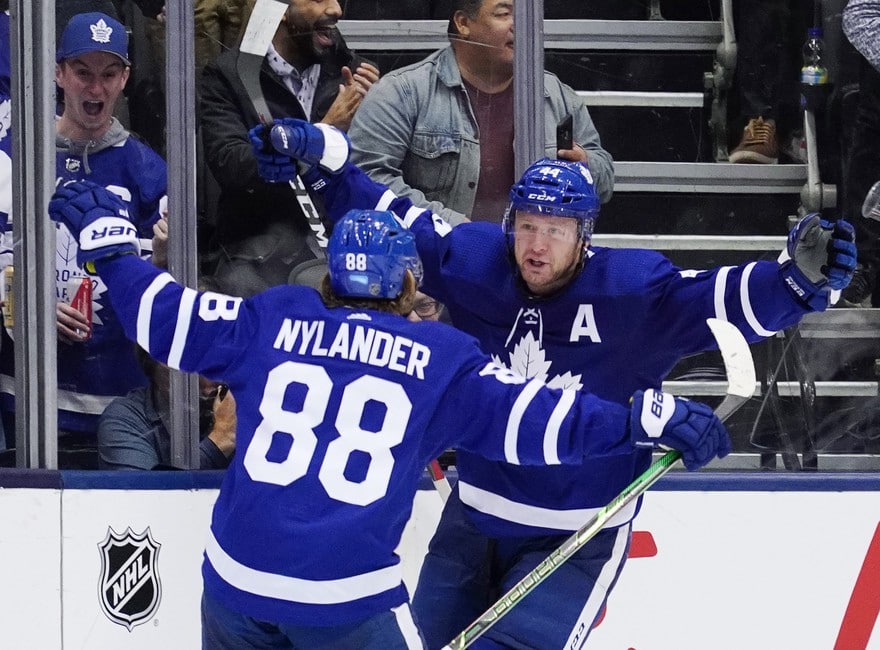 In this edition of Toronto Maple Leafs’ News & Rumors, I’ll look at the news and rumors headed into the final preseason game tonight against the Ottawa Senators. Who’s in? Who’s out?

Second, I’ll speculate which of those players remaining among both the forwards and the defensemen will likely stay with the team after the final cuts are made. Those cuts are coming soon.

Item One: Jack Campbell Will Start the Preseason’s Final Game

Goalie 1A for the 2021-22 regular season Jack Campbell will be getting the call in net for the preseason’s final game against the Senators. It’s likely that Campbell will also be the regular-season starter when the Maple Leafs line up against the Montreal Canadiens this Wednesday.

I, for one, like the logic and the new philosophy of having the team’s goalies split more games. Given how often goalies seem to be injured, it just makes perfect sense. Certainly, Campbell has earned the chance to enter the season as the team’s starter. Playing tonight will offer him a chance to get ready for the start in Wednesday’s opening game against Montreal.

I also like Petr Mrazek, who seems to have his head screwed on straight, is willing to share the net, and has been a capable goalie for a number of seasons. As I suggested, I’m hoping for a more or less even split in the net so that both goalies are as ready as possible for the postseason.

Auston Matthews suggested as much after Thursday’s practice, but his wonky wrist isn’t quite ready for the last preseason game; and, he won’t be in tonight’s lineup. Maple Leafs’ head coach Sheldon Keefe noted that the Matthews’ decision is precautionary. That likely means that the team’s star center could play in a more meaningful game, but tonight just isn’t that game.

In the meantime, rest and rehab will help Matthews become more ready for the regular season. Matthews took part in Friday’s full practice, and nothing seems to suggest that anything’s hidden in his prognosis. He seems to be healing and, from what we hear, will be ready to play on Wednesday.

Item Three: Is Travis Dermott Injured or Moved Down?

Travis Dermott was suffering from a calf injury, but he’s taken part in both Thursday and Friday practices. However, curiously he skated with Alex Biega on the team’s fourth pairing for a second straight day. Is that because his injury is still bothering him, or has Timothy Liljegren replaced him in the team’s third-pairing on their depth chart?

By the way, Biega has been a surprise during preseason. I didn’t know what to expect, but from what I’ve seen he’s played well.

Item Four: Jake Muzzin Seems to Be Over His Undisclosed Issue

Jake Muzzin has also been practicing again with the team. During the middle of the week, Muzzin had missed practice with an undisclosed dis-ease of some sort, but he now seems ready for the regular season.

From my perspective, Muzzin is one of the key players on the team – especially during the playoffs. When he’s been injured during the postseason, the team simply can’t seem to replace him. He’s been a strong part of the team since coming from the Los Angeles Kings.

Although William Nylander didn’t travel with the team to Muskoka, he’ll be in tonight’s lineup for the preseason final. For those Maple Leafs’ fans who hadn’t heard, Nylander wasn’t able to practice with the team on Thursday because he wasn’t double-vaccinated early enough. He had received his second dose of the vaccine, but it hadn’t had time to take effect.

That said, the waiting time between his second dose and its effective time will soon have passed, so he’ll be able to play. When the regular season begins, Nylander will take his usual place on the team’s second line; however, it isn’t yet clear who his line-mate on the left side will be – will it be Ilya Mikheyev or Michael Bunting? That seems to be one of the bigger questions remaining for the team’s top-six.

After tonight’s game, there are still a few cuts to be made. Looking at the forward units, it’s likely that one of the four remaining forwards (Adam Brooks, Kirill Semyonov, Michael Amadio, or Kurtis Gabriel) is likely to remain with the team. If the team believes it needs more grit, Gabriel is likely the player who will remain with the team. He brings something very different to the mix.

Looking at the defense, unless something’s happened to Dermott’s status, likely the young Swedish defenseman who’s impressed the coaching staff the most – either Rasmus Sandin and Liljegren – will stay on the roster. My guess is that Sandin’s quarterbacking of the second power-play unit gives him an advantage.

Biega will likely be able to clear waivers. He’s played well during the preseason and can be useful if someone is hurt during the season. Of course, all this is speculation. We’ll learn soon enough. The regular season is approaching.