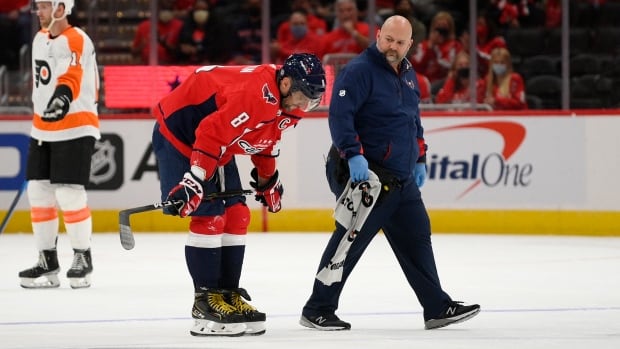 Alex Ovechkin left the Washington Capitals’ preseason finale against Philadelphia on Friday night with what the team called a lower-body injury and is set to be examined further Saturday.

Ovechkin bumped into Flyers forward Travis Konecny midway through the first period and then went down to the ice. Washington’s captain was slow to get up and skated off on his own while not putting much weight on his left leg.

The 36-year-old went down the tunnel instead of remaining on the bench and missed the remainder of the period. The team announced at the first intermission that Ovechkin would not return.

“Any time a player leaves the ice you’re concerned,” coach Peter Laviolette said. “They’re going to re-evaluate him tomorrow and assess him for practice the next day. I think that’s where it’s at right now.”

Alex Ovechkin hobbled off the ice after hitting Travis Konecny. <a href=”https://t.co/4M3nFl2IoL”>pic.twitter.com/4M3nFl2IoL</a>

Flyers coach Alain Vigneault, whose team came in banged up, knocked on the wooden table in front of him pregame when talking about avoiding injuries.

“I think both teams — touch wood — want to get out of this healthy,” Vigneault said. “It starts for real next week.”

The Capitals are already expected to start the season without top centre Nicklas Backstrom because of a hip injury. Backstrom has not skated at all during training camp.

Ovechkin is beginning a $47.5 million US, five-year contract and sits one back of Marcel Dionne for fifth on the NHL career goals list. He’s 164 behind Wayne Gretzky for the record.

WATCH | 9 things you should know about the NHL season… in 90 seconds:

The Russian winger has shown remarkable durability throughout his career, especially in light of his bruising style. Ovechkin missed seven of the final eight games last season with a groin injury — more time than he missed the previous 10 years combined.

“We were kind of joking in the room there that that Russian blood, he’ll be back soon,” teammate T.J. Oshie said. “I don’t know if he even misses a day. He’s a tough guy. It’s always concerning seeing him lay there, but no doubt he’ll be back scoring goals in no time.”