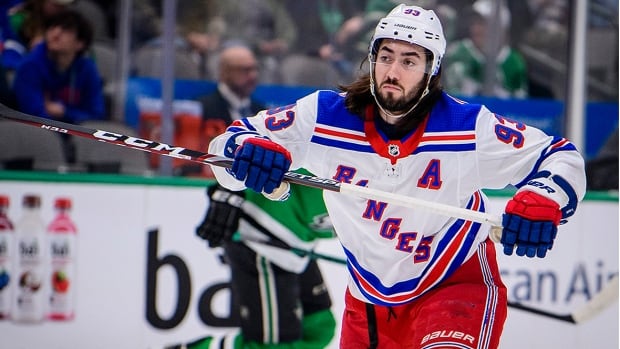 The New York Rangers and top centre Mika Zibanejad have agreed to an eight-year contract worth $68 million US.

Zibanejad will count $8.5 million against the salary cap beginning next season and through 2029-30. The 28-year-old Swede was a point-a-game player last season with 24 goals and 26 assists in 50 games.

“Since joining the team in 2016, Mika has emerged as one of the premier players in the NHL,” first-year general manager Chris Drury said Sunday in a statement. “In addition to being a great player on the ice, Mika is an exemplary person off of the ice.

“We are fortunate to have him as part of our Rangers organization and are excited that he will continue his career in New York.”

New York now has Zibanejad and forwards Artemi Panarin, Chris Kreider and Barclay Goodrow signed for at least the next five seasons. Drury’s next order of business could be a new contract for Norris Trophy-winning defenseman Adam Fox, who is in the final season of his entry-level deal.

The Rangers open the season Wednesday at Washington.

Watson, 29, sustained the injury during Ottawa’s 5-4 pre-season victory over the Montreal Canadiens on Thursday.

Watson recorded three goals and 10 points in 34 games last  season, his first with the Senators since they acquired him from the Nashville  Predators for a fourth-round pick of the 2021 NHL Draft.

In 340 NHL regular-season appearances, Watson has 39 goals and 87 points with the Predators and Senators. He was drafted 18th overall by Nashville in 2010.

The Vancouver Canucks have traded beleaguered defenceman Olli Juolevi to the Florida Panthers.

The Canucks announced the news in a release Sunday, with general manager Jim Benning thanking Juolevi for his years of service and wishing him well in his future endeavours.

Vancouver selected Juolevi fifth overall in the 2016 NHL entry draft but the 23-year-old Helsinki native struggled to crack the Canucks roster and spent time toiling in the minors.

He appeared in 23 games for Vancouver last season, recording two goals and an assist.

Juulsen, who hails from Abbotsford, B.C., was held off the scoresheet in four games for Florida last year.

Lammikko, 25, had five points (four goals, one assist) and 10 penalty minutes in 44 games with the Panthers last year.

The native of Noormarkku, Finland, was a third-round pick for Florida in the 2014 draft, and has amassed 11 points (four goals, seven assists) and 16 penalty minutes in 84 NHL games.

The Colorado Avalanche signed defenseman Jack Johnson to a one-year deal on Sunday.

Johnson, 34, was in Colorado’s training camp on a professional tryout and finished the preseason with three assists in five games.

“He provides a steady presence and brings a lot of NHL experience to our team,” Avalanche general manager Joe Sakic said. “We like what he has added to our blue-line over the past few weeks and we’re pleased to have him on the club as we head into the start of the season.”

Johnson played last season for the New York Rangers, but was limited to one goal in 13 games and ended the campaign early after having core muscle repair surgery in March.

Johnson has skated in 950 games over 15 seasons with the Rangers, Los Angeles Kings, Columbus Blue Jackets and Pittsburgh Penguins.

He has career totals of 71 goals, 303 points and 529 penalty minutes while amassing 100 or more blocked shots in nine different seasons and 100-plus hits in seven campaigns.