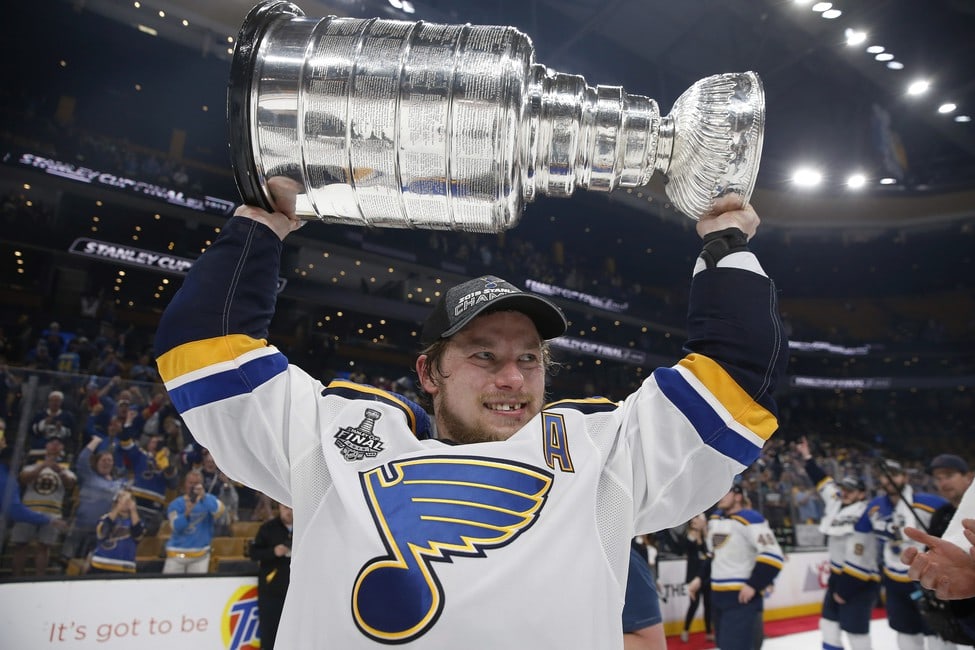 The Montreal Canadiens have a long to-do list in this short offseason after a loss in the Stanley Cup Final to the Tampa Bay Lightning.  General manager (GM) Marc Bergevin needs to make decisions on the team’s pending free agents, who stays who goes, which roles must be filled, which can be filled by graduating players from the minors, among other things.

Bergevin must also figure out how to improve the Canadiens’ scoring. Rookie winger Cole Caufield, who scored four goals in ten regular-season games (a 33-goal pace in a full 82-game season) and 12 points in 20 playoff games, will be a major help offensively; however, relying on a rookie to improve on the NHL’s 18th ranked offensive team – with 159 goals in 56 games – won’t be enough.

The GM needs to find more goals, and signing an Unrestricted Free Agent (UFA) may be one option. However, a trade might be easier to complete and possibly be more beneficial, especially if it includes St. Louis Blues superstar Vladimir Tarasenko.

Tarasenko has reportedly requested a trade because he is upset that team doctors failed to repair ligament damage in his shoulder in two separate surgeries, and the problem wasn’t discovered until he consulted a doctor outside the organization.

“He is upset with the team’s handling of his shoulder surgeries in 2018 and 2019 – his first two of three such surgeries, which were both performed by Blues physicians – and feels there’s no trust left between him and the organization.”

– Jeremy Rutherford (from “Blues Winger Vladimir Tarasenko requests a trade, per sources: Why he wants out, possible destinations and more,” The Athletic, 7 Jul 2021).

In the same article, Rutherford named Montreal as a possible destination. Tarasenko has a full no-trade clause (NTC), which means he will need to approve any trade. But it shouldn’t be too difficult to sell him on the Canadiens. Given the Habs recent run to the Stanley Cup Final, the emergence of their young centers, and the proven play of their veterans like goaltender Carey Price, their league-wide reputation has surely improved.

When healthy, Tarasenko is a proven 30-plus goal-scorer. Before his injury issues, he had five consecutive 30-goal seasons or more with a career-high of 40 goals in the 2015-16 season.

His two-way game isn’t that strong, so he would need to play along a reliable center, which the Canadiens have. That said, his strengths are in the offensive zone. Tarasenko has an elite shot that makes him a scoring threat from anywhere. He is also capable of finding space in the slot to get scoring opportunities. His playmaking abilities are underrated, and he can create passing lanes using his lateral mobility and elite puck skills.

He is also aggressive along the boards and excels at scoring off a cycle game just as easily as he does off the rush. Tarasenko has a very high compete level and uses his six-foot, 225-pound frame to win most of his one-on-one battles along the boards or in front of the net. All of these skills translate into a dangerous power play (PP) weapon. For the Canadiens, who were 17th in the NHL with a 19.2% success rate on the power play, a player of his talents is needed.

However, the reason Tarasenko wants out of St. Louis is the same reason that teams should be wary of acquiring him: his injury history.

He hasn’t played a full season in two years, and he’s had three surgeries to repair his shoulder. In 2020-21, he missed significant time due to an undisclosed lower-body injury. At 29 years old, he has put significant mileage on his body, and the team that acquires him might not get him fully healthy at any point in the two seasons that remain on his contract.

As noted on the THW affiliate podcast Habs Unfiltered Episode 171, a mutually beneficial deal would swap Jonathan Drouin in return for Tarasenko.

A one for one trade in this case could be realistic, or at least be a realistic basis for a deal as these two players would be a fit for each respective team. Tarasenko would fill the Canadiens’ need for skill and help on the power play.  For the Blues, Drouin’s skill set as a playmaker would help increase their scoring, and Drouin would be able to remove himself from the intense spotlight in Montreal.

Drouin has been on the long-term injury reserve since April 28 for undisclosed personal reasons. Without the pressure to be a league-wide star playing for the Canadiens, which is an intense market even without being a native of Quebec, Drouin could focus on his game and not the media circus that has followed him since he arrived in Montreal.

This trade would offer the Blues $2 million in cap savings in both years, but also $4 million in actual dollars. For a team whose market is significantly smaller than the Canadiens, that is a worthwhile savings. For Montreal, one of the league’s top-earning franchises, an extra $4 million against the cap isn’t significant enough to walk away from a possible deal.

Bergevin is entering the final year of his contract and no extension being announced yet, so he may be more open to completing a major trade to help fill a need for the Habs roster than he would have been otherwise. Even if he were desperate to make any major moves, Bergevin already has a reputation as a GM who goes after blockbuster trades. He’s done so almost annually – Max Domi for Josh Anderson, Alex Galchenyuk for Domi, the Drouin trade, and, of course, the controversial PK Subban for Shea Weber trade – it wouldn’t be out of character for Bergevin to pull the trigger on a deal like this, especially for Tarasenko who is skilled, but also a character player with Stanley Cup experience.

After their success in 2020-21, the Canadiens will expect to continue to be a playoff team. If Bergevin can add Tarasenko’s contract, it would leave enough cap space to add to the roster elsewhere as well. Also, if Tarasenko remains healthy, the added scoring and skill would help ensure that the Habs remain competitive when they return to the Atlantic Division.

Canucks: 5 Worst Jim Benning Trades
Today in Hockey History: Jan. 27
Simpson, Gaunce lead on and off the ice in Cleveland
Hockey, jobs, children, guitar, custom suit all in a day in the life of a PHF player
Canadiens Low-Risk Gambles On Locals Bearing Fruit