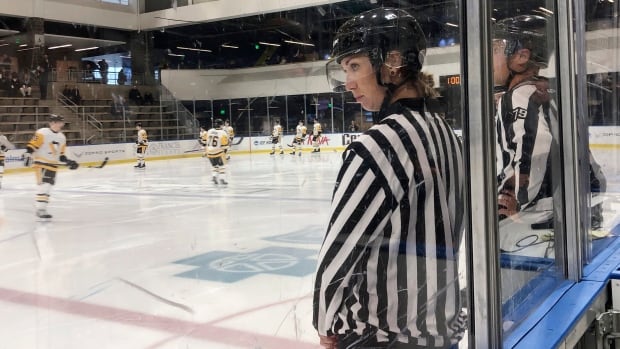 Ten female officials will work games in the American Hockey League this season, the highest level that women have reached in that position in professional hockey.

“It’s been on our radar for a while now,” AHL president and CEO Scott Howson told The Associated Press by phone Monday. “They’ve got good experience. Whether it’s Olympics, college hockey — both men’s and women’s — they’ve done some NHL prospect tournaments. It’s just time now for them to graduate into a higher level of pro hockey.”

Many of the women participated in officiating combines run by the NHL and AHL in recent years. Guay, Cooke, Welsh and Hanley were also selected to work NHL prospect tournaments in 2019.

All 10 female officials went through a mentorship program last year run by the NHL and NHL Officiating Association, which supplemented the on- and off-ice training many got from combines.

Working in the AHL is another step toward the possibility of female officials in the NHL, much like the NFL and NBA already have.

“This is a huge step, all of these women going into professional hockey,” NHL director of officiating Stephen Walkom said. “They’ve all earned it and should be recognized for it.”

The NHL and AHL have worked closely to develop a pipeline for officials, both men and women, to move through the pro ranks. The women’s world hockey championship was another place for NHL scouting and development director Al Kimmel to unearth talent for the officiating side.

That scouting now moves to AHL rinks this season.

“Everybody that works in the American Hockey League is a prospect from an officiating side because our scouting and development team is there and we get to see them to see how they manage professional hockey, how they call the game, can they keep up with the pace of professional hockey because it’s the second best league in the world,” Walkom said. “From our side, we want to support them in this next step, and, sure, we hope that one day we have both men and women conquering the American Hockey League so that we have a great supply of officials all in turn for the NHL.”

Howson pointed to Kim Ng becoming the first female general manager in Major League Baseball and strides in hockey scouting and development, and hopes the AHL adding female officials shows how opportunities for women are growing in the sport.

“It’s opening up doors,” Howson said. “We all play at the highest level we can, and then sometimes we’re just not able to advance as far as we want, and this is another way where you can take a different path and get to a different level, a higher level.”

Guay, who refereed at the 2018 Winter Olympics in South Korea and has worked Division I games, feels ready for the next step in her career, which could eventually lead to the NHL.

“Everybody in the AHL arenas strives to get to that next point, and certainly for me this is my entry point to the AHL and now it’s time to perform out there just like everybody else on the ice,” said Guay, who will work the Lehigh Valley Phantoms/Wilkes Barre-Scranton Penguins game Saturday. “For them to be able to put myself and these other women into these games, it shows they have confidence in us. To know that certainly helps me as I’m ready to get out there to drop that first puck.”