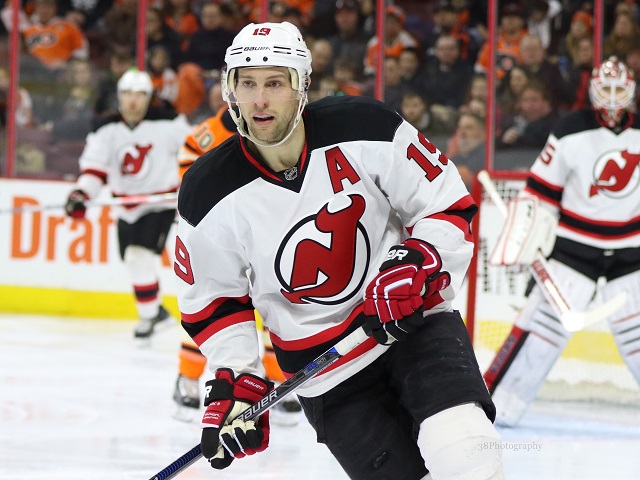 In less than a week, the New Jersey Devils will be hitting the ice for their home opener. It will be the first time since 2006 that Travis Zajac will not be part of their opening line-up. It it still a surreal feeling knowing he will not be on the ice this season, especially when Andy Greene and Zach Parise have reunited with Lou Lamoriello at UBS Arena.

Ahead of the 2021-22 season, I thought it would be nice to take a trip down memory lane and remember some of Zajac’s best on- and off-ice moments with the Devils. Let’s begin with why he was a fan favorite in New Jersey.

Zajac has been a favorite among fans for over a decade. During his retirement press conference he reflected on how much Devils fans have meant to him and his family. Over the years, it would have been difficult to find someone who did not like the Winnipeg native. Whether it was throwing a puck over the glass or signing autographs outside the Prudential Center, he always made time for fans.

Emily Leboeuf and her family run a sports store in New Jersey and have seen firsthand how great of a guy Zajac is.

“At a signing at Sports Minded Unlimited, I explained to Zajac that I suffered a concussion the day before at lacrosse practice,” said LeBoeuf. “I saw him three weeks later at a season ticket holder event and the first thing he said to me was ‘How’s your head? I hope you’re feeling better.’ He remembered, that’s the type of guy Travis Zajac is.”

During the 2008-09 season, head coach Brent Sutter had stroke of genius, and put together one of the best lines Devils history. Zajac along with Parise and Jamie Langenbrunner created the now famous “ZZ Pops” line. Their combined skill and chemistry brought fans to their feet time and time again, with all three players finishing the season as top scorers on the team.

“Unless you play with him, you don’t understand how really good he is,” said Parise of Zajac. “I was fortunate to play with him for a long time. I don’t know how this guy (remains) one of the most underrated players.”

The “ZZ Pops” line brings back a moment of nostalgia. The team may not have won a Stanley Cup during their reign, but they were competitive, and constantly qualified for the postseason. Zajac may not have been the flashiest guy on that line — those honors would go to Parise — but it was his play in the offensive zone that allowed Parise do what he did.

3. Passing of the Torch

Pavel Zacha, Jack Hughes, Nico Hischier and Mike McLeod have all had the opportunity to call Zajac a teammate. The young forwards watched him in the face-off circle, and had the chance learn from one of the most underrated centers in the league. McLeod made his NHL debut during the 2018-19 season. Since then, he has been trying to grow his game and Zajac was a player he looked up to.

“I like to watch centermen that play both ends of the ice, can be thrown out there to win D-zone face-offs, on the penalty kill, and can cash in at the offensive end,” said McLeod last season to Devils media. “Kind of like Travis Zajac, who was here for so long, that’s who I’ve been kind of watching a lot this year, and he’s been a huge help for me.”

Zajac became the 67th player in NHL history to play 1,000 career games with one franchise. Fans witnessed the evolution from his draft selection on June 26, 2004, to his milestone 1,000th game on Feb. 21, 2021. Within that time frame, there were hat tricks, playoffs pushes, and broken records.

On March 15, 2011, he tied former Devils Ken Daneyko’s ironman streak by appearing in 388 consecutive games. Daneyko’s streak began on Nov. 4, 1989, and ended on March 29, 1994. The defenseman held the record for 17 seasons until Zajac tied and then broke the record in a game against the Ottawa Senators.

“When you think about it, it is a lot of games,” Zajac told NHL.com at the time. “But that’s the way I would like it. I would like to play in every game, like to compete in every game. That’s the fun part about playing hockey… getting involved in the game. I know it’s not fun to be injured and sitting out for games, so that’s why you keep up with your routine and preparation and hopefully it pays off.”

The spring of 2012 gave Devils fans the rush of excitement that has been missing since 2003. Facing a possible elimination at the hands of the Florida Panthers, the Devils needed an overtime hero. It was Zajac who found the puck on his stick, and scored the game-winning goal within the first five minutes of OT.

Zajac received a pass from Ilya Kovalchuk in the offensive zone and quickly got the puck past Panthers goaltender Scott Clemmensen. The Prudential Center erupted with cheers while “Rock and Roll, Part 2” by Gary Glitter echoed throughout the arena. Parise leaped into the air with joy, and the entire team swarmed Zajac in the corner. It was a beautiful sight that will forever be engrained in the minds of Devils fans.

Zajac wore the Devils’ crest with pride. He embodied what it truly meant to be a Devil by playing the game the right way. Fans could not ask for more as he scored crucial goals at the height of his career, and transitioned into a role model for the next generation of players. Zajac is still with the organization in an on/off-ice player development and consulting role, while also working to grow the club’s youth hockey initiatives.