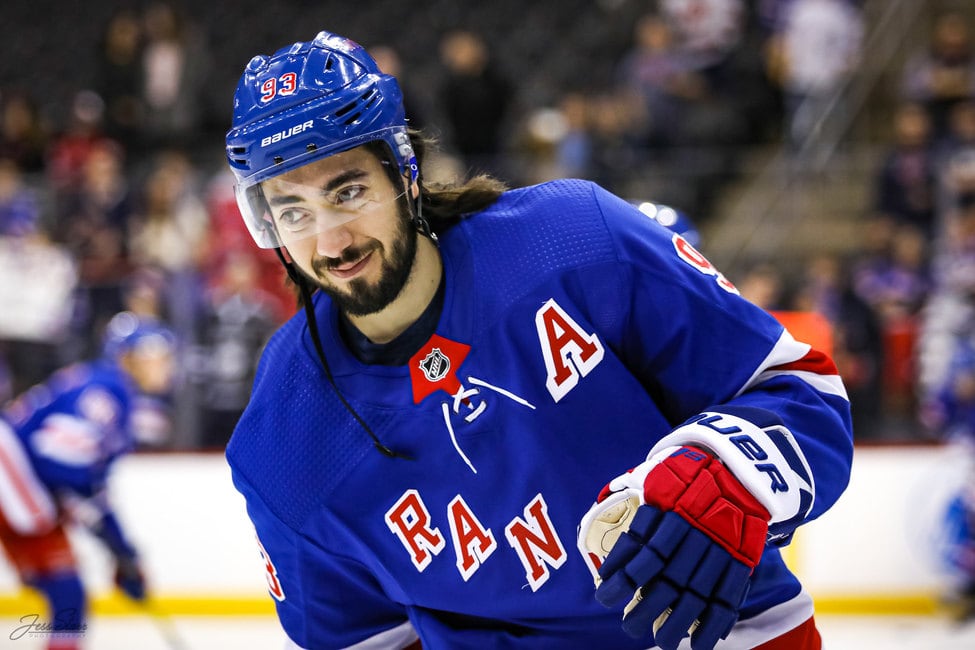 The New York Rangers bought themselves a figurative exhale last weekend, locking up Mika Zibanejad long-term and bringing some clarity to their center situation – which nonetheless remains an issue that the Blueshirts appear to have few outside options to fully solve.

Both team and player got some of what they wanted in the eight-year, $68 million extension announced Sunday. The Rangers locked in an $8.5 million average annual value that’s about $1-2 million below what Zibanejad would likely have been offered as an unrestricted free agent next summer. The price that Zibanejad’s camp extracted for holding down his AAV was the maximum contract term that the club could offer.

There’s little doubt that the Rangers would have preferred a shorter term to the deal, but their top pivot had plenty of leverage. In the end, the negotiation was fair, with both sides compromising and a little bit of hometown discount also coming into play.

Getting the contract done days before the season opened was crucial, eliminating the distraction and uncertainty of having to go into 2021-22 with Zibanejad’s future on Broadway uncertain. It also significantly slows down the churning rumor mill that’s been spitting out the Jack-Eichel-to-the-Rangers speculation that has swirled for more than a year.

“Since joining the team in 2016, Mika has emerged as one of the premier players in the NHL,” general manager Chris Drury said of the dynamic center that’s averaged a point per game over the past three seasons. “In addition to being a great player on the ice, Mika is an exemplary person off of the ice. We are fortunate to have him as part of our Rangers organization and are excited that he will continue his career in New York.”

The timing for coming to terms on a deal that will keep Zibanejad in a Blueshirt through 2029-30 (his current deal has one more season to run before the extension kicks in) couldn’t have been better. Last week, the Florida Panthers came to terms with star center Aleksander Barkov on an eight-year, $80 million contract, eliminating a potential replacement for Zibanejad in free agency next summer.

Couple that with the uncertainty surrounding Eichel, whose neck injury that will require surgery and ugly stare-down with the Buffalo Sabres having transformed him into an unknown commodity for interested trade suitors, and the Rangers understood their best avenue to stability and production in the middle was already in-house.

Locking Up Zibanejad Creates Some Clarity in Rangers’ Center Situation

With Zibanejad’s situation resolved, there’s a much greater comfort level for Drury and co. as they try to figure how the rest of the depth chart in the middle will look going forward. While Eichel remains a long-shot option to join Zibanejad in the Rangers’ top six at some point, it could probably only happen if the Sabres retain 50 percent of Eichel’s $10 million cap hit in a trade – a scenario that’s highly unlikely to occur.

Once again, the team will look inward for its future second- and third-line fixtures at center, with the Rangers set to begin their final evaluation of whether 22-year-old Filip Chytil might be able to replace pending unrestricted free agent Ryan Strome to slot in right behind Zibanejad. Chytil put together a very encouraging training camp, although he’s yet to show he can handle the responsibilities of a full season centering a top-six line.

Or will 2021-22 solidify Strome as indispensible? Coming off yet another outstanding season as Artemi Panarin’s running mate, and with a strong preseason in the books, the 28-year-old has emerged as a leader for the team’s younger players and an upbeat personality on the ice and the dressing room that could prove difficult to replace. Re-signing him won’t be easy, as the fifth overall pick in the 2011 NHL Draft will command at least $6-7 million over five or six years with a season similar to the past two, during which he averaged 0.86 points per game.

Yet it might be doable, given the manageable AAV that Zibanejad was willing to accept. Because while the Rangers preferred not to go eight years with him, doing so allowed them to kick the salary cap can down the road – spreading out Zibanejad’s money over a longer period – in order to manage the coming financial crunch in the next few years.

Whether they re-sign Strome, or find some way to make Eichel fit, or neither, knowing Zibanejad will be in the picture makes the process easier – or at least, as easy as something like this can be.

Because Drury can see the writing on the wall. His next big order of business is tying up 2020-21 Norris Trophy winner Adam Fox, whose entry-level contract expires after this season and who won’t make less than $9 million per year on a long-term deal, using the extension of Colorado Avalanche star Cale Makar as a comparable. The Rangers could try to sign Fox to a bridge deal to again kick money obligations down the road, but that will end up making him more expensive in the long run – and the team’s financial situation in the not-too-distant future all the more precarious.

After that, by the summer of 2023, Kaapo Kakko, Alexis Lafreniere, K’Andre Miller and Chytil could all be looking at lucrative long-term extensions – provided they’re all still on the roster, of course. Nils Lundkvist’s ELC expires the following summer, and that’s to say nothing of players such as Sammy Blais and Julien Gauthier, who could prove to be unexpected longer-term options for the Rangers.

Drury has managed the Blueshirts’ cap about as well as could be expected to this point. The team is projected to have more than $8 million in space this season, $20 million next season and $31 million by summer 2023, when things could really get tight.

Yet you never know in an NHL that’s likely to have a mostly static salary cap for the next several seasons. What if Lafreniere, Kakko or another youngster follows Fox’s lead and grows into an elite player much faster than expected – necessitating a big early payday as good cap management? Will the club have enough room for trade-deadline acquisitions/offseason improvements? And will the Rangers be able to make a big-ticket acquisition such as Eichel if they need another star to put them over the top – without having to compromise the young talent they’ve accrued to form a Stanley Cup contender?

Such is life in the salary-capped world of an NHL that, like other leagues, took a big financial hit from the pandemic. That’s why Zibanejad’s $8.5 million AAV is advantageous for the Rangers. Though it’s hardly a huge bargain, every million or two saved helps significantly with roster construction under the current conditions the league is facing.

The extension, of course, isn’t likely to age well. Zibanejad will be 37 when his deal expires, so this is yet another case of having to pay for a player’s lesser years at the end in order to get the ones in his prime. His contract, along with Chris Kreider’s seven-year pact that kicked in last season, have “future buyout” written all over them.

The Rangers, though, can’t worry a bit about what either contract will look like in the latter half of this decade (and they aren’t). Zibanejad’s new pact represents the price of competing over the next several seasons, and the Rangers were more than happy to pay it – especially given the key discount that came with the long-term commitment to a player they simply couldn’t afford to let get away.

I’m a resident of the Chicago suburbs by way of White Plains, NY. I worked for the Associated Press sports department in New York City for 10 years before moving to Chicago in 2005, when the AP’s then-internet division entered into a joint venture with STATS LLC. I worked for STATS for 11 years, until 2016. Since then I’ve covered the Rangers for Elite Sports NY, a hyper-local website, writing long form features and news stories. I’m very excited to be a part of The Hockey Writers.