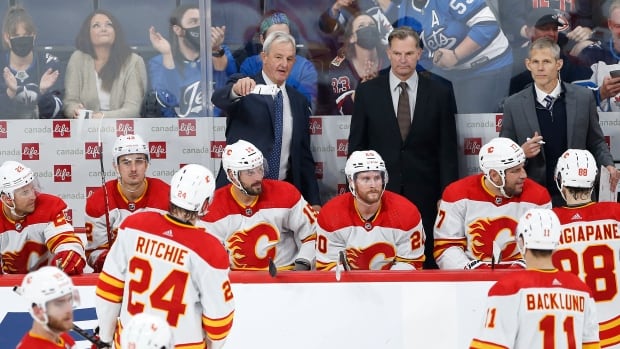 A significant change in leadership under new-ish head coach Darryl Sutter make the Calgary Flames a team in transition heading into the 2021-22 season.

“Honest, hardworking” is the identity Sutter wants for a club that either missed the playoffs or exited in the first round all but one season since Sutter coached the Flames to the Stanley Cup final 17 years ago.

A second-round appearance in 2015 is Calgary’s deepest post-season run since losing the Cup final in seven games to the Tampa Bay Lightning in 2004.

Calgary went 15-16-1 under Sutter to finish fifth in the North Division and four points out of a playoff spot. He’s the team’s third coach since 2019 following Ward and Bill Peters.

The Flames went 6-3 against the eventual Stanley Cup finalist Montreal Canadiens last season, but “we struggled against all the other teams,” goaltender Jacob Markstrom said.

Calgary opens this season Saturday in Edmonton against the Oilers before Monday’s home-opener with the Anaheim Ducks.

The Seattle Kraken plucking captain and top defenceman Mark Giordano in the summer’s expansion draft left a void in both leadership and quality back-end minutes.

For the first time in almost a quarter-century, the Flames opened training camp without a captain. Sutter wasn’t in a hurry to name Giordano’s replacement.

WATCH | 9 things you need to know for the NHL season in 90 seconds:

This edition of the Flames got a training camp in with the 63-year-old Sutter from Viking, Alta., who doesn’t filter his public comments when he’s displeased with a player or the team.

“As you guys know, he’s very black-and-white when it comes to what he wants out of you, which I think is great. It makes everything clear,” forward Milan Lucic said.

Sutter’s blunt assessment of the Flames to conclude last season was the team couldn’t execute at a pace the league demands.

A training camp of hard skates rectified that.

Tkachuk, Monahan, Johnny Gaudreau and Elias Lindholm producing seasons of 70-plus points, as they all did when the Flames topped the Western Conference in 2018-19, would help return Calgary to the NHL’s top tier of teams.

A healthy Monahan, who was plagued by hip problems most of last season and underwent off-season surgery, bodes well for Calgary’s offensive depth.

WATCH One question for every Canadian NHL team:

“We’re a group that can rely on different guys in different moments,” Lucic said. “We’re not always relying on one or two guys to do everything for us.”

Contract talk will swirl around Calgary’s top points producer for five of his seven NHL seasons. The 28-year-old left-winger is in the final season of six-year contract paying him an average of $6.75 million US annually. Gaudreau wished aloud during training camp for a more regular right-winger for himself and Monahan instead of a revolving door, although it’s likely Gaudreau will spend some time on a line with Lindholm and Tkachuk.

The 31-year-old goaltender posted decent numbers in his first (shortened) season in Calgary with a 22-19-2 record, a 2.68 goals-against average, a .904 save percentage and three shutouts. The Flames will need more than decent from the $6-million-a-year Swede for a long post-season run. If he stays healthy, Markstrom could surpass his previous season-high 60 starts. Add games he could play for Sweden at the Winter Olympics to his season workload too.