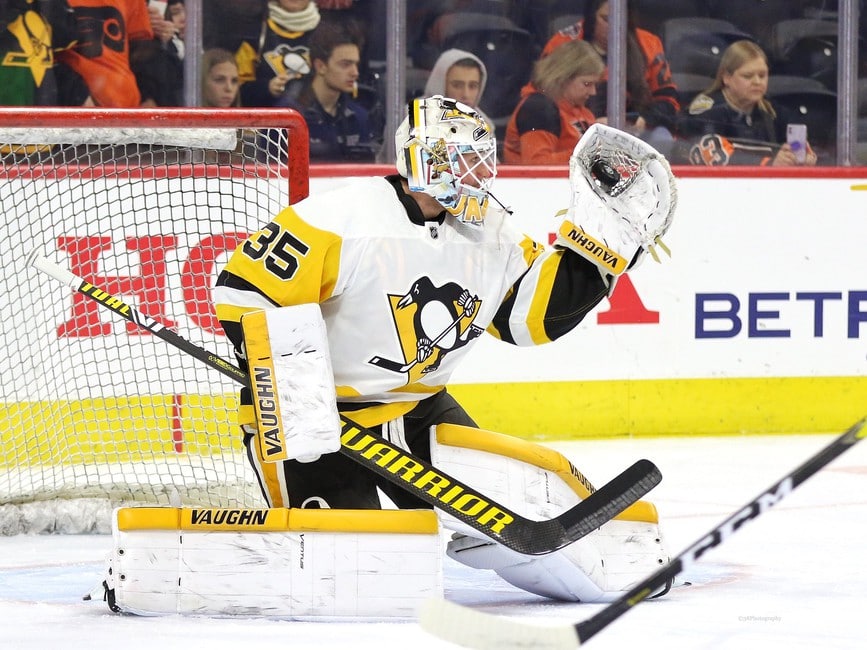 Without Crosby and Evgeni Malkin to begin the season, with the latter expected to miss the first few months of the season recovering from knee surgery, the Penguins are in unfamiliar territory starting the year without both of their stars. Last season’s first-round playoff exit, the questions around the performances of the goaltending, and the injuries to two future Hall of Fame players put the franchise in a pressure situation to get off to a good start in a competitive Metropolitan Division. Let’s look at some key aspects that are significant to a solid start to the year for the Penguins.

Can Jarry Be a Reliable Starting Goaltender?

Tristan Jarry is coming off a disappointing playoff series against the New York Islanders last season, and doubts have arisen about whether he can be the franchise goaltender for the Penguins. In six playoff games against the Islanders, he allowed 21 goals for a 3.18 goals-against average (GAA) and a .888 save percentage (SV%). His GAA and SV% in 39 regular-season games during 2020-21 were 2.75 and .909, respectively.

Related: Penguins, Jarry Falter in Game 1 Against the Islanders

According to Josh Yohe of The Athletic, he writes about the team’s hopes for success depending upon Jarry.

“’He understands his importance to this team,’ (Penguins head coach Mike) Sullivan said.” (From “The Penguins’ hopes on the shoulders of Tristian Jarry, who remains a mystery – by Josh Yote, The Athletic, 10/10/21).

In the piece, Yohe writes that Sullivan has encouraged Jarry to remain in the moment and not think about the past or future because his performance runs the risk of snowballing out of control. The article also noted that he has a different personality from former Penguins’ goaltender Marc-Andre Fleury, who does not hide his emotions. The current Penguins’ starting netminder has a quiet and reserved personality, which can be difficult for teammates and coaches to assess what he may be thinking because of how he communicates.

Going against an elite team in the Tampa Bay Lightning to open the season is quite a task for Jarry, as well as facing playmakers in Jonathan Huberdeau and Aleksander Barkov of the Florida Panthers in addition to Patrick Kane, Jonathan Toews and Alex DeBrincat of the Chicago Blackhawks. Backup goaltender Casey DeSmith may get a start against the Panthers or the Blackhawks, but none of the first three games are on back-to-back nights, so the Penguins’ number one goaltender may get the start in all of the games this week. Getting off to a good start this week would build Jarry’s confidence and help him further put his struggles behind him.

Players That Need to Fill the Void Without Crosby and Malkin

Another question for the Penguins is what the offense will look like on opening week without Crosby and Malkin. The former will likely miss at least the first two road games of the season but should return to the lineup shortly. In the meantime, the organization relied upon players such as Jeff Carter, Jason Zucker, Bryan Rust and Kasperi Kapanen during the preseason. All four players contributed offensively during the games each participated in during the exhibition part of the season.

Forward Jake Guentzel, who had been absent due to testing positive for COVID-19 on Oct. 3, returned to practice on Oct. 11. (From “Jake Guentzel returns to practice for the first time since COVID-19 diagnosis” – by Mike DeFabo, Pittsburgh Post-Gazette, 10/11/21). The article mentioned that Crosby and forward Zach Aston-Reese took part in their second consecutive practices as well.

Guentzel will be a welcome addition to a lineup depending upon Carter, Kapanen, Rust and Zucker for production. Zucker, in particular, is motivated to put his struggles last season behind him and would benefit from a good start offensively during the opening week of the season. Guentzel, who played in all 56 games last season and totaled 23 goals and 34 assists, only produced one goal and one assist in six games during the first-round playoff series against the Islanders. He needs to forget about his struggles last postseason and return to being the dependable forward who has proven he has the talent to play with Crosby on the top line.

The Penguins may be at a disadvantage to begin the season without their top two playmakers, but they have enough proven veterans and a head coach in Sullivan. He has motivated the franchise before, back when he first became the head coach during the 2015-16 season. The head coach managed to take a struggling team during that season and turn it into a Stanley Cup champion. The team believes it can remain a contender despite the competition in the Metropolitan Division or the questions the press and fanbase may hold about their roster. The Penguins have a tall task in front of them on Oct. 12 against the Lightning. Even though it is the first game of the season, the black and gold have the goal of beginning the season with a win over the defending Stanley Cup champion.

Matt covers the New York Rangers and has previously contributed content including news and rumors pieces about the Philadelphia Flyers and the Pittsburgh Penguins for The Hockey Writers. To see more of Matt’s writing, visit his portfolio. For interview requests, follow Matt on Twitter that appears at the end of his articles.