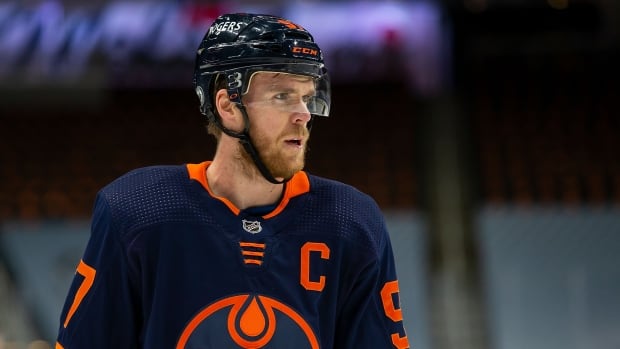 This is an excerpt from The Buzzer, which is CBC Sports’ daily email newsletter. Stay up to speed on what’s happening in sports by subscribing here.

On Saturday, all seven Canadian-based NHL teams will be in action on the same day for the first time this season. To mark this momentous occasion, let’s look at each team through the lens of an interesting player to follow in 2021-22:

Edmonton Oilers — Connor McDavid. Let’s start with the most obvious guy. McDavid is coming off a season for the ages. With 105 points in only 56 games, he won the Art Ross Trophy (his third) by an absurd 21 points (over teammate Leon Draisaitl) and averaged more points per game than anyone since Mario Lemieux back in 1995-96. With two MVP awards already on his mantle at age 24, McDavid is on a Gretzky-like track in terms of individual success. But, whereas the Great One had two Cups under his belt before the season in which he turned 25, McDavid has (through no fault of his own) won only one playoff series in his six years in the NHL. Knowing their superstar needs a better supporting cast, Edmonton signed hard-working former Leaf (and writer of children’s books) Zach Hyman, who should be good for 30 goals playing on McDavid’s wing. With Draisaitl and Ryan Nugent-Hopkins anchoring the second line, the Oilers have a dynamite top six. It’s up to everyone else to pull their weight, or else Edmonton could waste another brilliant performance by one of the all-time greats.

Toronto Maple Leafs — Auston Matthews. One of the most electrifying goal-scorers in the game, Matthews averaged 39.5 of them over his first four seasons and then went nuclear in 2021, potting 41 in only 52 games to win his first Rocket Richard Trophy. But he and the Leafs bombed in the playoffs again, with Matthews managing just one goal in a stunning seven-game opening-round upset loss to Montreal. The 24-year-old is still recovering from wrist surgery but should be back in the lineup soon. He can take his time, though, because no one really cares anymore what Toronto does in the regular season. If Matthews and his teammates don’t get this franchise past the opening round of the playoffs for the first time in the salary-cap era, Leaf fans will be howling for blood.

Calgary Flames — Johnny Gaudreau. This is a big year for the diminutive winger. Gaudreau can become an unrestricted free agent at season’s end, and the best way for him to cash in (with Calgary or another team) is to prove he’s still the guy who finished fourth in MVP voting three years ago. Gaudreau had 36 goals and 99 points that season, but he hasn’t been a point-per-game player since. A contract year might bring out the best in the 28-year-old, but it could also send him to the trading block if Calgary looks like it’ll miss the playoffs again.

Montreal Canadiens — Cole Caufield. With Carey Price on leave indefinitely and Shea Weber taking the season off to heal his injuries, the Habs are going to have a tough enough time getting into the playoffs — never mind matching their magical run to the Stanley Cup final. This season might be more about looking ahead, which is where Caufield comes in. Despite playing in the final 10 games of the 2021 regular season and 20 more in the playoffs, where he notched 12 points, the 20-year-old forward is still considered a rookie under NHL rules. A Calder Trophy-calibre season by Caufield and another good one by third-year forward Nick Suzuki could help Hab fans get through a potentially rough year that’s off to a bumpy start with losses to Toronto and tanking Buffalo.

Vancouver Canucks — Elias Pettersson. Last season was a nightmare for Vancouver, which finished last in the all-Canadian division after a crippling COVID-19 outbreak shut the team down for almost a month in late March/early April. Before that, Pettersson suffered a wrist injury that caused him to miss the final 30 games. He then sat out the start of training camp until the Canucks gave him (and fellow young cornerstone Quinn Hughes) a new contract. It’ll be largely up to those guys and Pettersson’s linemate Brock Boesser to decide how well the Canucks bounce back.

Ottawa Senators — Brady Tkachuk. The 22-year-old restricted free agent finally got his money ($57.5 million US over seven years) just hours before the season opener on Thursday. He missed that win over Toronto and it sounds like he’ll sit out Saturday night’s rematch too, but he could be back on the ice Sunday in Dallas. Tkachuk, who was the No. 4 overall pick in the 2018 draft, led Ottawa in points in each of the last two seasons — and the entire NHL in shots per 60 minutes in 2021 (though he buried only 17). Tkachuk also helped the Senators climb out of the bottom two in the league for the first time since 2016-17. A playoff spot still looks out of reach, but the Sens have a nice young core to build around in Tkachuk, teenage forward Tim Stützle (the No. 2 overall pick in 2020) and 24-year-old defenceman Thomas Chabot.

Winnipeg Jets — Connor Hellebuyck. The 28-year-old American won the Vezina Trophy two years ago and deserved to finish higher than fourth in the voting last season. He’s one of the best goalies in the world. But the Jets tend to lean on him too much — something they’ve tried to fix with the acquisition of defencemen Nate Schmidt and Brenden Dillon. A better season from Pierre-Luc Dubois would help too — he struggled after forcing his way out of Columbus and getting traded to Winnipeg for Patrik Laine in a swap of disgruntled forwards.

For more on the Canadian teams, watch CBC Sports’ Rob Pizzo tackle a burning question for each of them here:

This weekend on CBC Sports

Here’s what you can live-stream and watch on TV:

Hockey Night in Canada: It’s the first Saturday night of the season, and you can watch Ottawa vs. Toronto at 7 p.m. ET and Calgary vs. Edmonton at 10 p.m. ET on CBC TV, CBCSports.ca and the CBC Sports app.

You’re up to speed. Have a good weekend.