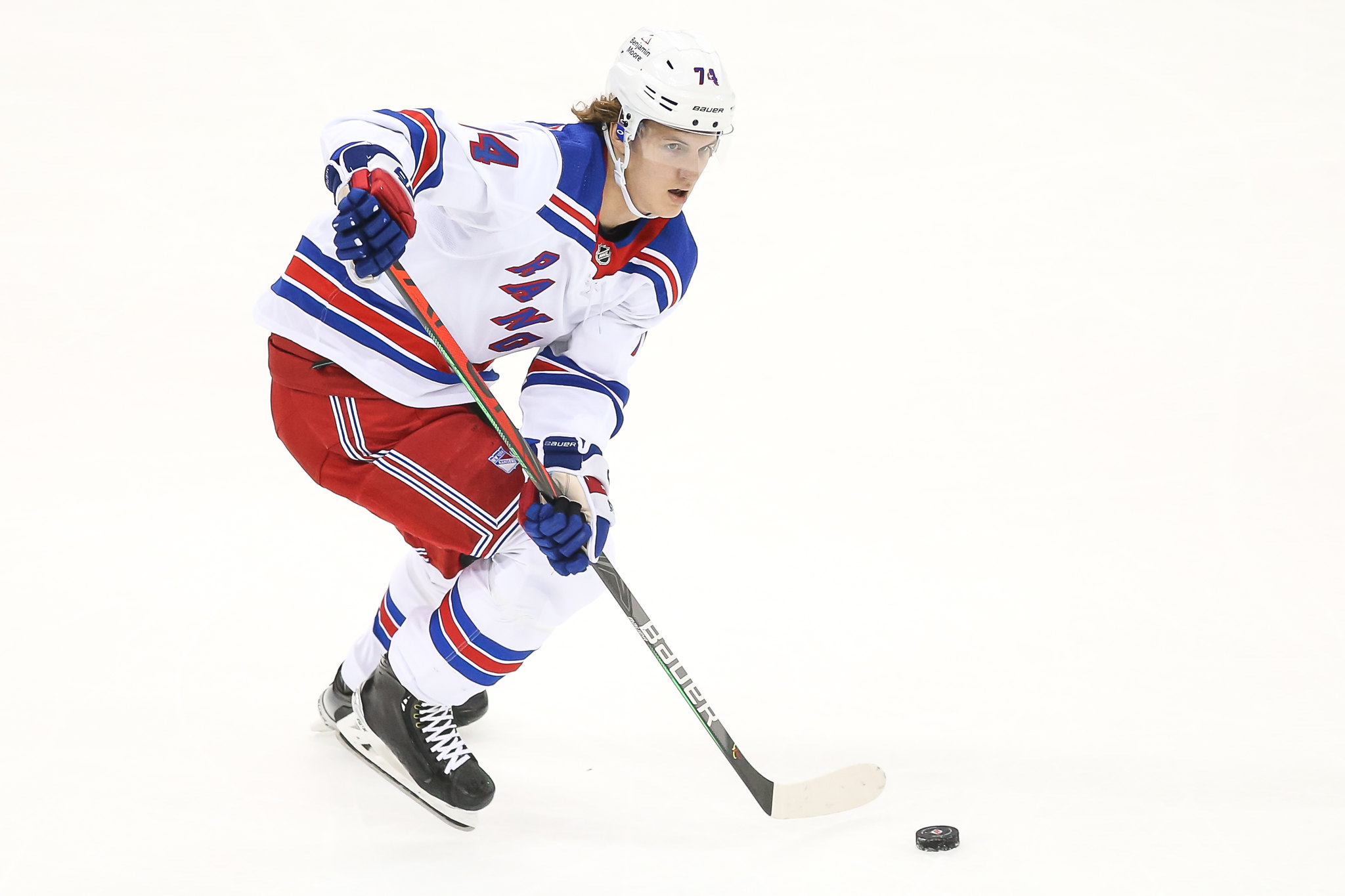 Vitali Kravtsov received Ryan Strome’s sublime cross-ice feed on the right side of the New York Islanders’ net and buried a blistering one-timer behind goaltender Ilya Sorokin for a power-play goal.

All looked right in the winger’s world then, the 21-year-old celebrating in the New York Rangers’ preseason finale against their archrivals with his teammates, exhibiting a boyish smile after flashing the elite offensive skills that his club thought would finally entrench him as part of its future core.

Less than one week later, the joy of that scene was a distant memory – making clear that the happiness Kravtsov showed was masking big issues below the surface.

Kravtsov, who had seemingly overcome major growing pains on a long and bumpy road away from Madison Square Garden, through Hartford, his native Russia, Hartford again and then finally back to New York, might have made that game his last one in a Blueshirt. In a telling response to failing to make the team out of camp this week, the ninth overall pick in the 2018 NHL Draft seems to have cemented the reality that a career in Rangers colors isn’t in the cards.

Kravtsov’s refusal of his assignment to the Rangers’ American Hockey League affiliate prompted the Blueshirts to suspend him. It also validated plenty of warning signs that he was a sullen and entitled player, expecting rather than earning a key role in the NHL and reacting unacceptably when his view of the situation didn’t square with reality. The Rangers have given Kravtsov permission to seek a trade, the surest sign they’re done with him.

Red Flags Have Followed Kravtsov Throughout His Time With Rangers

This of course marks the second time Kravtsov has pitched a fit after not making the roster out of training camp. There’s his well-documented saga of the 2019-20 season, when he was also a late cut. Rather than staying with the Hartford Wolf Pack to develop his game in North America, he exercised a European assignment clause to play in the Kontinental Hockey League, then was demoted from Traktor of that league to a remote minor league.

The Rangers brought him back to Hartford later that season, where he played well and sparked hope that his seeming immaturity was behind him; a strong 2020-21 season in the KHL and encouraging subsequent 20-game cameo with the Blueshirts appeared to further cement that belief. The events of this week, however, have proven all of that to be a mirage.

For it was also reported this week that Kravtsov underwent a contentious exit interview with team management at the end of last season, the Rangers taking issue with his offseason training methods. More significantly, Kravtsov expressed his belief during that session that he belonged on one of the top two lines, rather than the frequent spot on the fourth line he occupied after his late-season callup. (From ‘Rangers Could Trade Vitali Kravtsov With Tensions Rising Over Demotion’, New York Post, 9/12/21)

That Kravtsov believed he should supplant players who had been with the team all season and had earned their spots, based solely on his opinion of his own talent, spoke volumes.

“There was no reason why, it was about picking your team that you’re moving forward with, trying to win hockey games,” coach Gerard Gallant said of the decision to send Kravtsov down. “We said there was a battle for those spots all training camp long and the other guys played well, some of the guys that stayed up, (Julien) Gauthier and (Dryden) Hunt and those guys. They played really well in camp and they earned this position.”

That’s how it works in the NHL. And if this setback, one endured by young players every year in training camps, marks the end of his Rangers career, Kravtsov might be remembered as more of an exercise in missed opportunities than simply as a bust.

Rangers Took a Chance on Kravtsov in Draft and Got Burned

Eyebrows were raised at the 2018 draft when Jeff Gorton submitted Kravtsov’s name for the ninth overall pick, but the now-former general manager was confident he’d made the right choice: A lesser-known player who nonetheless possessed what Gorton thought was a higher ceiling than other prospects available at that spot.

While Wahlstrom hasn’t established himself as a star – yet – he might be on his way to strong NHL career. The 6-foot-2, 205-pounder recorded 12 goals and nine assists in 44 games for the Isles last season – and this potentially has the makings of yet another haunting personnel miss by the Rangers, given Wahlstrom’s comments to the effect that the Blueshirts were going to regret not selecting him.

It’s important to point out that Gorton’s reasoning in taking Kravtsov wasn’t necessarily flawed. Picking ninth, the ex-GM didn’t have access to the top-tier players in the draft who were gone by the time it was the Rangers’ turn. Seeing a chance to perhaps steal an overlooked elite talent with the first of his three first-round picks that year (the other two became K’Andre Miller and Nils Lundkvist), Gorton took a bold chance.

That kind of risk-taking – basing it on Kravtsov’s potential – shouldn’t be discouraged. Where the problem arose was in an apparent total lack of information when it came to the player’s mental makeup. That’s now officially a disturbing trend for the organization, given that the Rangers’ 2017 top-10 draft pick, Lias Andersson, authored a story similar to Kravtsov’s.

While not a top priority for current GM Chris Drury, investigating the seemingly failed process used to make those two high draft picks should be on the to-do list, in order to avoid a repeat of the situation. In the meantime, Drury and the front office have to be hoping Wahlstrom doesn’t turn into a dangerous sniper that they’ll face multiple times each season.

If choosing Kravtsov over Wahlstrom turns out to be a painful missed chance, the Rangers might also be guilty of passing on the opportunity to move Kravtsov while his value was considerably higher than it is now. The troublesome exit interview of last summer wasn’t known about through the league at the time, and other teams saw an intriguing young player who had trended upward in the KHL, AHL and NHL upon his late-season promotion to the Rangers.

Given the issues with Kravtsov – which, again, only Rangers management were aware of then – it seems as if the club should have been proactive in attempting to move him before the situation got worse and those problems were exposed. There’s no indication Gorton attempted to do that – and the situation, perhaps predictably, did get worse.

Whatever the Rangers are able to get for Kravtsov now probably isn’t going to be comparable to what they might have procured last summer. Gorton does deserve kudos for an amazing recovery from the Andersson debacle, somehow shipping him to the Los Angeles Kings for a 2020 second-round pick that he used on promising power forward Will Cuylle, who looks like he might have a future on Broadway. Yet Gorton has saddled his successor with a similar challenge.

If Drury is able to procure the same return for Kravtsov as Gorton did for Andersson, the current GM should pat himself on the back. It’s of course possible that Drury could do even better, as Kravtsov’s potential is considerably more abundant than Andersson’s and there’s said to be interest surrounding Kravtsov on the trade market.

Drury has drawn mostly positive reviews for his moves in his short tenure in charge of the team’s personnel operations. Whatever he does here needs to be carefully thought through, as he’d be sending away a talented player who still has the potential to blossom elsewhere with the proverbial “fresh start.”

Because the last thing the Rangers need is to complete an unwanted hat trick – a third time they took the wrong path regarding a confounding player who’s already evoked plenty of second-guessing with the organization that drafted him – and who still retains the potential to make that organization really regret its draft decision of three years ago.

I’m a resident of the Chicago suburbs by way of White Plains, NY. I worked for the Associated Press sports department in New York City for 10 years before moving to Chicago in 2005, when the AP’s then-internet division entered into a joint venture with STATS LLC. I worked for STATS for 11 years, until 2016. Since then I’ve covered the Rangers for Elite Sports NY, a hyper-local website, writing long form features and news stories. I’m very excited to be a part of The Hockey Writers.