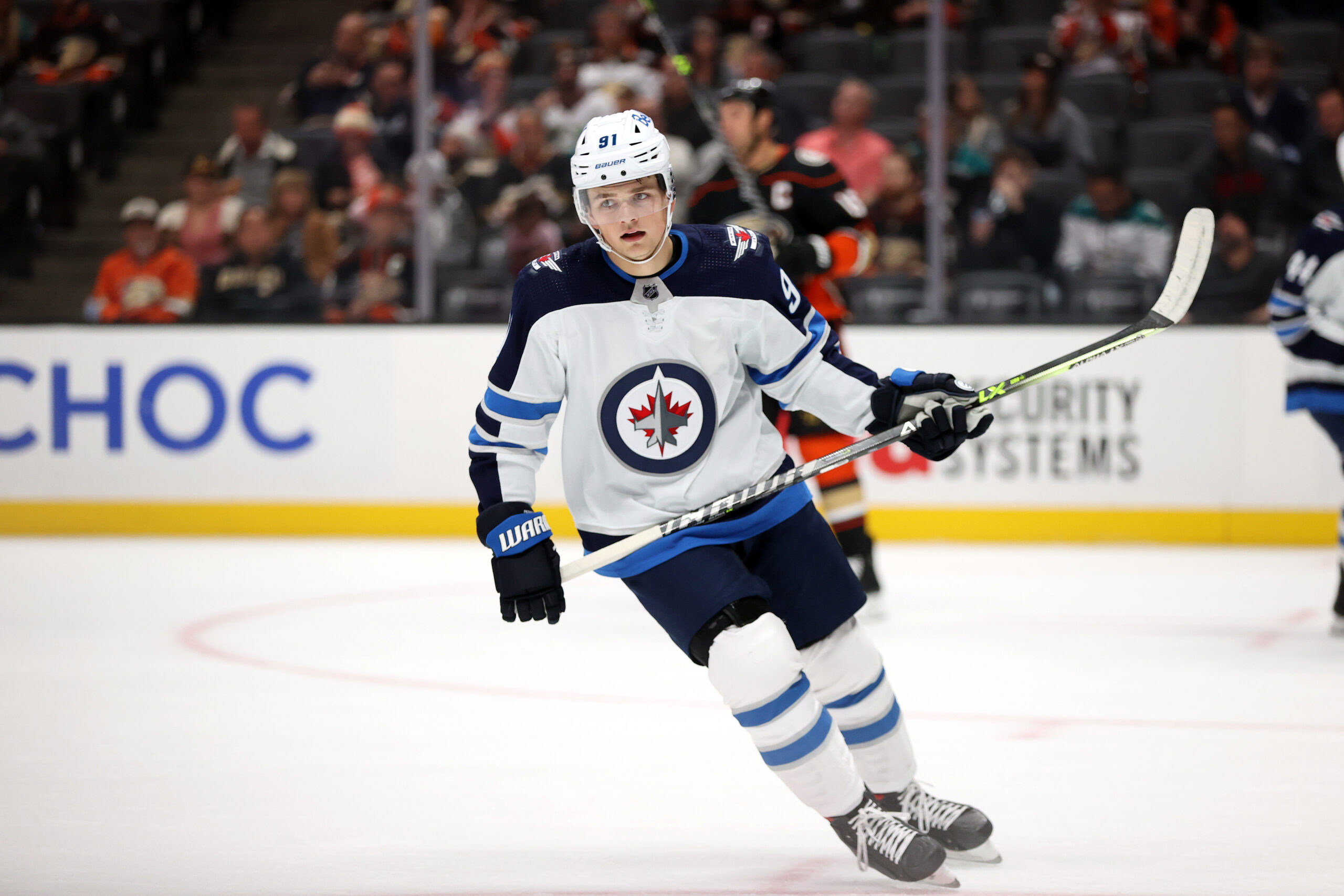 While his NHL debut was somewhat unexpected, Winnipeg Jets’ top prospect Cole Perfetti made it count with a solid performance against the Anaheim Ducks on Wednesday.

Perfetti’s Debut a Bright Spot in Disappointing Game Against Ducks

Perfetti, who was only told on Tuesday he’d be in the lineup, skated on the third line right wing, with Adam Lowry and Jansen Harkins.

While he didn’t register any points or shots — and the Jets lost 4-1— the 2020 10th overall selection skated 9:49 and was engaged throughout. He had a total of 14 shifts and even saw time on the power play, subbing for Pierre-Luc Dubois on unit 1 in the second period when Dubois was in the box for roughing.

He was competitive and made some smooth plays with the puck; defenseman Josh Morrissey described Perfetti as making “veteran-style plays” along the boards and at the blue line, high praise for a player who is only 19 years old.

Making his debut even more special was that his parents got to witness it live.

Pefetti informed his folks Angelo and Sandra Perfetti on Tuesday afternoon that he’d be in the lineup Wednesday and to get down to Anaheim. The couple, living in Whitby, Ont., arranged rapid COVID-19 tests, booked flights, then drove to Toronto early Wednesday to catch their plane out. But a long delay at customs nearly caused them to miss their son’s big day.

“Fortunately, they got a huge assist from a rather hilarious source,” the Free Press’ Mike McIntyre wrote. “Fellow Ontarian Gary Drysdale was already boarded on the same flight, heading to southern California for the exact same reason. His 19-year-old son, Jamie (Drysdale), was about to start his second season as a Ducks defenceman.”

Drysdale held the plane for the Perfettis, and they touched down by mid-afternoon, making it to the Honda Center in time for the warmup and to see their son take the rite-of-passage solo lap.

“I Like a Whole Lot of His Game,” Says Jets Bench Boss

“I like a whole lot of his game,” head coach Paul Maurice said after the game.

“He competes on pucks, he makes good plays with pucks… It’s not whether he’s good enough. It’s whether it makes the most sense, right? Because he does a lot of really good things as well. What does it do to that line? His game is good. He plays a good hockey game.”

Perfetti’s Debut Didn’t Quite Match the His Childhood Dreams

“It’s a dream come true, but at the same time you’re a little nervious, jut trying not to do anything that will make TSN or something like that, so it was something I’ll never forget,” Perfetti said postgame of his solo skate.

While he admitted his childhood dreams of his NHL debut were a little loftier, he was also happy that his hard work finally culminated in making “The Show.”

“It’s a little different than how you dream of it as a kid, you dream of scoring the game-winning goal or scoring your first goal and winning,” he said before pausing to collect his thoughts.

Perfetti May Have to Wait a While for Next NHL Game

Perfetti was in the lineup because Mark Scheifele was unavailable, serving the final game of the harsh four-game ban he recieved in last June’s second-round playoff series against the Montreal Canadiens for charging Jake Evans.

With Scheifele returning to the lineup Saturday night in San Jose, Paul Stastny will be bumped from top-line centre — where he played in Scheifele’s stead on Wednesday — to the third line. This may push Perfetti out of the lineup, but we’ll find out more during the Jets’ Friday morning skate.

While he seems destined to play primarily with the Manitoba Moose — where he’ll be able to play big minutes and a starring role — Perfetti is already ahead of schedule. He benefitted greatly from playing in AHL last season and made the most of the opportunity the OHL season shutdown presented him to learn how to conduct himself as a professional and how to compete against grown men.

Related: Jets Can Afford to Take Time With Cole Perfetti

While the Jets, a deep team, don’t have to rush him, they should have no problem inserting him into their lineup again if and when needed.