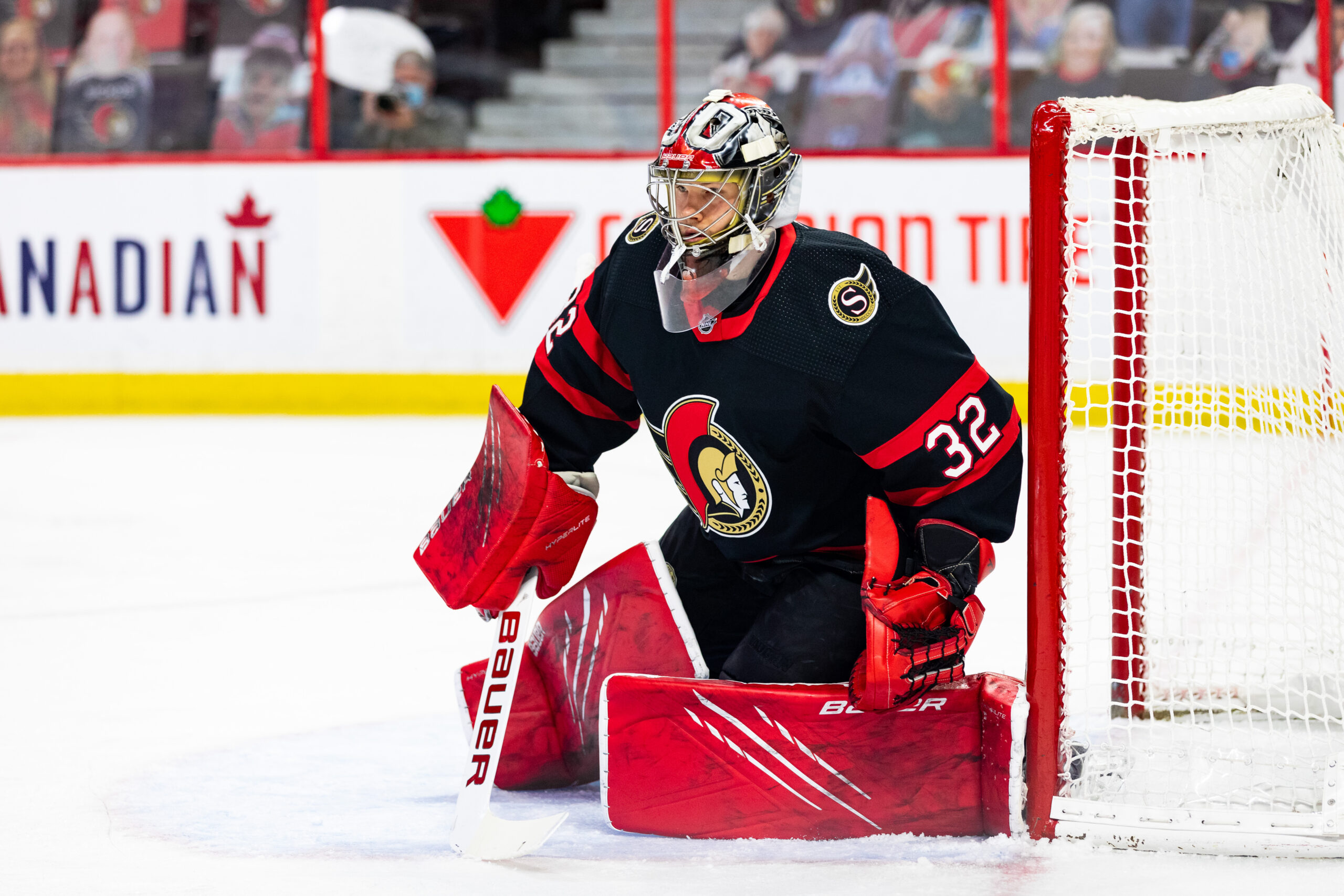 For the first time in a long time, the Ottawa Senators are starting the season with the hope that they will end with a winning record. Brady Tkachuk is signed long-term, the team is getting scoring from nearly every line, and Chris Tierney has shaken off his 2020-21 slump and even leads the team in scoring with three goals. Even the defense has improved with the additions of Nick Holden and Michael Del Zotto. But the one thing that has cast a shadow over the optimism is the goaltending. Matt Murray, after looking solid in the preseason, has missed the team’s first three games, forcing Ottawa to rely on Anton Forsberg and Filip Gustavsson to man the crease.

Of course, this hasn’t been a problem for the Senators. Forsberg proved himself to be a solid backup goalie last season, posting a 0.909 save percentage (SV%) over eight games, and was able to stabilize the crease when Murray and Joey Daccord both went down with injuries. However, the team knows that he’s not a long-term solution. At 28 years old, it’s unlikely he improves much on his career 0.904 SV%, but it’s also unlikely he falls below his current numbers. He’s exactly what you want in a backup — consistent.

Gustavsson, on the other hand, stole the show last season when he started his NHL career with two wins in his first two starts and finished with a 0.933 SV% over nine games. He was set to start the season in the AHL, but Murray’s recent illness brought him back up, and in his only start thus far, he stopped 32 of 34 shots. The 23-year-old is only going to get better, with most of his career ahead of him. With Murray starting to show signs that this could be a repeat of 2020-21, the Senators should bite the bullet and make Gustavsson their starter.

The biggest reason why the Senators wouldn’t make Gustavsson their number one goalie is his lack of experience. As of Oct. 19, he’s only played 10 games in his NHL career. However, in each of those 10 games, he’s been one of Ottawa’s best goalies. Only twice has his SV% been less than 0.900, and only one of those outings was in a game he started. Of the eight remaining games, he faced less than 30 shots just three times, and posted a SV% below 0.920 just once.

Some may argue that his numbers may have been inflated or that he was getting a light load, but the advanced stats don’t back that up. Last season, the Senators’ defence was, to put it nicely, sub-par. They ranked 10th in the league in high danger shots faced per 60 minutes (7.88) and 13th in medium danger shots per 60 minutes. That means they consistently allowed good scoring chances from their opponents, and the team’s save percentage reflected that, ranking third-last in the NHL at .895. So, when compared to Gustavsson’s numbers, his performance was all that more impressive.

Now, the criticism still remains that these 10 games could be an anomaly. In the AHL, Gustavsson hasn’t had a great record. In 75 games from 2017-2021, he had just a 0.894 SV%. Some of that falls on consistency issues early in his North American career; in both 2018-19 and 2019-20, he had to split starts with Daccord and Marcus Hogberg, which hurt all three goalie’s stat lines. But in Feb 2020, he was named AHL Goaltender of the Month after posting a 4-0-1 record, one shutout, and a 0.942 SV%. Soon after, he was called up to the Senators and was equally dominant in the NHL. Rather than an anomaly, it seems he’s just hitting his stride.

Murray’s Pedigree vs. His Recent Performance

Unlike Gustavsson, Murray has struggled immensely since joining the Senators organization. In his first season, he was handed the starting position without much opposition, and he got off to a rough start that didn’t improve all that much as 2020-21 progressed. Injuries, inconsistency, and a lack of confidence led to him posting a 3-9-1 in his first 15 games and a .883 SV%. He was pulled three times in that stretch, including one night where he allowed three goals on nine shots. The team began to find their groove after that, but Murray remained inconsistent, posting a .905 SV% in the final 12 games despite recording two shutouts.

Unfortunately, this wasn’t all that surprising based on his numbers in Pittsburgh. After leading the Penguins to back-to-back Stanley Cups in 2016 and 2017, his save percentage began to drop to the low .900s after being consistently in the .920 to .935 range. That drop was, in part, due to the departure of his former goaltending partner Marc-Andre Fleury, who the Vegas Golden Knights selected in the 2017 expansion draft. The Penguins saw Murray, who had proven to be an excellent playoff goalie, as their option for the future, so they let their other aging netminder go.

Yet without Fleury, Murray just wasn’t the same. In 2019-20, he was one of the worst starting goalies in the NHL, posting a .899 SV% over 38 games. That allowed up-and-comer Tristan Jarry to jump him in the depth chart, which was the beginning of the end of his time in Pittsburgh. At the 2020 NHL Draft, the Penguins traded him to the Senators for a second-round pick and prospect Jon Gruden, a much lower price than many thought a two-time Stanley Cup-winning goalie would demand. But recent performances had marred his reputation, allowing Ottawa to grab him on the cheap and then sign him to a four-year deal with an annual cap hit of $6.25 million.

With a cap hit that high, the Senators can’t afford to have Murray as their backup, and they’ve taken steps in order to give him a boost in confidence, including hiring a new goalie coach. But his effectiveness while alongside Fleury can’t be ignored. There is something to be said of having two talented goalies that push each other rather than forcing one to play the majority of the season. Just look at Fleury’s record with the Golden Knights; working together with Robin Lehner, he ended the 2020-21 season with one of the best save percentages and lowest goals against average.

At this point, Murray is no longer the Senators’ best goalie. Each passing game makes 2017 feel so long ago and that he is much older than his 27 years. Gustavsson is also clearly the team’s future starting goaltender and ready to take over a larger body of work, but with Forsberg on a one-way deal, Ottawa doesn’t want to risk losing him to waivers if they send him down. But if they want to be more competitive, the team will have to make some tough calls, and making Gustavsson a full-time member of the Senators should be one of the first.

Having consistent goaltending is crucial to any teams’ success. Cheryl Pounder said on TSN after Gustavsson’s first start in the 2021-22 season, “It’s remarkable how much goaltending can do for your team and the confidence it can give you. In particular, when you face five to eight-minute stretches in a game where you need a goaltender to come up big and really set the tone and change the momentum in the game, and that is exactly what Gustavsson did.”

But rather than throwing Gustavsson to the wolves, so to say, the Senators should take some notes from Murray’s career and employ a tandem situation, much like the Penguins did when they won the Stanley Cup. That way, Murray can avoid injury from being overworked, and Gustavsson can get the playing time he deserves. That, unfortunately, leaves Forsberg as the odd man out, but even if they lose him on waivers, it’s not a huge loss, as Ottawa has several young goalies in the minors who are fighting for an eventual call-up. Danish giant Mads Sogaard promises to be a future NHL starter, and Leevi Merilainen has shown immense promise.

Making a championship team requires bold moves. Keeping Murray as the team’s starter while another goalie outperforms him is the safe choice and will likely cost the Senators valuable wins towards a playoff push. Giving Gustavsson the reigns, even for a short period of time, will let the team see what they really have in their goaltender of the future and potentially give them a much more stable crease.