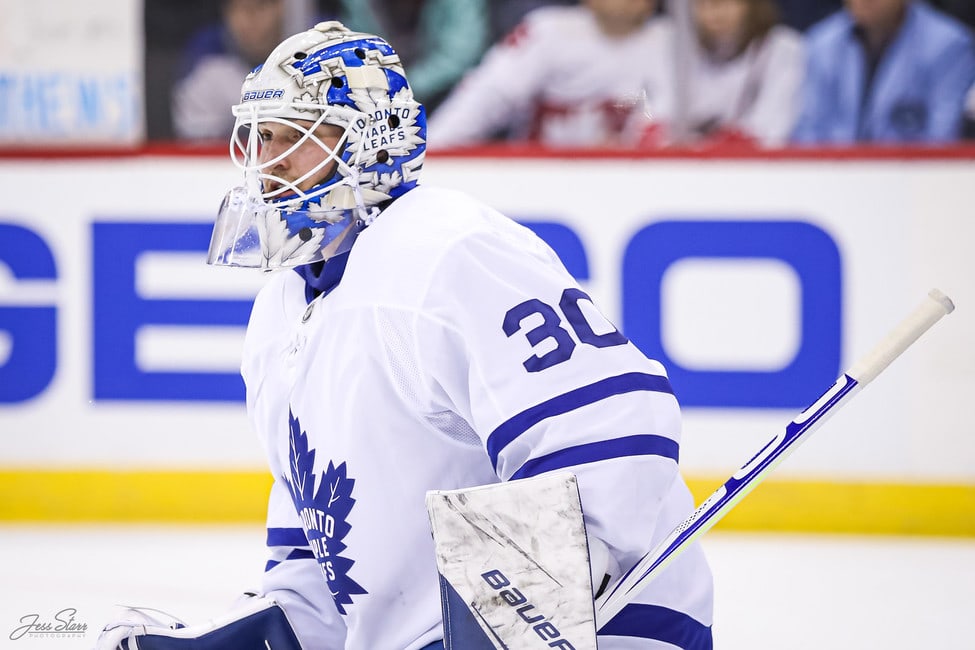 In this edition of Toronto Maple Leafs’ News & Rumors, I’ll take a look at some of the injury reports from the team. The good news is that goalie 1B Peter Mrazek is back skating and will make the road trip with the team.

Second, I’ll share the news that, unlike his predecessor Mike Babcock, Maple Leafs’ head coach Sheldon Keefe has a different idea about how he should deploy his starting and backup goalies during back-to-back games. Specifically, the report is that Michael Hutchinson will start tonight’s game against the San Jose Sharks. Then, tomorrow night starter Jack Campbell will be in the net against a well-rested but injured Pittsburgh Penguins’ team when the Maple Leafs go out on the road.

Finally, Ondrej Kase is back skating and looks like he might be ready for game action. Finally, I’ll comment about Mitch Marner’s slow start on the season and hope his on-ice life will change with his long-time partner Auston Matthews now back on the ice.

Item One: Petr Mrazek Heading Out on the Road with the Maple Leafs

In some very good news, Petr Mrazek is skating and will be joining Maple Leafs on the team’s upcoming road trip. It looks as if Mrazek’s groin injury is sufficiently healed to allow him to travel with his teammates on the three-game road trip that begins on Saturday in Pittsburgh.

Mrazek has recovered more quickly than expected from the groin injury he suffered on October 14. The initial prognosis was that that injury would sideline him for at least two weeks. However, unless setbacks occur, Mrazek will likely start one of the three games before next Wednesday. That’s really good news for the team.

Item Two: Jack Campbell Gets the Call Against the Penguins

Perhaps it’s a bit surprising given the traditional wisdom that, when back-to-back games come, coaches give their backup goalies the harder of the games to play. Before the 2021-22 regular season began, on paper, tonight’s game against the Sharks would have looked to be the easier of the two games. The Maple Leafs are rested, and the Sharks are not. Smart money would have said that, if the Maple Leafs were to win one of those two games, tonight’s game would be the one to bet on.

However, Keefe decided differently. Instead of using starter Jack Campbell tonight, Campbell will be in the net for Saturday’s game against the Penguins. Campbell has a 2-0-1 record this season with a goals-against-average of 1.18 and a save percentage of .953  in four games. Campbell’s looked good all season long.

Even during the overtime loss to the New York Rangers. Campbell wasn’t super busy; however, when he was called upon he made most of the saves he needed to – except the one in overtime. Still, he can’t be blamed for that loss.

Perhaps Keefe also looked at the situation and decided to start the 29-year-old Campbell against a Penguins team that is, itself, more than a bit banged up. The Penguins will be without its leader Sidney Crosby who, like Auston Matthews, is out after wrist surgery. Evgeni Malkin is out with a knee injury, and Bryan Rust has an undisclosed injury. Finally, both forward Jeff Carter and goalie Tristan Jarry are under COVID-19 protocols).

Keefe decided to start Michael Hutchinson against San Jose in tonight’s home game versus the Sharks. It will be Hutchinson’s regular-season start. The 31-year-old goalie was solid almost every time he played last season, posting a 4-2-1 record with a goals-against-average of  2.42 and a save percentage of .919 in limited action. He’ll try to beat a surprising Sharks’ team that’s started the season with a 3-0-0 record and has scored 11 goals in the process. The Sharks beat the Senators last night in Ottawa by a 2-1 score.

Hutchinson joined the Leafs on an emergency basis on Saturday after Petr Mrazek was injured. With Mrazek headed out on the road with the team, it’s likely Hutchinson just stays in Toronto and returns to the Marlies.

Ondrej Kase was injured blocking a shot with his foot during Monday’s Rangers’ game and then missed Tuesday’s practice. Obviously, the tests showed no serious complications and he was back on the ice for Thursday’s practice skating with line partners David Kampf and Alex Kerfoot.

As noted, the Maple Leafs take the ice tonight against the Sharks. One trio to watch will be first-liners Mitch Marner, Nick Ritchie, and Matthews. Marner and Ritchie have both gotten off to slow starts. In fact, Marner has scored only a single assist in four games. However, coach Keefe notes that he hasn’t seen any frustration setting in.

Specifically, Keefe noted “I think he’s feeling good, and I think he’s done a lot of good things. He and Auston picked up where they left off (in an overtime loss to the Rangers on Monday). Obviously, it didn’t go in for them, but I think the chemistry they have is there.” (from “Mitch Marner is off to a slow start but the Maple Leafs aren’t worried about him,” Mark Zwolinski, Toronto Star, 20/10/21).

Keefe added, “With Mitch, there’s an attention to production, he was one of the top scorers in the league last year, and he’s consistently been that, too. He also does a lot of good things for us without the puck. I’m not worried about the offensive side, it’s going to come.”

It would be great to see this trio perform well.

One game at a time, Wolves stay focused on the moment
Avs favorites to lift Stanley Cup again in 2023
Islanders Should Consider Anderson Trade with Canadiens for Right Price
Wolves’ Lyon suspended for two games
3 Kraken Targets with 61st-Overall Pick of 2022 NHL Draft