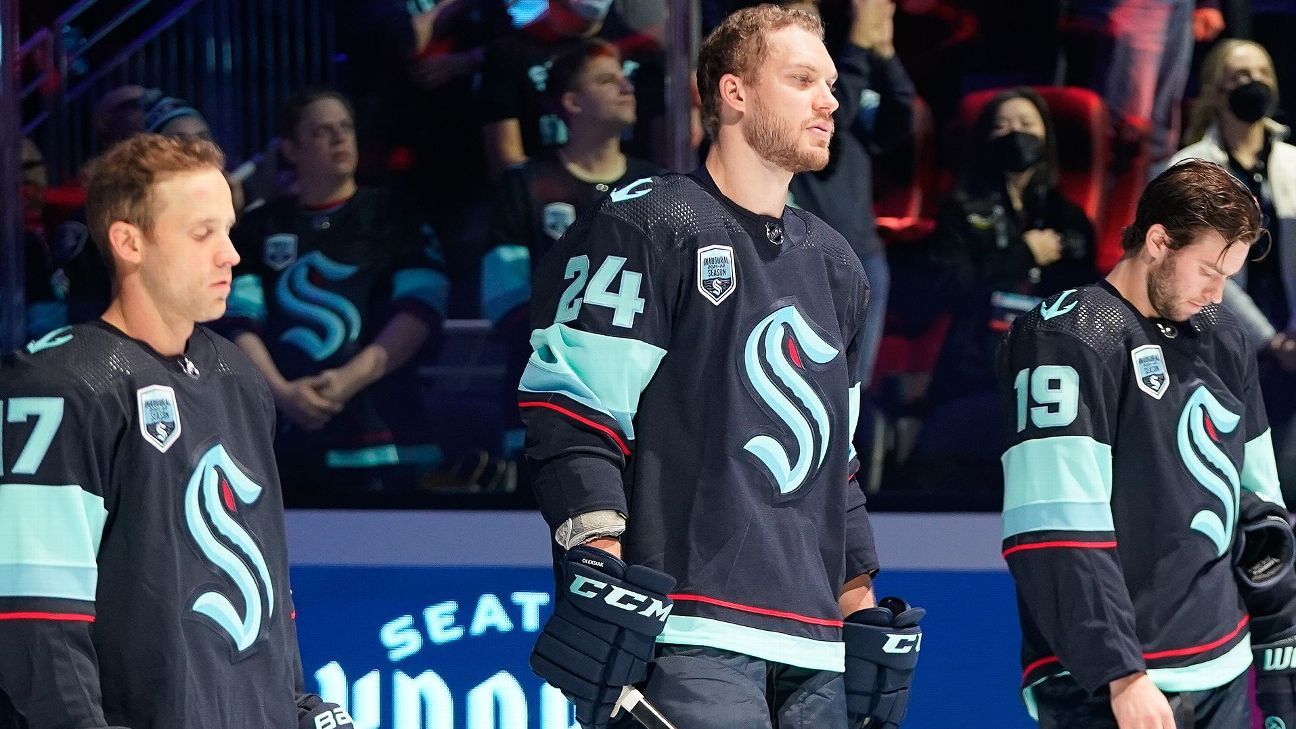 SEATTLE — The day started with Hockey Hall of Famer Cammi Granato on top of the iconic Space Needle raising a deep blue flag with the tentacle shaped ‘S’ flying over the city, hours before puck drop.

And from there, Seattle only became more awash in everything Kraken on Saturday in celebration of the home opener against the Vancouver Canucks.

Planes flew over the city pulling banners. The statues of Ken Griffey Jr. outside T-Mobile Park and Rachel the Pig at Pike Place Market were glad in Kraken gear. It was a buzz three years in the making since the franchise was awarded by the NHL in late 2018.

The Lower Queen Anne neighborhood of Seattle that once filled with NBA fans on game nights more than a decade ago were crammed with Kraken sweaters and hours before puck drop. Bars were packed. Beers were being enjoyed and the Emerald City was ready for the debut of the NHL.

“Based on my walking the streets of Seattle all day today, seeing everybody dressed in Kraken gear, the buzzer that’s in the air walking around this amazing building,” NHL Commissioner Gary Bettman said. “This is a great night, not just for Seattle or the Kraken. It’s a great night for the NHL.”

The 32nd franchise started with five road games before its home opener under the roof of Climate Pledge Arena against the Canucks, a team that — given its regional ties — will most likely become Seattle’s most primary rival.

And before the first puck drop, Seattle CEO Tod Leiweke announced the No. 32 was being retired by the franchise in honor of the 32,000 season ticket depositors that helped make the Kraken a reality.

It was the first time an NHL team went head-to-head against a Seattle-based club in the city since the 1919 Stanley Cup Final when Montreal faced the Seattle Metropolitans in a series cut short by the influenza epidemic.

By the time Kraken players hit the ice for pregame warmups at 6:30 p.m., the majority of fans were already in their seats getting their first look at their team in person. There were fans outside the arena looking into the building through the windows on the north end.

It was less than 12 hours earlier that Kraken players skated on the arena ice for the first time. The arena opened its doors this week with a pair of concerts that kept the ice covered up until just a handful of hours before the first puck drop.

“Tonight’s different just being at home for the first time in front of our crowd here in Seattle. I think being excited is a good thing having energy is a good thing you just have to use it in the right ways,” Seattle captain Mark Giordano said.

The pregame production to bring Seattle into the league didn’t match the spectacle of what Vegas brought to the league in 2017. But there are some decidedly Seattle aspects to the game presentation, from the use of an old Washington State Ferries horn when goals are scored to Nirvana’s track “Lithium” as the Kraken goal song, for now.

“A place like Columbus you have to prepare yourself because the cannon goes off an it scares the hell out of you,” Seattle coach Dave Hakstol joked. “You use the word unique and that’s the feel to this building in every way. This is a really unique building.”

Also in game, was another local musical tie-in when penalties are called against the road team. When the Kraken are about to begin a power play, and an opponent is sent to the penalty box, a few seconds of the 1991 song “Man in the Box,” by Seattle-based Alice in Chains echoed through the arena.