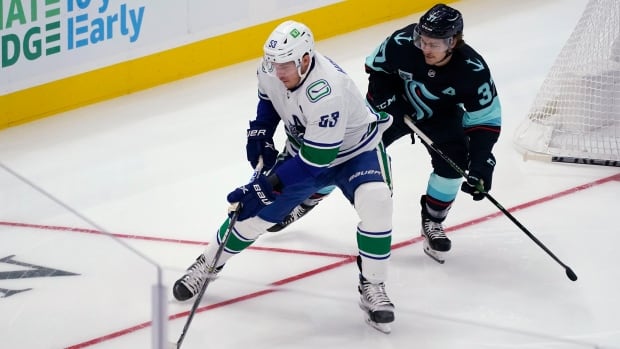 Bo Horvat scored his second goal of the game on a power play with 7:08 remaining, and Conor Garland scored on a breakaway three minutes later as the Vancouver Canucks spoiled the home debut of the Seattle Kraken with a 4-2 win on Saturday night.

Garland assisted on Horvat’s first goal in the second period, and then scored his third of the season to cap Vancouver’s comeback and ruin a celebratory night with the Kraken playing their first home game in their new $1 billion arena.

Justin Dowling added an empty-net goal for Vancouver in the final moments that sent disappointed Seattle fans to the exits, and capped a successful six-game road trip for the Canucks (3-2-1) to begin the season.

Vince Dunn scored the first goal in Climate Pledge Arena in the closing seconds of the first period, and Mark Giordano gave Seattle a 2-1 lead with his first goal of the season early in the third period. But Seattle couldn’t hold a third-period lead for the second time in its six games.

Conor Garland scored a late go-ahead goal to pave the way for Vancouver’s 4-2 win against Seattle. The contest was the expansion team’s first regular season home game in franchise history. 1:01

Thatcher Demko was excellent in goal for Vancouver with 29 saves. He kept the Canucks in the game in the second period when Seattle controlled most of the action but was unable to score.

Philipp Grubauer made 22 saves for Seattle.

Opening night under the roof of the reconstructed billion-dollar arena was three years in the making, but even longer for sports fans in the Seattle region who have desperately waited for a winter sports team to return after the departure of the SuperSonics.

Fans were lined up outside Climate Pledge Arena hours before the puck drop and most were in their seats before the Kraken took the ice for warmups. Most were in Kraken jerseys, although a few Canucks fans made their way inside the building for the first matchup of a budding Pacific Northwest rivalry.

Those in Seattle blue had to wait for the final seconds of the first period to finally erupt.

After an extended stretch of possession in the Vancouver zone, the puck was cycled to Dunn. With the period about to end, Dunn flicked a wrist shot past Demko with 4.6 seconds left for the first goal in the new building.

But Demko was not interested in letting the night become one big party for Seattle. Demko was terrific in the second period, especially a sequence late in the period denying Calle Jarnkrok, and barely 60 seconds later stopping Mason Appleton on a breakaway, reaching behind to keep the shot from trickling over the goal line.