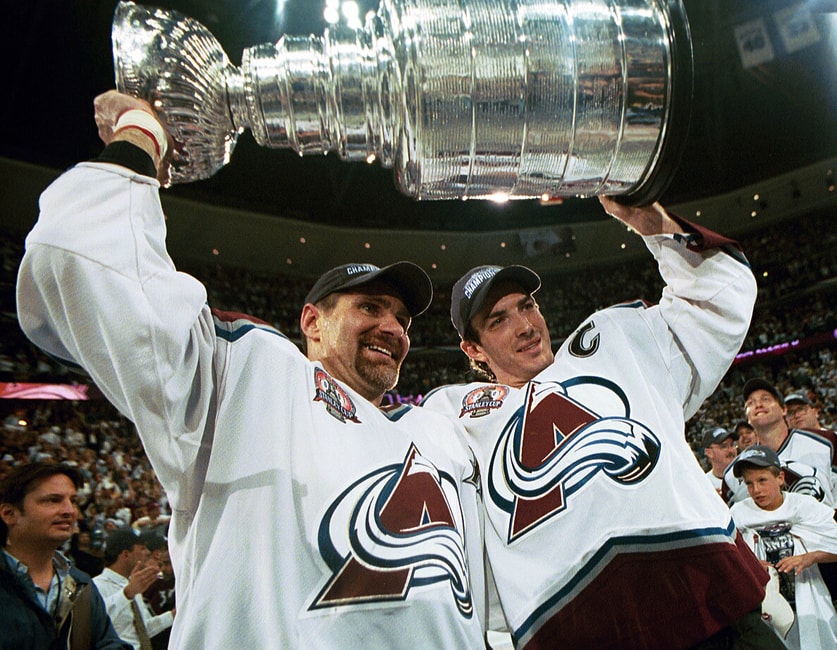 On this date, the National Hockey League’s highest-scoring defenseman ever took his place at the top of the list. Also, the “Original Six” franchises have been very active. So, let’s hop aboard the THW time machine to go back through the decades and relive all the great moments from Oct. 25.

Ray Bourque made NHL history on Oct. 25, 2000, as he picked up two assists in the Colorado Avalanche’s 2-1 win over the Nashville Predators. The two helpers gave him 1,532 points in his career, which broke Paul Coffey’s record for the most points by a defenseman.

Bourque finished the 2000-01 regular season with seven goals and 59 points. He added four goals and 10 points in the Avalanches’ run to the Stanley Cup before retiring as a champion after 22 seasons in the league. He is still the NHL’s all-time leading scorer for a defenseman with 1,579 points. His record appears to be safe for some time as the highest-scoring active blueliner is Brent Burns, who has 726 points.

Big Date for the Bruins

While Bourque set his scoring record with the Avalanche, the first 1,518 games of his career were spent with the Boston Bruins, who had plenty of memorable moments on this day over the years.

The Bruins purchased the contract of Hall of Famer Cy Denneny from the Ottawa Senators on Oct. 25, 1928, and named him player/coach for the 1928-29 season. He only played in 23 games, scoring a goal and three points. The team went 11-27-10 in Denneny’s only season behind an NHL bench.

On Oct. 25, 1952, goaltender Jim Henry recorded his 12th career shutout to lead the Bruins to a 4-0 win at the Toronto Maple Leafs. Joe Klukay led the offense scoring two goals against his former team. Henry finished his career with 28 shutouts, with 24 coming during his four seasons in Boston.

One year later, on Oct. 25, 1970, Eddie Johnston became the third goaltender in franchise history to record 100 wins. The milestone came in a 4-3 win over the visiting Philadelphia Flyers.

On Oct. 25, 1992, goalie Reggie Lemelin picked up a win in his 500th NHL game, a 5-3 victory at the Vancouver Canucks. He played in six more games during the 1992-93 season before retiring. He played in 183 games for the Bruins after 323 contests with the Flames in Atlanta and Calgary.

The Bruins fired Pat Burns on Oct. 25, 2000, and named Mike Keenan their new head coach, the 23rd in team history.

Ed Litzenberger scored a pair of goals and added two assists on Oct. 24, 1960, to lead the Chicago Blackhawks to an 8-4 win over the Montreal Canadiens.

On Oct. 25, 1964, Bobby Hull scored his 12th career hat trick as the Blackhawks beat the New York Rangers 5-2 at the Chicago Stadium.

This was a huge date for Hall of Fame goaltender Tony Esposito. On Oct. 25, 1969, he faced the Canadiens, his former team, for the first time. He made 30 saves to earn the first of 15 shutouts in the 1969-70 season, which is still an NHL record for the most by a netminder in his rookie season.

One year later, on Oct. 25, 1970, Esposito recorded his second shutout in two nights (and the 19th of his NHL career) to lead Chicago to a 4-0 road victory over the Buffalo Sabres.

Esposito earned his 54th career shutout, on Oct. 25, 1975, in the Blackhawks’ 4-0 win at the Kansas City. Forward Pit Martin scored the 250th goal of his NHL career to help in the victory.

On Oct. 25, 1988, Denis Savard scored a goal and added three assists as the Blackhawks ended their eight-game road winless streak in Quebec City, with a 7-4 win over the Nordiques. They had gone 0-6-2 in their eight previous games at the Nordiques.

Finally, on Oct. 25, 1990, Steve Larmer set a Blackhawks’ team record for the fastest regular-season overtime goal by scoring eight seconds into extra time to give the Blackhawks a 3-2 win versus the Washington Capitals.

Hall of Fame goaltender Bill Durnan recorded his 12th career shutout on Oct. 25, 1947, in the Canadiens’ 5-0 win over the Bruins. He finished his career with 34 shutouts in his seven seasons in Montreal.

Jacques Lemaire scored his 4th career hat trick on Oct. 25, 1973, and goaltender Wayne Thomas recorded his second career shutout, as the Canadiens won 4-0 at the Flyers.

Steve Shutt scored his 250th career goal along with four assists on Oct. 25, 1979, as the Habs beat the Pittsburgh Penguins. Pierre Larouche scored four goals, for his fifth career hat trick and his first with the Canadiens. He also added an assist to cap off his five-point night.

On Oct. 25, 1984, Guy Lafleur scored the 518th and final goal with the Canadiens in a 3-2 win over the Sabres. Lafleur retired less than a month later, but returned to the Rangers in 1988 and played three more seasons, including two with the Nordiques.

The Canadiens became the first club in NHL history to record 6,000 career points on Oct. 25, 1997, with a 4-2 road win against the Senators. They reached this milestone in their 4,986th regular-season game.

On Oct. 25, 1950, goaltender Turk Broda recorded his third consecutive shutout, and the 59th of his career, to lead the Maple Leafs to a 1-0 win over the visiting Red Wings.

Goaltender Johnny Bower recorded his first career shutout with the Maple Leafs, and sixth of his career, on Oct. 25, 1958, in their 3-0 over the Red Wings. He recorded 32 shutouts during his 12 seasons with Toronto.

The Maple Leafs scored four goals on just four shots, on Oct. 25, 1988, in the second period of a 4-3 win over the New York Islanders. Ed Olczyk led the scoring with two goals as the Leafs were outshot 34-18.

Finally, on Oct. 25, 2003, Mats Sundin became the fourth player in Leafs’ history to score 300 goals, as Toronto won 4-1 against the visiting Capitals.

On Oct. 25, 1972, the Rangers beat the Flyers 6-1, at Madison Square Garden. Rod Gilbert scored twice to become the third player in franchise history to score 250 goals while wearing the famous “blue shirt.”

Five years later, on Oct. 25, 1977, rookie Ron Duguay scored his first NHL goal and Wayne Thomas got his first shutout for the Rangers, and the sixth of his NHL career, in a 5-0 win at the Cleveland Barons.

Anders Hedberg scored his third career hat trick and added three assists on Oct. 25 1984, to lead New York to an 11-2 win at the New Jersey Devils.

And last, but not least, on Oct. 25, 1990, Brian Mullen had four assists to lead a come-from-behind 5-3 victory over the Flyers on home ice.

Red Wings’ rookie goaltender Roger Crozier recorded his fourth career shutout on Oct. 25, 1964, in Detroit’s 4-0 win at Boston. He racked up 19 shutouts during his seven seasons with the team before being traded to the Sabres in 1970.

The Wings scored four power-play goals on Oct. 24, 1979, and former Penguins’ general manager Jim Rutherford recorded his 14th and final career shutout, in a 4-0 victory over the Sabres.

On Oct. 25, 1991, Vincent Riendeau and Tim Cheveldae combined for the first shared shutout in the 65-year history of the franchise. The two netminders only had to make a combined 13 saves in a 4-0 win versus the Maple Leafs. Riendeau left the game, due to injury, about seven minutes into the second period and got credit for the win. Cheveldae only faced five shots to secure the shutout.

The Flyers signed free-agent right wing Tim Kerr to a professional contract on Oct. 25, 1979. He made his NHL debut the following season and played in 601 games, over 11 seasons, scoring 363 goals and 650 points.

He was in the lineup one year later when Reggie Leach became the fourth player in franchise history to score 250 goals. The milestone came in a 3-1 road win at the Islanders.

On Oct. 25, 1990, Brett Hull became the first player in St. Louis Blues’ history to score a hat trick in consecutive games. He lit the lamp three times in an 8-5 win over the visiting Maple Leafs, 24 hours after scoring three goals in Toronto. Adam Oates had four assists in the winning effort.

The Islanders made a pair of major trades on Oct. 25, 1991. The bigger of the two was sending Pat Lafontaine, Randy Hillier, Randy Wood and a fourth-round draft pick, to the Sabres, for Pierre Turgeon, Uwe Krupp, Benoit Hogue and Dave McLlwain. They also traded Brent Sutter and Brad Lauer to the Blackhawks in exchange for Adam Creighton and Steve Thomas.

On Oct. 25, 2008, Sergei Fedorov netted a pair of goals to lead the Capitals to a 6-5 win at the Dallas Stars. This made him the all-time leader in goals for Russia-born players, with 475, breaking the old record set by Alexander Mogilny. He has since been passed by another Cap, Alex Ovechkin.