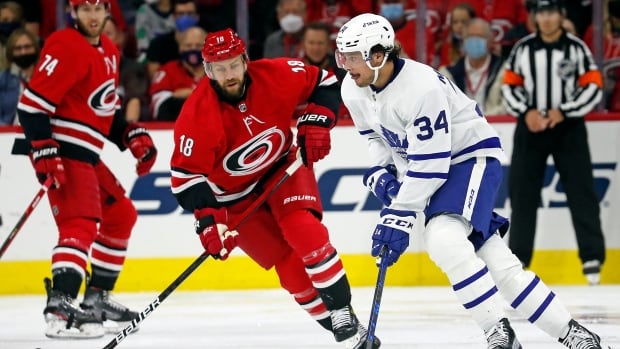 Frederik Andersen made 24 saves against his former team and the unbeaten Carolina Hurricanes matched the best five-game start in franchise history by defeating the struggling Toronto Maple Leafs 4-1 on Monday night.

“This group is going to work hard every night,” Hurricanes coach Rod Brind’Amour said. “We’ve still got some areas to clean up. It’s good that we’re finding ways to win.”

Steven Lorentz pots the winner as Canes defeat the Leafs

Andersen has been the only goalie used by the Hurricanes this season. His latest performance came with personal connections to the opponent.

“I was trying not to think too much about it,” Andersen said. “It was kind of tough mentally to kind of shut that off and not try to analyze every play and what they might do.”

Jack Campbell stopped 31 shots for Toronto, which is 0-3-1 in its past four games and has managed just one goal in three of them.

“We’ve just got to believe,” left wing Michael Bunting said. “I think we’re confident to get out of this rut.”

Auston Matthews opened the scoring for the Maple Leafs with his first goal of the season. His wraparound came 3:25 in.

With the Hurricanes failing to score in the first period, it meant they trailed entering the second for the first time this season.

“I thought our first period was our best period of play and we were down 1-0,” Brind’Amour said. “It was kind of weird how the game kind of went that way.”

Aho and Lorentz scored less than 2 1/2 minutes apart in the second. Aho has a point in every Carolina game this season, while Lorentz got his first goal of the season.

The Maple Leafs were their busiest in the third period, recording nine shots. But they couldn’t solve Andersen again.

“Freddie has just been a rock,” Lorentz said.

Matthews was the NHL leader in goals with 41 last season, so getting him in the scoring column was key. He was without an assist across his first three games as well.

Matthews wasn’t pleased with the outcome, but he tried to find a positive with his goal.

“Hopefully, that’s a good step for me moving forward,” he said.