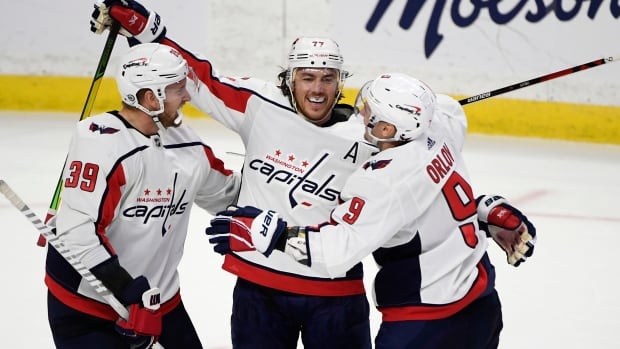 T.J. Oshie had the fifth hat trick of his career and the Washington Capitals downed Ottawa 7-5, but Chabot liked what he saw from the Senators in terms of mental toughness. Ottawa trailed 4-1 after the first period, but came roaring back in the second to tie the game 4-4, and continued to press Washington in the third.

“Obviously, the way we started was not great, but the second period there to come back and prove once again that we’re not going to give up and we’re going to battle until the end,” said Thomas Chabot.

Senators head coach D.J. Smith was also encouraged by Ottawa’s second period, but was disappointed that his team wasn’t able to turn that momentum into a win.

“When you make it 4-4 you’ve got to take the game over,” said Smith. “We made a couple of really bad plays. I think they had three or four goals off face-off wins by us and we just didn’t execute.

“Some guys on our back end didn’t execute and it ended up in our net and when you have guys like [Alex] Ovechkin and [T.J.] Oshie and these guys that can score you can’t make those mistakes if you want to beat them.”

Goaltender Anton Forsberg started the game for Ottawa, but was pulled after allowing four goals on 16 shots. Filip Gustavsson came in late in the first period and finished the game allowing three goals on 15 shots.

Alex Ovechkin extended his point streak to six games with his sixth and seventh goals of the season for Washington (4-0-2). Nick Jensen and John Carlson also scored as Ilya Samsonov made 32 saves for the win.

“It was a fun game for the fans,” said Ovechkin. “Lots of goals, lots of action. We’ll take the two points and move forward.”

What will likely stand out for Smith as he reviews the tape is the glaring gap between his top pairing of Chabot and Artem Zub and his remaining defence tandems.

“Well, they were so much better than any other pair,” said Smith of Chabot and Zub. “It wasn’t close and you don’t want to play them as much as you play them, but ultimately you know, we have three days off between games and you’re trying to win the game.

“Every time those two are out there we have the puck, we’re in the offensive zone and I thought, you know, the other pairs certainly struggled.”

Down 6-4 to start the third, Batherson made it a one-goal game with his third of the night at the six-minute mark, but Ovechkin regained the two-goal cushion with his second of the game midway through the period.

Trailing 4-1, the Senators came roaring back to tie the game, only to give up two late goals to trail 6-4 after 40 minutes.

Tierney made it 4-3 with a power-play goal midway through the period. Shortly after, Batherson drew Samsonov out of position to score the equalizer, for his second of the night.

“Obviously, the more time you’re around you get more comfortable and it was just instincts,” said Batherson of his second goal. “Honestly, you know, I wasn’t really thinking I just kind of did what I did there and I was lucky for it to go in there so I’ll take it and yeah it’s just like I said, the longer you’re around the more confidence I have I find so hopefully that keeps going.”

The night was made that much more special as Batherson’s father was on hand, who lost his hat, as well as some family and friends.

Ovechkin regained the lead as he blocked a Nikita Zaitsev point shot and broke in alone, beating Gustavsson through the legs and with just 7.3 seconds remaining in the period Oshie scored his third of the night.

“I thought he was really good tonight,” said Capitals coach Peter Laviolette of Oshie. “He worked really hard. He turned over a lot of pucks. I thought his line was good. But you could notice, Oshie was moving and making a difference just by the forecheck and turning things over.”

The Senators got the start they were looking for in the first period, but things quickly unravelled.

Batherson opened the scoring by beating Samsonov from outside the right face-off circle.

The Capitals then went on to score four consecutive goals in a span of just over nine minutes.

Oshie took advantage of some poor defensive coverage by Josh Brown as he scored the first two goals. Jensen made it 3-1 and Carlson ended Forsberg’s night as he ripped a shot from the left circle.