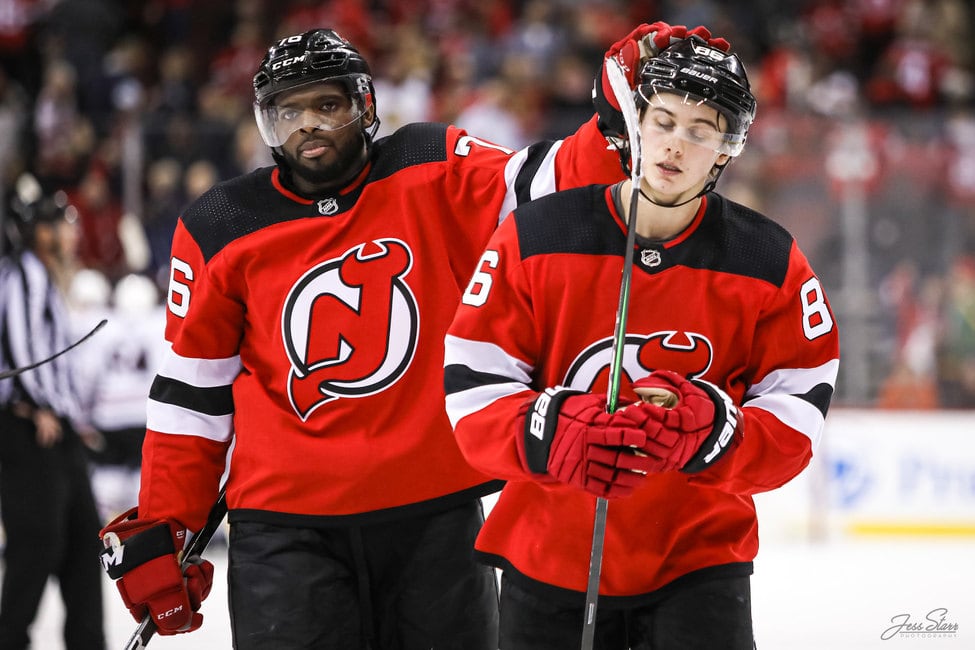 About one week into the season and with four games under their belts, the New Jersey Devils sit with a solid 3-1 record after most recently beating the Buffalo Sabres 2-1 on Saturday night. But as always, a handful of games (especially to begin a season) means a handful of overreactions. Today, we’ll look at three that aren’t worth succumbing to yet, including insights on Jack Hughes’ injury, a familiar result against the Washington Capitals, and the unlikely rise of Nico Daws.

1. Mercer and McLeod Can Make Up for Hughes’ Absence

If you came here looking for kind words of wisdom to soften the blow of Jack Hughes’ dislocated left shoulder, you were mistaken. While no timetable has been provided yet for the young center and surgery will not be required, it’s probably wise to assume that he’ll be missing in action for at least a couple of weeks. And sure – the emergence of Dawson Mercer alongside another year of development for Michael McLeod helps, but the dynamic Hughes brings to the table cannot be replaced.

As displayed in game one of the season versus the Chicago Blackhawks, Hughes can do things that nobody else on the roster can and often has the team play through him offensively at both 5-on-5 and with a man advantage. The Devils’ games against the Capitals and Sabres made that very clear at times when the team noticeably lacked an offensive playmaker. But New Jersey will also miss Hughes’ ability to hound puck handlers – he impressively still leads the league in takeaways (10) despite only playing in two games.

New Jersey’s top-six wasn’t in a great spot anyway before losing their best offensive talent. Unfortunately, the offensive output of three goals in their last two games (with some very shaky periods thrown in) could very well become familiar to the team as they try to tread water without Hughes. His importance to the franchise cannot be overstated.

After last season, where New Jersey went a deflating 0-8 against the Capitals, Thursday night’s 4-1 loss might’ve induced some deja vu for fans. But don’t count on another season series that’s so thoroughly dominated by one side.

Yes, Washington even matched their goals per game average from last season after scoring four against the Devils. And it’s easy to look at that 4-1 final score and lose a lot of faith, but in reality, Jersey played much better than the scoreboard says considering the circumstances. In fact, the Devils actually outshot the Caps 18-14 in the final two periods and accumulated more takeaways (15) than their division rivals (12). Throw in the fact that the aforementioned Hughes was absent along with defenseman Ty Smith and that the Devils were down to their third goalie in Scott Wedgewood, and the whole picture doesn’t look too bad.

Related: Devils Have a Few Positives Despite Loss to the Capitals

Throw out a pretty bad first period, and this game is a whole lot closer even with New Jersey missing three of its most important players. With the Devils at full strength, expect a much more competitive game next time around.

In Saturday’s overtime victory against the seemingly much-improved Sabres, the Devils relied on their fourth goaltender to secure the game. Nico Daws, a 20-year-old playing in his first-ever NHL game, did not disappoint. Stopping 24 out of 25 shots including a selection of big-time stops in critical moments, the performance of the 2020 third-round pick was inspiring to say the least. But it’s best to temper expectations regarding his long-term outlook with the team this season.

In a great turn of events for the Devils, regular starting goaltender Mackenzie Blackwood has reportedly decided to get vaccinated as he continues rehabbing from a heel injury that has kept him sidelined in the early season. This would seemingly put to rest any questions about the 24-year-old’s availability for Canadian road trips and other concerns pertaining to the team’s commitment to him. On another positive note, Blackwood was also seen participating in Tuesday’s morning skate with the rest of his teammates – a solid sign that his rehab is progressing well.

Let’s also not forget that Jonathan Bernier was brought in on a two-year deal by the Devils in order to provide Blackwood with a consistent veteran presence that could both take some weight off of the season workload and serve as a mentor of sorts. When those two are fully healthy, it’s very unlikely that the team strays from that plan. Anyways, Daws was turned to in a moment of desperation by New Jersey. While he did everything they asked of him, they’d probably like to see him get more development in the system before taking on a significant NHL workload.

Vincent Velotta is an NYC based freelance journalist who covers the New Jersey Devils for The Hockey Writers. He has covered sports and entertainment for a variety of outlets including the Village Voice, Minute Media, and more.

Sources: Bruins set to hire Montgomery as coach
Have your say: What should the Leafs do with William Nylander?
Canucks’ Goaltending Is the One Area That Doesn’t Need to Be Addressed
Comets’ Schmelzer leads by example
Sokolov growing complete game